The problem in high concurrency is thread safety, which can be said to be how to deal with the access of shared resources by multiple threads. If it is not handled properly, the result will be completely different from the expectation.

In general, when multiple threads access a variable, they all share their values. Sometimes, although they also access shared variables, each thread needs its own private variables. At this time, ThreadLocal will be useful. Here is a simple example of ThreadLocal:

It's amazing how many resources can be shared without their mutual influence, so it's good to use this. For specific applications, I remember a lot of spring applications, including every connection to the database and session storage.

After thinking about it, if I want to implement it, I will use a map to store it, because this is actually a key value pair, but the key is the only identification of the thread, and the value is the corresponding private variable.

It's almost the same as the source code. However, an internal ThreadLocalMap class and an Entry class are used. The Entry class inherits the weakrefresh class (to be honest, it's the first time to encounter a weak application, but it was only learned in the jvm book). The specific methods are as follows: 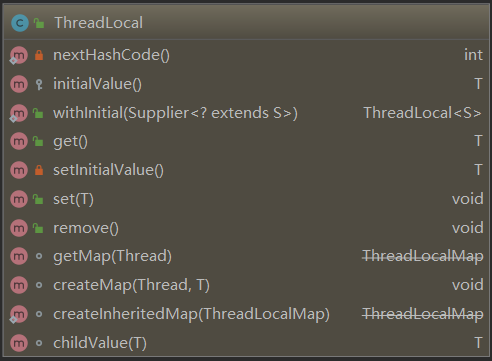 For the getMap method, the ThreadLocalMap object shared by all threads is as follows:

Then enter the Thread class to find the container. Find the following:

At this point, the basic principle of ThreadLocal is very clear: each thread operates on the shared ThreadLocal instance, which is actually used as the key to operate on the internally held ThreadLocalMap object.

There is also the get() method, which is to use the set key to obtain. The remove() method is also similar to the Hashmap in fact, but it is almost the zipper method used to resolve conflicts (by the way, the next time I write a Hashmap, there is also the concurrent Hashmap, which is quite researched). There is a problem here. Because this ThreadLocalMap is static, in the method area (metadata area after jdk8), if it is not recycled, it will cause memory leak and memory overflow. So remember to remove() after use.

Basically, it's OK, but I'm curious about how the ThreadLocalMap can be implemented. I'm also curious about it, so I've also secretly read it, hehe hehe.

ThreadLocalMap belongs to a custom map, which is a static internal class with hash function. In fact, it has nothing to do with the map class provided under java.util package. There is a static Entry class inside. Let's analyze the Entry.

It mainly means that the entry inherits from WeakReference and uses the field referenced by the main method as the key in the entry. When entry.get() == null, it means that the key will no longer be referenced.

Notice that you see a super(k), indicating the construction of calling the parent class. Go and have a look.

There's nothing else on the above. After reading for a long time, I didn't understand it a bit. Then I learned four kinds of quotations and came back to understand it. Because of too much space, I gave two other blogs at the end. I can read them and come back to learn more hahaha.

It is found that there are many internal classes, but it is actually an implementation of map. As mentioned above, the set method is related to the set() method of ThreadLocalMap. The code is as follows:

In fact, it's quite complicated. Specifically, it's normal to use the open addressing method to handle the conflicts. Here, we use the accumulation of a fixed value to solve the conflicts, because multiple instances are shared, and special processing is very powerful.

After reading the source code, I feel refreshed and learned a lot. In the past, java reference only knew four references and corresponding simple concepts. In order to understand this Entry, I learned the source code of weakReference, read other people's blogs about four references and wrote them well. I learned them secretly and knew how to use them. The key points will be used! Of course, it can also be used for ThreadLocal, and it seems that you can write a simple version by hand. You can try it by hand.

It's really great to write about four kinds of reference blogs.