1. Why do I need a thread pool
2. Implement a simple thread pool yourself
3. Thread pool principle
4. Summary

1. Why do I need a thread pool

Pool, as its name implies: it is a place to hold a pile of things. When necessary, take things from the pool. When not in use, put them in the pool. It can be seen that the storage and access are very convenient.

When we are vaccinating, if we want to vaccinate at any time, when we go to the hospital, the doctor needs to change into protective clothing, wear gloves, prepare the vaccine, prepare computer records, etc. 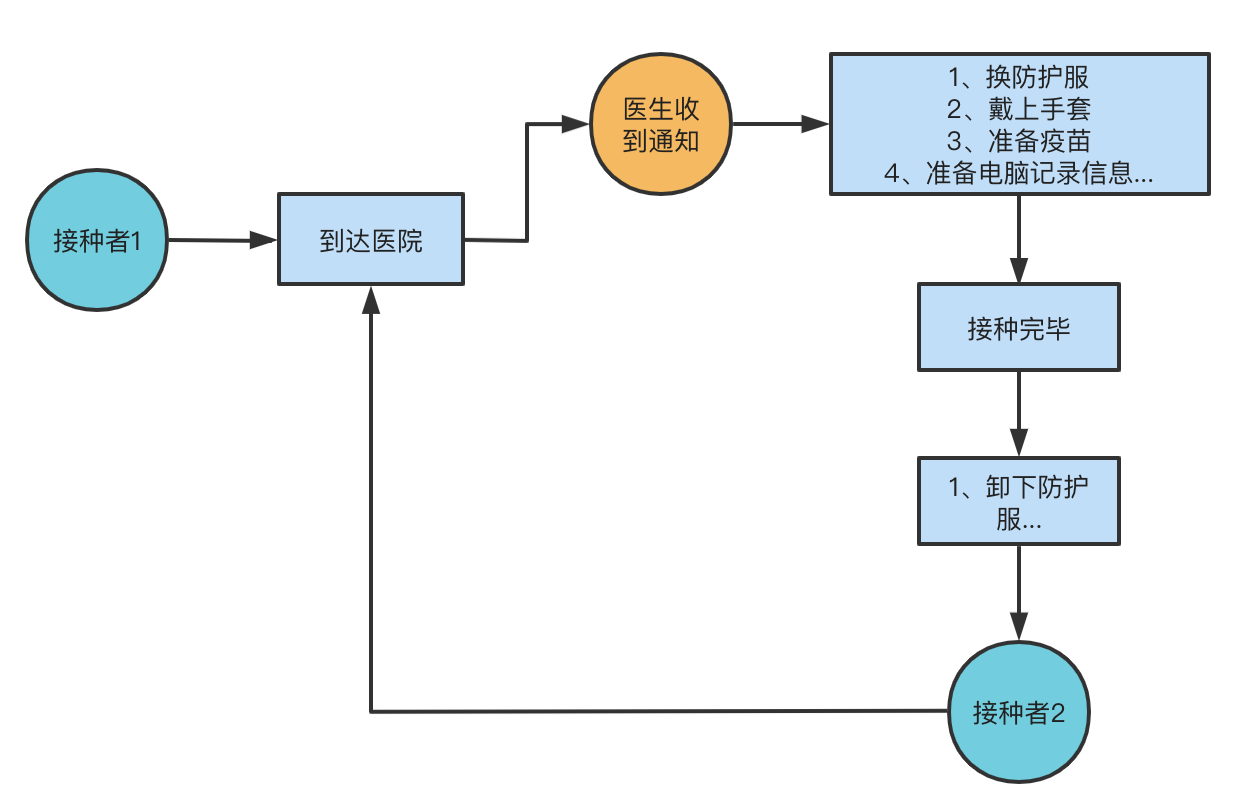 When vaccinator 1 arrives at the hospital, the doctor carries out various preparations. Finally, after vaccinator 1 is vaccinated, remove the equipment. At this time, vaccinator 2 also arrived at the hospital, and the doctor needed to change his equipment. It can be seen that the preparation work of doctors is time-consuming and laborious. If vaccinated at a fixed time, doctors do not need to change equipment frequently, which not only saves doctors' time, but also shortens the waiting time of vaccinators. As shown below: 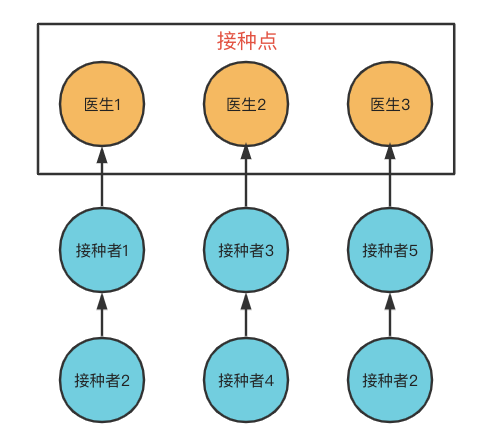 Why do I need a thread pool

As can be seen from the above example, because the preparation of doctors is time-consuming and laborious, they should focus on playing for a period of time before changing equipment. The same is true for threads in computers:

1. Thread switching requires context switching, which involves system calls and occupies system resources.
2. Thread switching takes time. You can't really do anything until you successfully create a thread.
3. Unable to effectively manage threads after threads are turned on.

For the above reasons, thread pool needs to be introduced.

2. Implement a simple thread pool yourself

The thread ends after execution. Now you want it not to end:

The thread is running all the time. If an external wants to submit Runnable to it for operation, it needs to have a shared variable. Select the queue as the shared variable:

Only one thread is opened in the above Demo, which is an endless loop. In the thread body, take out the Runnable from the shared queue shareQueue. If there are elements, take them out for execution. If there are no elements, block and wait.
The external caller can store the Runnable in the shared queue and wait for the thread to execute the Runnable.
Thus, only one thread is running, but different tasks can be executed, and the situation that each task needs to be started for execution is avoided.

Although the above implements thread pool, it is a beggar version, which obviously shows many defects:

1. The thread has been running and cannot be stopped.
2. Only one thread is executing tasks, and other tasks need to be queued.
3. The queue expands infinitely and consumes memory.
4. Other disadvantages

As a general tool library, let's see how Java thread pool is implemented.
The core of the thread pool revolves around an atomic variable: ctl 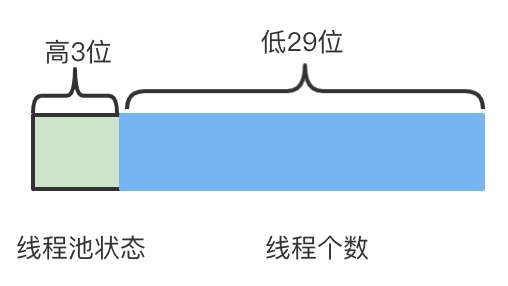 It can be seen that ctl values are judged many times because multiple threads may operate ctl values at the same time. ctl is of AtomicInteger type and CAS is used at the bottom. We know that CAS is unlocked, so we need to judge its state circularly.
Thread pools rely on CAS in many places. It can be said that if you understand CAS, most of you can understand thread pools.
CAS can be viewed step by step: Application and principle of Java Unsafe/CAS/LockSupport

The above codes are shown in the flow chart as follows: 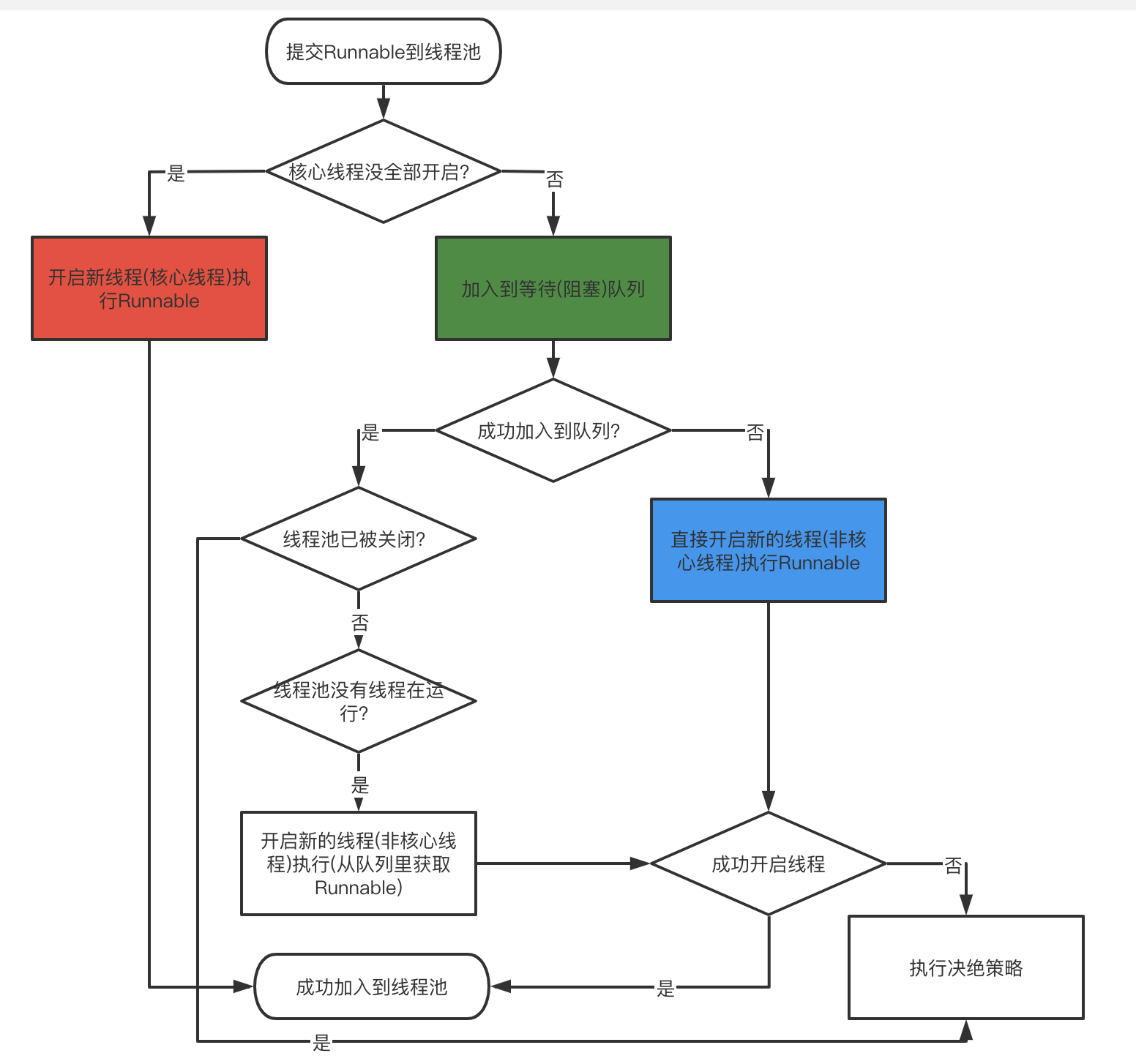 The above process involves several concepts:

In the computer world, analogies can often be found in the real world, or take vaccination as an example:

1. Only four doctors at an inoculation site can vaccinate. These four doctors can be compared with four threads, because they are resident at the inoculation site, so core doctors – > core threads.
2. Four doctors can only vaccinate four people at the same time. When the number of vaccinations at the same time exceeds four, they need to wait in order. This waiting queue is called waiting queue.
3. One day, a lot of people to be vaccinated suddenly came to the vaccination site. The queue was very long, so they really couldn't wait, so they needed the support of doctors from other places. These doctors who come here are not resident here. They will go back after the support is completed, so they can be compared to non core threads.
4. Core thread + non core thread = = maximum number of threads (similar to the maximum number of vaccinated doctors in the vaccination point).
5. Of course, some vaccination sites are short of doctors' resources. The team is too long and there is no doctor from other places to support. They can't finish the fight in a day. Therefore, the remaining vaccinators are told that they can't fight today. Go back. This process can be compared with the rejection strategy. Even if there are other doctors to support, there are still many people waiting for vaccination, which exceeds the vaccination capacity of the vaccination site. At this time, new people waiting for vaccination cannot be vaccinated and will still be rejected. 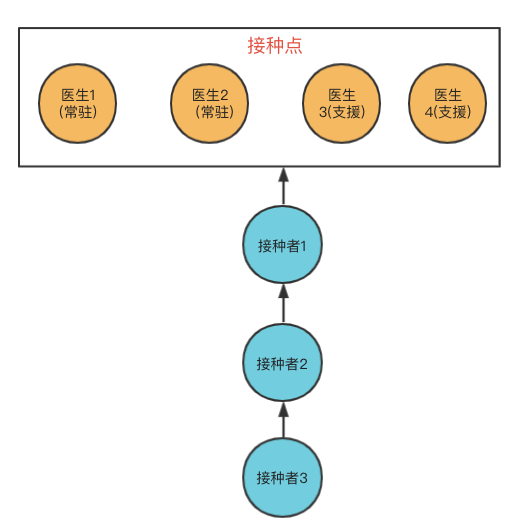 An important method mentioned above: addWorker(xx).

This method has two parameters. The first parameter is Runnable, and the second parameter indicates whether the thread to be added is a core thread.
The above marks two key points:
(1)
Why do you need an endless cycle? Since the ctl variable may be modified by multiple threads, and the ctl is AtomicInteger and the underlying is CAS, it needs to be judged multiple times until the conditions are met.

(2)
Why do I need a lock? Because the worker declares as follows:

The collection may be operated by multiple threads, so its add and remove can only be safely operated after locking.
Worker inherits from AQS and uses AQS to implement its own set of locks (similar to ReentrantLock).
The main information stored is as follows:

Thread objects are stored in workers, and the thread pool controls the number of core / non core threads by managing workers.

Two key points are marked on it:
(1)
In the first Demo of implementing thread pool ourselves, we demonstrated how to keep threads running. Here are two judgment conditions:

The getTask() method is as follows:

It can be seen that:

(2)
Why do I need a lock here?
As mentioned earlier, a lock is required to operate wokers collection: mainLock. Its purpose is to consider the security of adding / deleting collections by multiple threads. Each woker can only be operated by one thread at the same time. It seems that there is no need to lock. In fact, the more important functions of Worker lock are as follows:

Used to skillfully judge whether the thread is running (busy).
When a task is executed, the Runnable.run() method is locked, and the lock is released after execution. Therefore, when it is judged that Woker has not obtained the lock, it indicates that it is waiting to obtain the elements of the queue, and it is idle at this time.

Judging whether the thread is idle or not can be used to provide a basis for the execution of external interrupt thread pool.

So far, we understand the core advantage of thread pool: it does not create threads repeatedly. It relies on the blocking queue feature to make threads resident, as shown in the figure below: 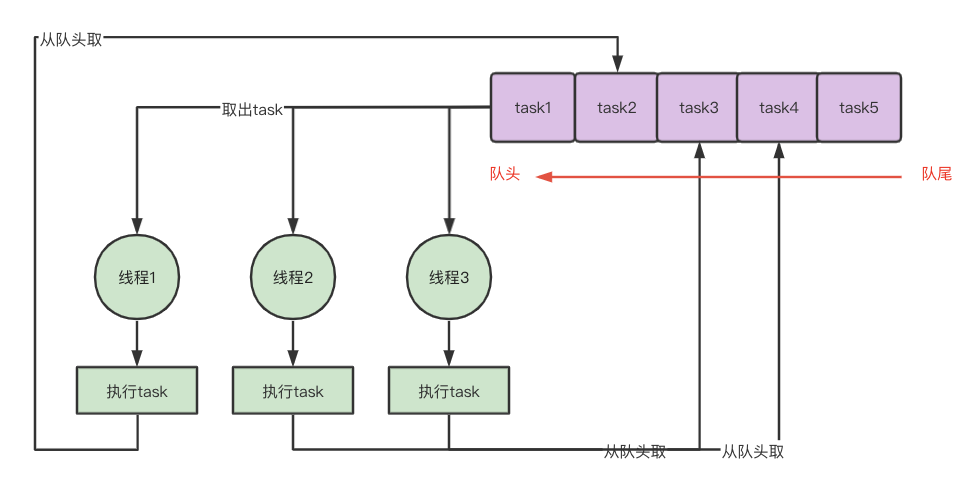 Due to space reasons, the remaining thread pool shutdown, some important runtime states of thread pool, and several simple ways to create thread pool will be analyzed in the next article. Please pay attention!

Demo code If it's helpful, give github a compliment

If you like it, please praise and pay attention. Your encouragement is my driving force

During continuous update, work with me step by step to learn more about Android/Java