Before introducing the concept of polymorphism, let's introduce upward transformation as an introduction.

A variable of Person type can point to an instance of Student type:

This is because Student inherits from Person, so it has all the functions of Person. If a variable of Person type points to an instance of Student type and operates on it, there is no problem!

This assignment to safely change a subclass type into a parent or even ancestor type is called upcasting.

The upward transformation is actually to safely change a subtype into a more abstract parent type:

Note that the inheritance tree is Student > Person > Object, so you can convert the Student type to Person or higher-level Object.

Polymorphism means that the same behavior has multiple different manifestations. That is, for a method call of a certain type, the method it actually executes depends on the method of the actual type at run time. When a method is called on a type, the actual method executed may be an override method of a subclass.

How to achieve polymorphism? There are three necessary conditions for the implementation of polymorphism:

For example, the following code:

After executing the main method, the output result is "eat Apples", that is, the actual call is the eat method rewritten by the Apple subclass.

Note: object polymorphism is only applicable to methods, not attributes. That is, even if the field property is modified by the child object, the modification is not visible when the parent object is called.

Polymorphism has a very powerful function, that is, it allows to add more types of subclasses to realize function expansion without modifying the code based on the parent class.

We can see that at this time, the Connection class only defines a "specification". When using this Connection class, the methods rewritten by subclass objects are actually used. Therefore, polymorphism is often used with abstract classes / interfaces, because the parent class itself often does not need to have a specific method implementation.

(1) Why use downward transformation

Contrary to upward transformation, if a parent type is forcibly transformed into a child type, it is downward casting.

We use the cast type converter () to achieve the downward transformation.

The downward transformation can succeed only when the parent variable points to the child object. For example:

In case of failure, the Java virtual opportunity reports ClassCastException.

(4) How to avoid mistakes

To avoid downward transformation errors, Java provides the instanceof operator to determine whether an instance is a specified type or a subclass of this type:

Why does instanceof determine true for subclass objects of the specified type? In fact, this is also very easy to understand, because whether you are a student or a teacher, you are a person. If someone says you are not human, you are afraid to jump over and hit him. So instanceof is the same.

If a reference variable is null, the judgment of any instanceof is false.

Using instanceof, you can judge the following before the downward Transformation:

Starting from Java 14, after judging instanceof, it can be directly transformed into a specified variable to avoid forced transformation again. For example, for the following code:

It can be rewritten as follows:

This way of using instanceof is more concise. 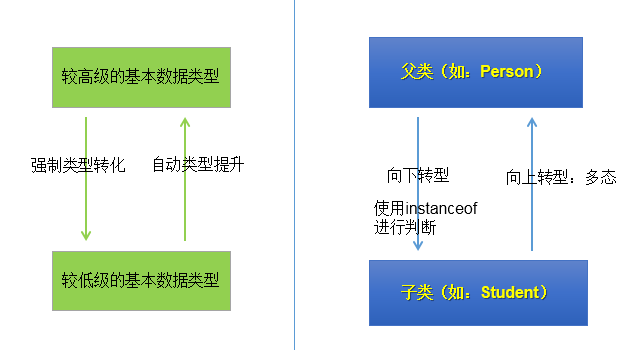