Exclusive Lock is also called exclusive Lock, which means that the Lock can only be held by one thread at A time. If thread T adds an exclusive Lock to data A, other threads cannot add any type of Lock to A. The thread that obtains the exclusive Lock can read and modify the data. The implementation classes of synchronized in JDK and Lock in JUC are mutually exclusive locks.

The following figure shows part of the source code of ReentrantReadWriteLock: 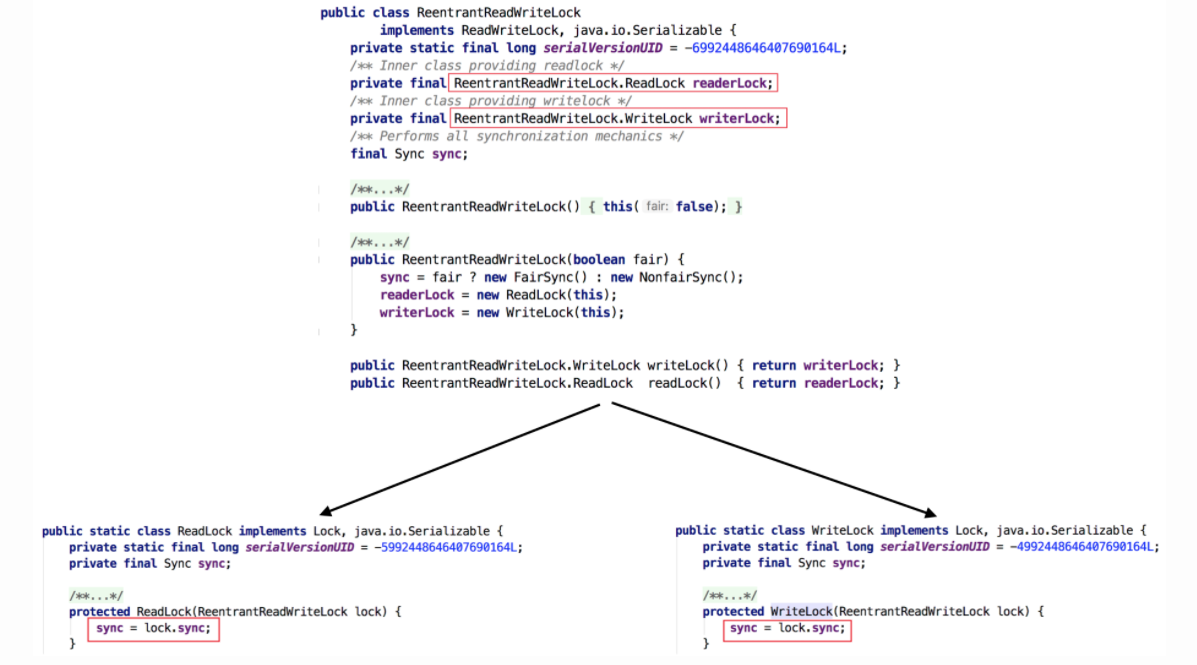 We can see that ReentrantReadWriteLock has two locks: ReadLock and WriteLock, which are known by words. One read lock and one write lock are collectively referred to as "read-write lock". Further observation shows that ReadLock and WriteLock are locks implemented by the internal class sync. Sync is a subclass of AQS. This structure also exists in CountDownLatch, ReentrantLock and Semaphore.

What is the difference between the specific locking methods of read lock and write lock? Before we know the source code, we need to review other knowledge. When we first mentioned AQS, we also mentioned the state field (int type, 32-bit), which is used to describe how many threads hold locks.

Next is the code for reading the lock:

At this point, let's look back at the locking source code of fair and unfair locks in the mutex ReentrantLock:

We found that although there are two kinds of ReentrantLock, fair lock and unfair lock, they add exclusive locks. According to the source code, when a thread calls the lock method to obtain a lock, if the synchronization resource is not locked by other threads, the current thread will successfully seize the resource after successfully updating the state with CAS. If the public resource is occupied and not occupied by the current thread, locking will fail. Therefore, it can be determined that the added locks of ReentrantLock are exclusive locks regardless of read or write operations.