Generalization is a very important feature in our development, especially in scenarios involving collections, polymorphisms or custom classes. But most people, including me, don't have a deep understanding of generics. Most of the time, they only use them when using lists, maps, and other collections. In other cases, they don't use them at all or they don't use them. They can't do it well when coding and designing, so it's time to comb out the knowledge of generics.

With classical collections as an example, before introducing generics, we define a set object that can store any type of data, that is, Object. When acquiring an element, most of the time we need to force the object to a certain data type before we can call its related methods or get some attribute values, that is, we need to know the type of each element explicitly, which makes it very easy to trigger a ClassCastException. The scary thing is that there are no signs of code problems during compilation, and exceptions are raised only when the runtime program executes here and triggers some logic, such as:

You can see that any type, that is, Object type or its subclass type, can be stored in a list. When we take elements, we usually need to cast them:

When we finished writing this program, the IDE did not prompt us for any problems, but ClassCastException was thrown when the program was executed because the second and third elements in the list were not String types.
Since it is a transition error, we should have no problem using the instance of keyword to determine the type of ownership. The improved code is as follows:

The problem is that if we add a new data type (such as a floating point number), the program will add a corresponding type judgment. In daily development, programs are likely to be available to the outside world, and we don't know what types the caller will pass, so how many types should we check to make the program robust, 10, 100 or 1000? By adding so much judgment, the code loses readability and maintainability. Even when the caller passes in a custom type, it is even more impossible to solve the problem by this means.

From Java 5 onwards, we can solve this problem using Generic, which provides a compile-time type safety check mechanism that allows you to determine whether a type matches during compilation, without waiting for runtime, and without having to manually cast elements when they are acquired.

_Generics are essentially parameterized types, in which all operation types are specified as one parameter and can be passed through the entire class or method.

A generic identifier can be any string, typically using only one uppercase letter. Usually common are E, T, K, V, of course can also be defined as A,B,C,D, etc., the number of generic identities can also be any.
A generic defined in a generic class can be understood as a formal parameter of a type, used as a member variable, or as an input to a method or as a return value type of a method, such as:

_Creating generic class objects is similar to creating ordinary objects, but there are many <> to declare the actual generic type, which can be interpreted as an argument, i.e. the member variable, method, or return value type in the currently created object is converted from T to the passed type.

_Examples of commonly used Lists and ArrayList s are:

_The above wording is rather verbose, and two generic actual data types have been defined before and after. After Java7, the generic type on the back can be written-free, and the program recognizes it automatically, leaving the back empty <>.

_Defaults to Object if no generic type is specified.
_mentioned in the introduction to generics, two benefits of generics are that you can check the data type at compile time and you can get it without having to force a type conversion, as you would normally do.

_Analysis: As mentioned above, generics are essentially parameterized types, and generic T can be specified at the time of instantiation, such as TestList <String> list = new TestList <>();, That is, the actual type of generic type T is String, and the generic type in the parent class is also T, which is also String. However, if inconsistent, as in the example above, the generic type E in the parent class cannot be passed through parameterization, the actual type cannot be determined, and the compilation will fail.

_Analysis: Since subclasses are not generic classes, it is natural that generic types cannot be passed to parent classes, so you need to specify specific generic types when defining classes, otherwise you will compile errors. As shown in the example above, if you specify the generic type of ArrayList as Integer, then when you use TestList2, you can call the ArrayList <Integer> related methods.

_The most typical example is the well-known framework, Mybatis-Plus, Mapper and IBaseService interfaces. The following image is taken from Gitee, the official website 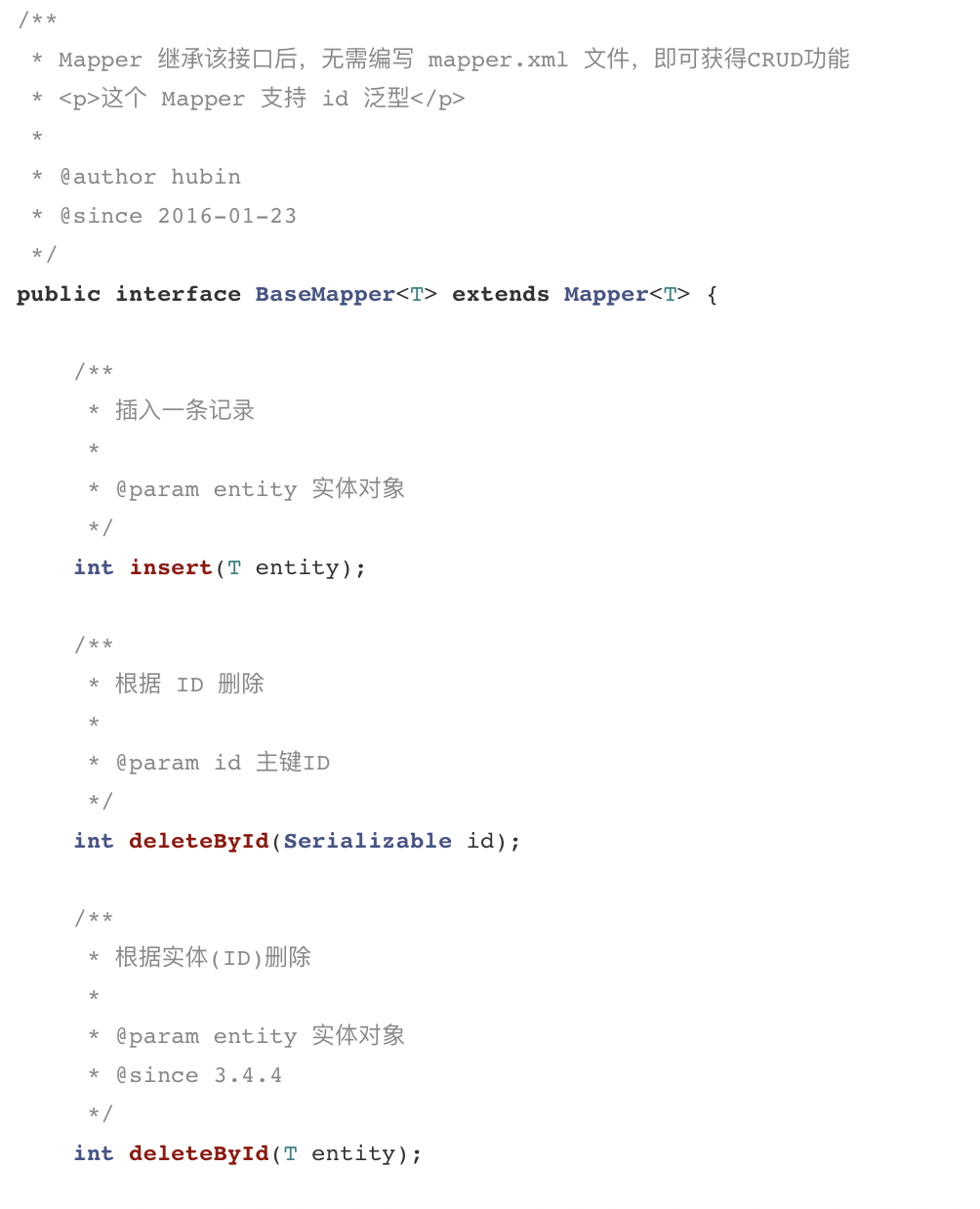 _Use <> to define the generic identity of the method before returning the value type.

_In the above example, TestUtil is not a generic class, but getFirst() is a generic method that uses <T> as the generic identifier, passing in parameters and return values.

_If you want to define a static generic method, you need to add static before the generic identity, which can be changed to

_When this occurs, you can use both generic identities.