I get Aliyun coupon at our small welfare point

1. The articles reproduced in this paper are all from the public network.
2. If the origin labeling is wrong or infringes on the rights and interests of the original author, please contact and delete.
3. Reprint the article, please indicate the link and author of the original text, otherwise any copyright disputes will not be related to this site.

stay Last article
We have a preliminary understanding of lock and Abstract Queued Synchronizer (AQS). In the implementation of synchronous components, AQS is the core part.
The implementer of synchronization component implements the semantics of synchronization component by using the template method provided by AQS, while AQS implements the management of synchronization state and queuing of blocked threads.
Waiting for notifications and other underlying implementation processing. The core of AQS includes these aspects: synchronous queue, acquisition and release of exclusive locks, acquisition and release of shared locks and interruptible locks.
Time-out waiting for locks to capture the implementation of these features, which are actually template methods provided by AQS, is summarized as follows:

When a shared resource is occupied by a thread, other threads requesting the resource will block and enter the synchronization queue. As far as data structure is concerned, queues are implemented in the form of arrays.
The other is in the form of a linked list. The synchronization queue in AQS is realized by chain mode. Next, it's clear that we will at least have the following questions: ** 1. What is the data structure of the node?
2. One-way or two-way? 3. Is it the leading node or the non-leading node? ** We still look at the source code first.

In AQS, there is a static internal class Node, which has some attributes:

The states of nodes are as follows:

Now we know the data structure type of the node, and each node has its predecessor and successor nodes, which is obviously a two-way queue. Similarly, we can use a demo to look at it.

Five threads are opened in the example code, and the lock is acquired first and then sleeped in 10S. In fact, the purpose of sleeping threads here is to simulate the situation of entering the synchronization queue when the thread is unable to acquire the lock. With debug, when Thread-4 (the last thread in this example) fails to acquire a lock and enters synchronization, the current synchronization queue for AQS is shown as follows: 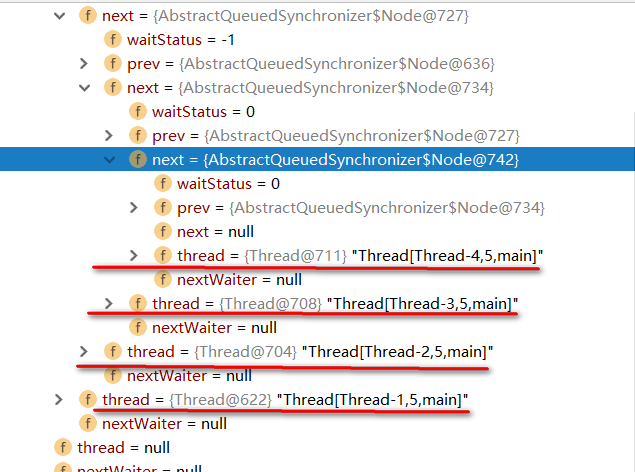 Thread-0 acquires the lock first and then sleeps. Other threads (Thread-1,Thread-2,Thread-3,Thread-4) fail to acquire the lock and enter the synchronization queue. It is also clear that each node has two domains: prev (precursor) and next (successor), and each node is used to save thread references that fail to acquire synchronization status, and so on. Information such as waiting status. In addition, there are two important member variables in AQS:

By understanding the source code and experimenting with it, we can now clearly understand the following points:

Let's continue by looking at the source code and debug. Or take demo as an example. Calling lock() is to get an exclusive lock. If the lock fails, the current thread will be added to the synchronization queue, and if it succeeds, the thread will execute. The lock() method actually calls the ** acquire()** method of AQS, with the following source code

For key information, see the comment. Acquisition does two things based on whether the current synchronization status is successful or not: 1. Successful, the method ends and returns; 2. Failed, the addWaiter() method is called first, and then the acquire Queued () method is called.

When a thread fails to acquire an exclusive lock, it will join the current thread in the synchronization queue. What is the way to join the queue? Next we should look at addWaiter() and acquireQueued(). The addWaiter() source code is as follows:

For analysis, you can see the comments above. The logic of the program is mainly divided into two parts: ** 1. The tail node of the current synchronous queue is null, and the method of enq() insertion is called; 2. If the tail node of the current queue is not null, the method of compareAndSetTail () is adopted to join the queue. ** There's another question: What if (compare AndSetTail (pred, node) is false? The enq() method will continue to be executed, and obviously compareAndSetTail is a CAS operation. Usually, if the CAS operation fails, it will continue to spin (dead loop) to retry. Therefore, after our analysis, the enq() method may undertake two tasks: (1) to process the queue entry operation when the current synchronous queue tail node is null; 2) to spin the attempt if the CAS tail insert node fails. So is it really like what we analyzed? Only the source code will tell us the answer: enq() source code is as follows:

In the analysis above, we can see that the first step is to create the header node, which shows that the synchronous queue is a chain storage structure of the header node. Compared with the non-leading node, the leading node will get more convenience in the operation of queue entry and queue exit, so the chain storage structure of the leading node is chosen for synchronous queue. So what is the timing of queue initialization for the lead node? Naturally, when tail is null, the current thread inserts the synchronization queue for the first time. The compareAndSetTail(t, node) method uses CAS operations to set the tail nodes, and if the CAS operation fails, it will keep trying in the for (;;)for dead loop until it return s successfully. Therefore, the enq() method can be summarized as follows:

Now it's clear how to get the failed threads of exclusive locks wrapped in Node and inserted into the synchronous queue? Then there's the next question? What do the nodes (threads) in the synchronous queue do to ensure that they have the opportunity to acquire exclusive locks? With this in mind, let's take a look at the acquireQueued() method, which is very clear from the method name. The function of this method is to queue up the process of acquiring locks. The source code is as follows:

Program logic has been marked out by annotations, which is a spinning process as a whole (for (; (iv). The code first gets the pioneer node of the current node, if the pioneer node is the head node and succeeds in obtaining the synchronization state (if (p= head & tryAcquire (arg)), which the current node points to. Threads can acquire locks. Conversely, the acquisition lock fails to enter a waiting state. The overall sketch is as follows:

The logic of node queuing for acquiring locks is:

Set the current node as the head node of the queue through setHead() method, and then set the next field of the previous head node as null and the pre field as null, that is to say, the queue is disconnected and memory can be recovered without any reference to facilitate GC. The schematic diagram is as follows:

The key to this method is to call the LookSupport.park() method, which is used to block the current thread, as discussed in a future article. So it should be clear here that acquireQueued() accomplishes two main things in the spin process:

After the above analysis, the acquisition process of exclusive locks, that is, the execution process of acquire() method, is shown in the following figure: 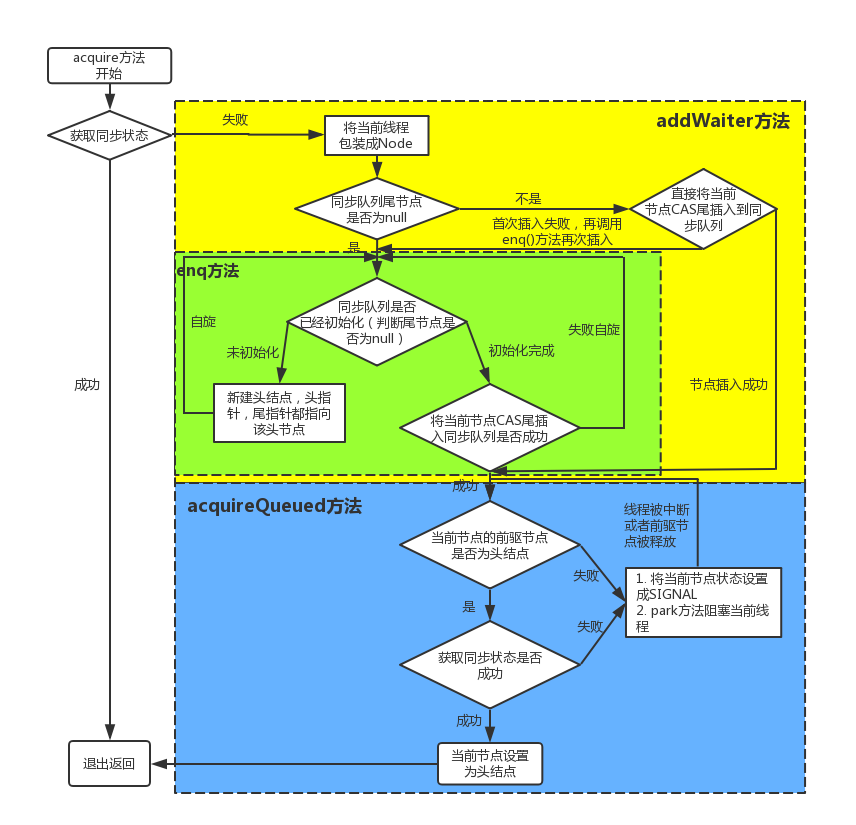 Release of exclusive locks is relatively easy to understand. Look at the source code first without much nonsense.

This code logic is easy to understand. If the synchronization state release is successful (tryRelease returns true), the code in the if block will be executed. The unparkSuccessor() method will only be executed if the head er point is not null and the status value of the node is not zero. UnparkSuccessor method source code:

Now we have finally bitten off a hard bone. We have learned the acquisition and release of exclusive locks and the synchronization queue very profoundly by learning the source code. May make a summary:

We know that lock has some more convenient features than synchronized, such as responding to interrupts and waiting overtime. Now we still use the way of learning source code to see how interrupts can be responded to. The interruptible lock callable method lock. lock Interruptibly (); and the bottom of this method calls the acquireInterruptibly method of AQS with the source code as follows:

The doAcquireInterruptibly method is invoked when the synchronization status is failed:

See the comment for the key information. It's easy to see this code now. It's almost the same as the acquire method logic. The only difference is that when the parkAndCheck Interrupt returns true, the thread is interrupted and the code throws an interrupt exception.

By calling lock.tryLock(timeout,TimeUnit) to achieve the effect of timeout waiting for the acquisition of locks, this method will return in three cases:

We still learn how to implement it by reading the source code. This method calls the method tryAcquireNanos() of AQS. The source code is:

Obviously, this source code ultimately relies on the doAcquireNanos method to achieve the effect of timeout waiting. The source code of this method is as follows:

The program logic is shown in the figure. 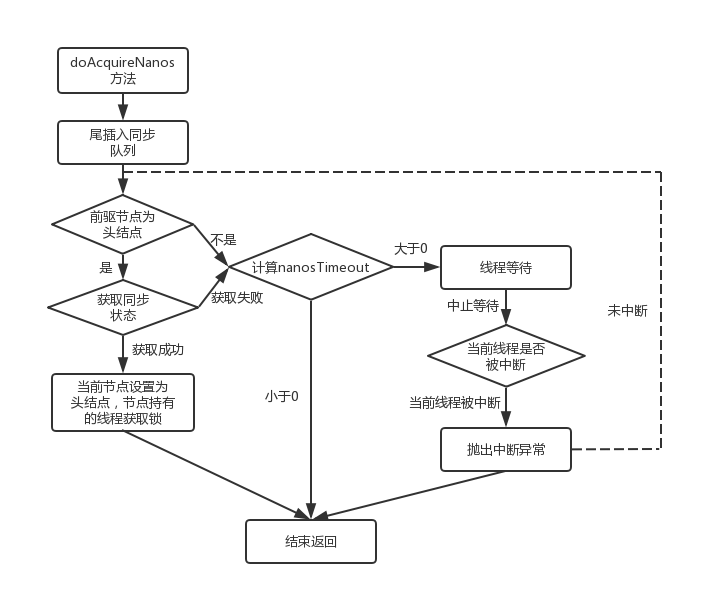 Program logic is basically the same as exclusive lock response interrupt acquisition. The only difference is that after acquisition failure, in dealing with the timeout time, the theoretical deadline will be calculated according to the present time and timeout time in step 1. For example, the current time is 8 H10 min, and the timeout time is 10 min. Then, according to deadli, the theoretical deadline will be calculated according to the current time and timeout time. NE = System. nanoTime () + nanosTimeout calculates that the system time that just reaches the timeout time is 8h 10min+10min = 8h 20min. The deadline - System.nanoTime() can then be used to determine whether the timeout has been exceeded. For example, the current system time is 8h 30min, which obviously exceeds the theoretical system time of 8h 20min. The deadline - System.nanoTime() is calculated as a negative number, and will naturally return false between the If judgments in step 3.2. If the if in step 3.2 is true, it will continue to execute step 3.3 to block the current thread through LockSupport.parkNanos. At the same time, the interrupt detection is added in step 3.4. If the interrupt is detected, the interrupt exception is thrown directly.

After talking about AQS's implementation of exclusive locks, let's continue to work together to see how shared locks are implemented. The acquisition method of shared lock is acquireShared, and the source code is:

Would it be easy to see this code now? Logic is almost identical to the acquisition of exclusive locks, where the spin process can exit if the precursor node of the current node is the head node and the return value of tryAcquireShared(arg) is greater than or equal to zero.

The release of shared locks in AQS calls the method release Shared:

When the synchronization state is successfully released, tryReleaseShared continues to execute the doReleaseShared method:

This method is slightly different from the exclusive lock release process. In the release process of shared lock, for concurrent components that can support multiple threads accessing at the same time, it is necessary to ensure that multiple threads can safely release the synchronization state. The CAS guarantees adopted here are repeated in the next cycle when the CAS operation fails to continue. Try.

Art of concurrent programming in java 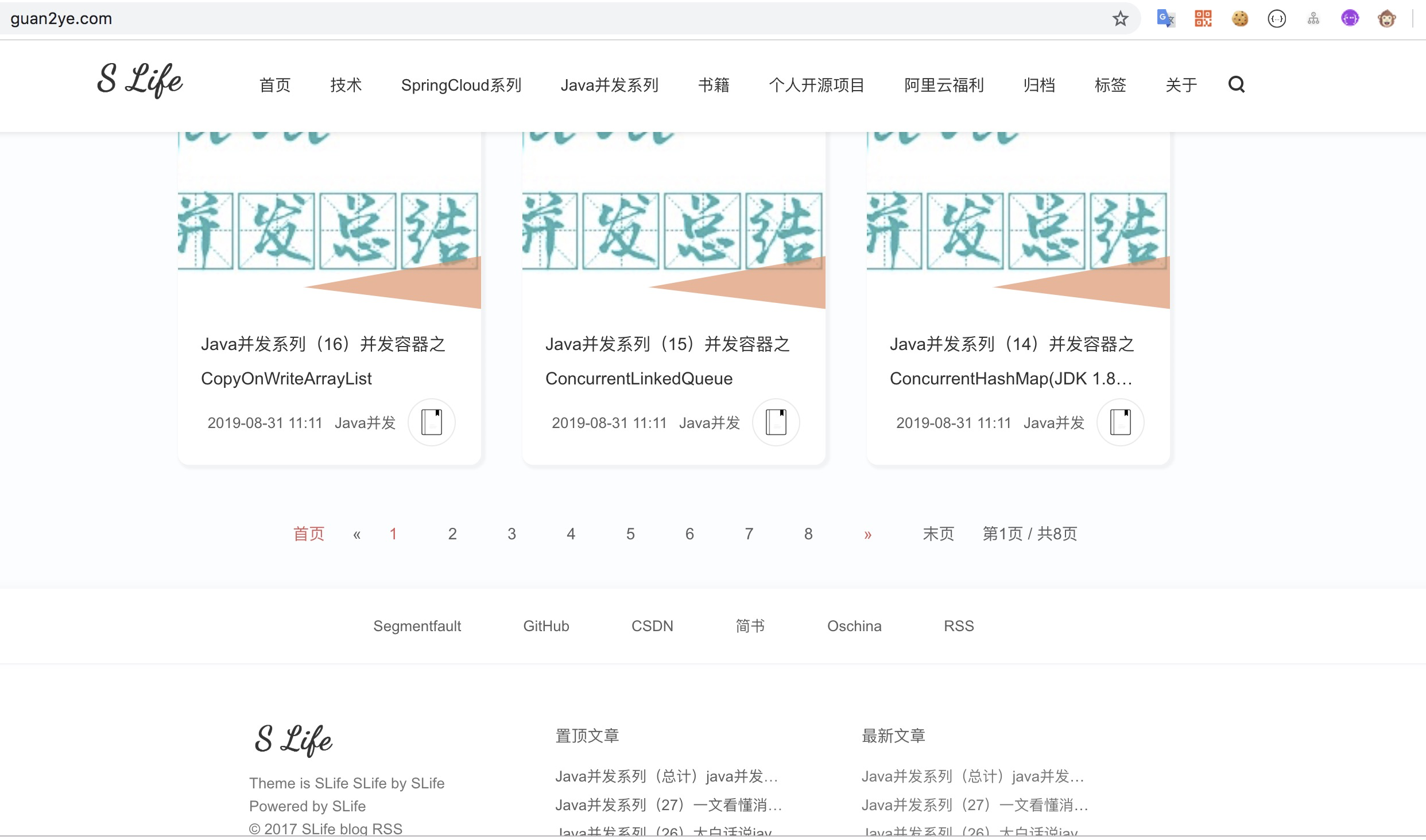