Jacko teaches you about dynamic agents

In short, the proxy mode is to use the proxy object to replace the access to the real object, so that it can provide additional function operations and expand the function of the target object without modifying the original target object.

The agent model has three roles:

Generally speaking, the main function of proxy mode is to expand the function of the target object. For example, you can add some additional operations before and after the execution of a method of the target object without modifying the original code of the method. If you have learned AOP of Spring, you will be able to understand this sentence well.

Then why do proxy classes and delegate classes implement the same interface?

In order to maintain the consistency of behavior, there is no difference between the two in the eyes of visitors. In this way, through the middle layer of proxy class, the delegate class object is well hidden and protected, which can effectively shield the direct access of the outside world to the delegate class object. At the same time, you can also add additional operations to the agent class. For example, the intermediary will talk about the price with the landlord. In the view of the landlord, you also talk about the price when renting a house. Therefore, this realizes the enhancement of the function of the entrustment class.

What is a static proxy

Let's first look at the implementation steps of the static agent:

From the perspective of implementation and application, the enhancement of each method of the target object in the static proxy is done manually, which is very inflexible (for example, once the method is added to the interface, the target object and proxy object must be modified) and troublesome (a proxy class needs to be written separately for each target class). There are very few actual application scenarios, and there is almost no scenario of using static agents in daily development.

From the JVM level, the static proxy will turn the interface, delegate class and proxy class into actual. Class files at compile time.

Here is an example:

1) Define the interface for sending SMS

So, how to use this enhanced send method?

From the output, we can see that we have enhanced the send() method of the delegate class SmsServiceImpl.

The above process is abstracted as follows: 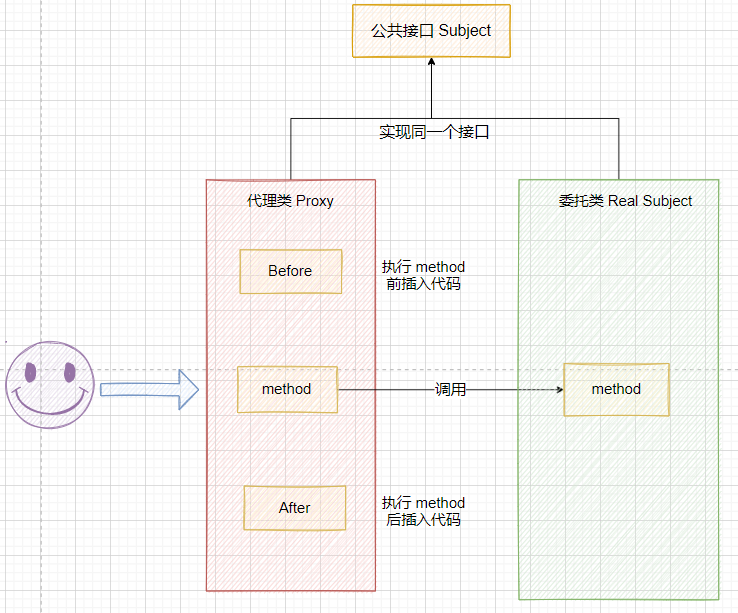 Before formally introducing the play of dynamic proxy, let's take a look at the. class bytecode file. The dynamic proxy mechanism is closely related to the Java bytecode generation framework.

We know that a class class corresponds to a. Class bytecode file, that is, all the information of a class is stored in the bytecode file. Bytecode is actually a binary file, which contains machine code that can only be recognized by the JVM.

The parsing process is as follows: the JVM reads the. Class bytecode file, takes out the binary data, loads it into memory, parses the information in the bytecode file, and generates the corresponding class object: 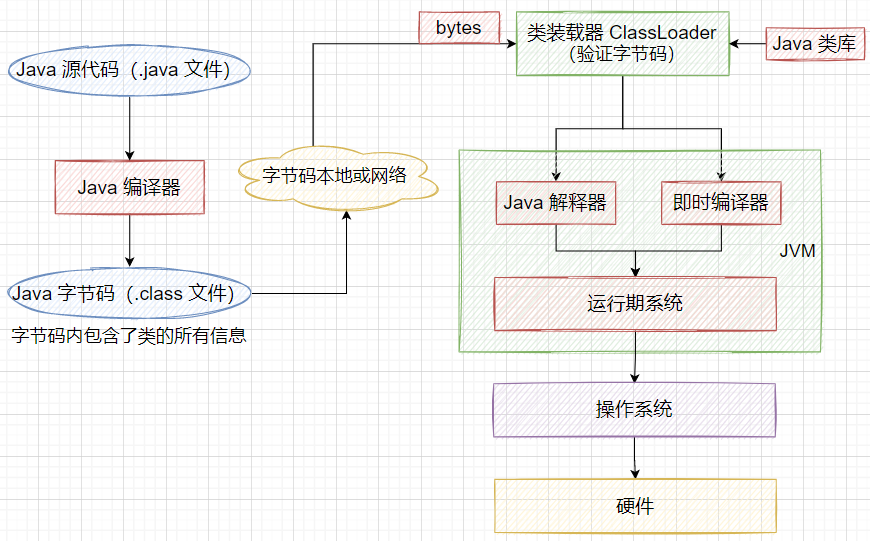 Obviously, the above process occurs at compile time.

Well, since the JVM loads classes through. Class bytecode files (that is, binary information), if we follow the Java compilation system to organize the format and structure of. Class bytecode files, generate corresponding binary data, and then load and convert the binary data into corresponding classes. In this way, we have completed the dynamic creation of a class at run time. This idea is actually the idea of dynamic agent. 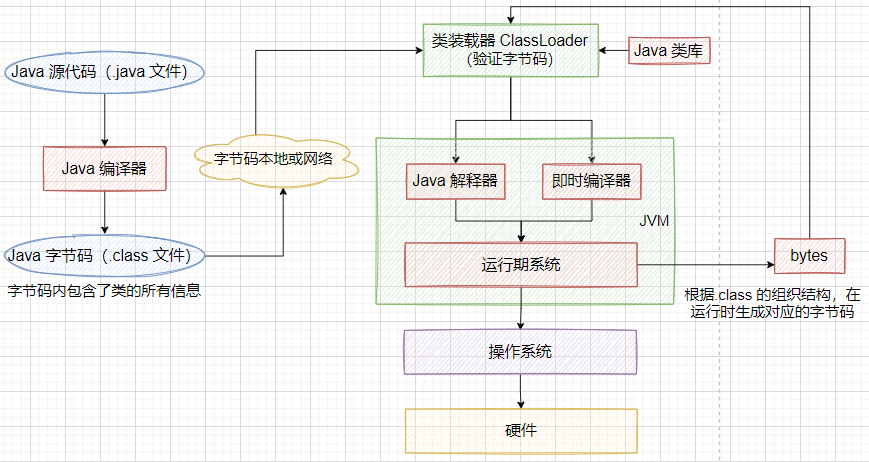 In the run time, the corresponding binary data is generated according to the organization rules of. class bytecode files in the JVM specification. At present, there are many open source frameworks that can complete this function, such as:

It should be noted that CGLIB is based on ASM. Here is a brief comparison between ASM and Javassist:

In general, ASM is much faster than Javassist and provides better performance, but Javassist is relatively easier to use, and both have their own advantages.

Taking Javassist as an example, let's take a look at the power of these frameworks to generate. class bytecode files at run time.

Normally, the code for creating a class is as follows:

Next, create as like as two peas of Programmer class by Javassist,

Open Programmer.class through the decompile tool to see the following code:

We found it as like as two peas we created above.

Now that you know the Java bytecode generation framework, you can start learning about dynamic proxies.

From the perspective of JVM, dynamic agent dynamically generates. class bytecode files at runtime and loads them into the JVM. We have already mentioned this in the Java bytecode generation framework.

There are many ways to implement dynamic agents, such as:

Let's introduce them one by one.

The method has the following three parameters:

That is to say, when the Proxy object created through newProxyInstance() of Proxy class calls the method, it will actually call the invoke() method of the processing class that implements the InvocationHandler interface. You can customize the processing logic in the invoke() method, such as what to do before and after the method is executed. This invoke() Method will be reflected to call the method of the delegate class.

To solve this problem, we can use CGLIB dynamic proxy mechanism.

As mentioned above, CGLIB (Code Generation Library) It is a Java bytecode generation framework based on ASM, which allows us to modify and dynamically generate bytecode at runtime. The principle is to generate a subclass through bytecode technology, intercept the calls of parent class methods in the subclass, and weave additional business logic. Key words: have you noticed, intercept! CGLIB introduces a new role, method interceptor meth Odinterceptor. Similar to the InvocationHandler in JDK, it is also used to realize the unified calling of methods. See the following figure:

Note: in addition, because CGLIB inherits, the proxied class cannot be modified by final.

Let's look at the steps of using CGLIB dynamic agent:

2) Create a method interceptor to implement the interface MethodInterceptor, and override the intercept method. Intercept is used to intercept and enhance the methods of the delegate class (similar to the invoke method in JDK dynamic proxy InvocationHandler)

The method has four parameters:

2) Create a method interceptor to implement the interface MethodInterceptor, and override the intercept method

From setSuperclass, we can see why CGLIB is based on inheritance.

3) In terms of their efficiency, JDK dynamic agent is more efficient in most cases. With the upgrade of JDK version, this advantage is more obvious.

In a word, Javassist dynamic proxy mechanism is also common. Like CGLIB, as a Java bytecode generation framework, Javassist naturally has the ability to dynamically create a class at runtime, so it is natural to implement dynamic proxy. Dubbo uses Javassit for dynamic proxy by default.

1) One design principle in the design pattern is the open close principle, that is, it is closed for modification and open for extension. We sometimes take over many previous codes in our work. The code logic is confusing, so it is difficult to modify the code. At this time, we can enhance the class through the agent.

2) When we use the RPC framework, the framework itself cannot know which interfaces and methods each business party wants to call in advance. At this time, you can use dynamic proxy to establish an intermediary for the client, which is also convenient for the framework to build logic. To some extent, it is also a manifestation of the loose coupling between the client code and the framework.

3) Spring's AOP mechanism also uses dynamic proxy, which will not be discussed in detail here.

1) Flexibility: dynamic proxy is more flexible. It does not need to implement interfaces. It can implement classes directly, and it does not need to create a proxy class for each target class. In addition, in static proxy, once a new method is added to the interface, the target object and proxy object must be modified, which is very troublesome

Well, that's all for our dynamic agent. Brother Jie has learned how to read it. Can't you?