PS: This article is detailed, so it is long. Reading time: 30m~1h. Please read it carefully. I hope you can have a clear understanding of unified exception handling in an hour.

In the process of software development, it is inevitable to deal with all kinds of exceptions. For myself, at least more than half of the time is dealing with all kinds of exceptions, so a large number of try {...} catch {...} finally {...} code blocks will appear in the code, which not only has a large number of redundant code, but also affects the readability of the code. Compare the following two figures to see which style of code you are writing now? Then which coding style do you prefer?
Ugly try catch code block 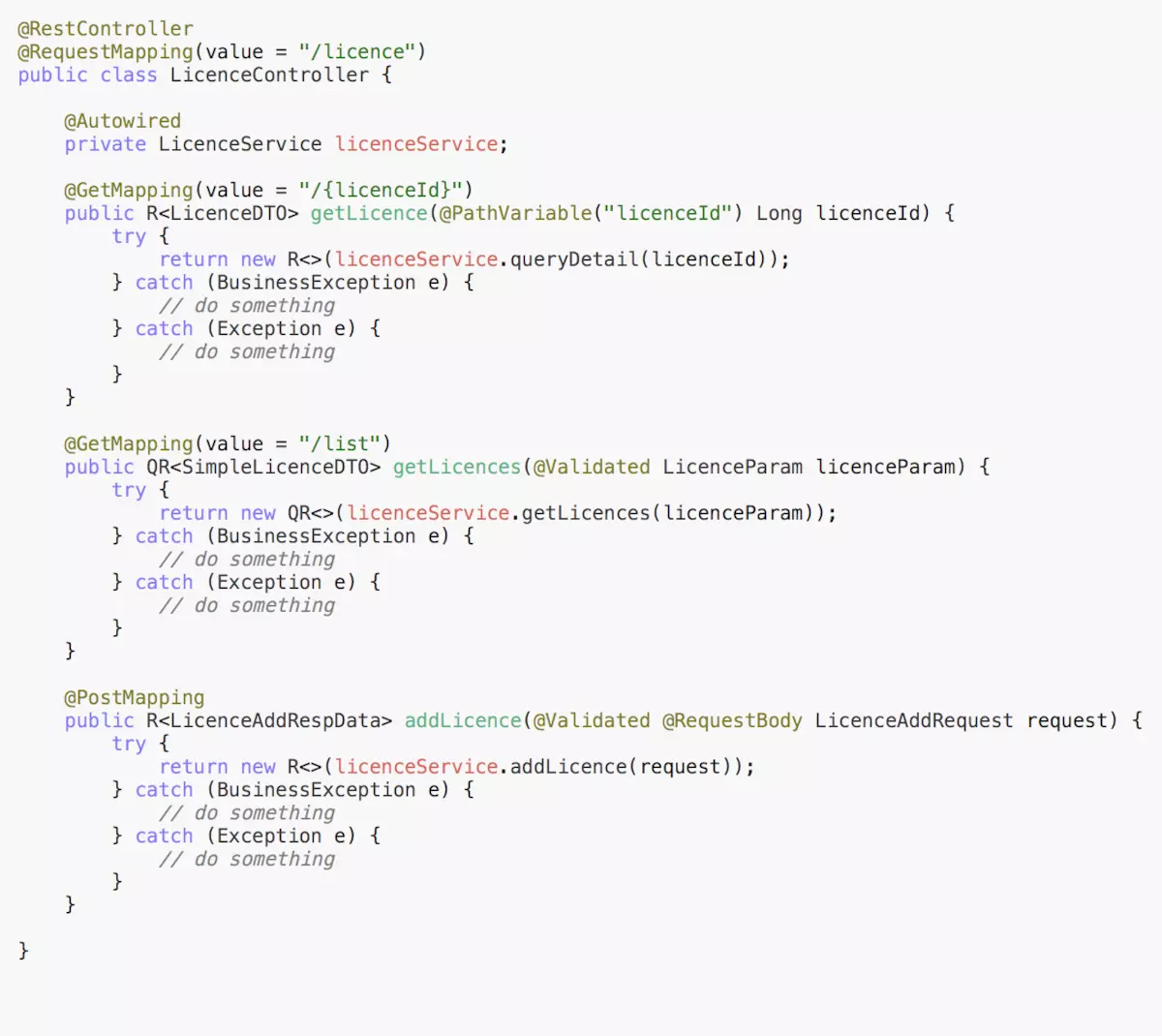 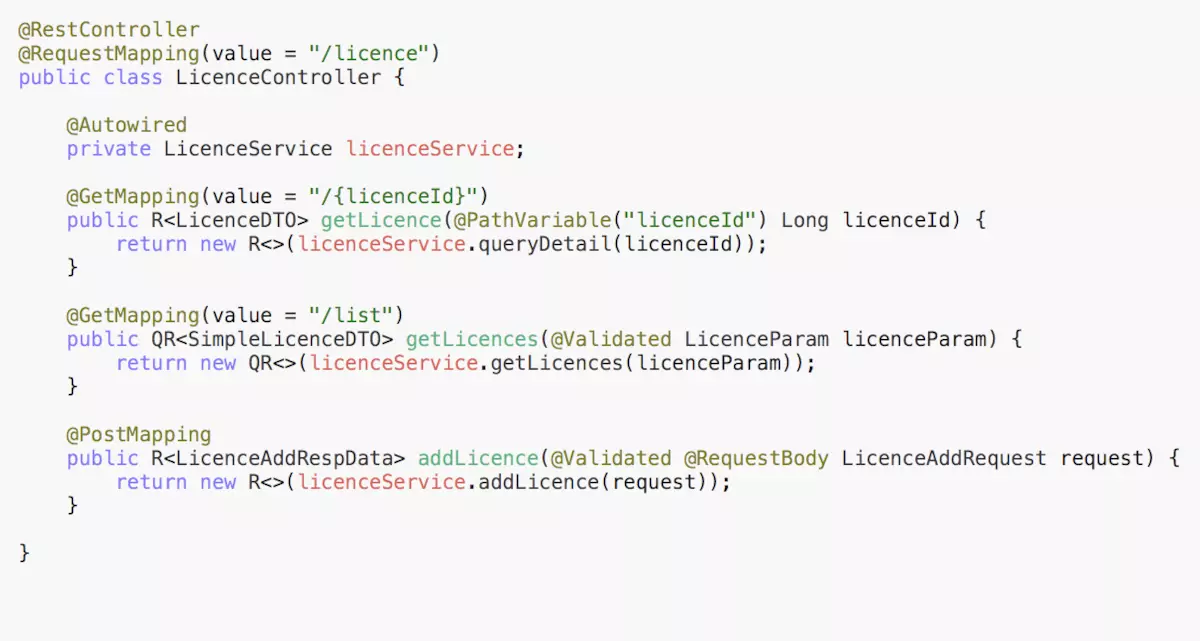 The above example is only in the Controller layer. If it is in the Service layer, there may be more try catch code blocks. This will seriously affect the readability and "Aesthetics" of the code.

So if it's me, I definitely prefer the second one. I can focus more on the development of business code, and the code will become more concise.

So the question is, how to handle all kinds of exceptions gracefully?

2. What is unified exception handling

However, in this way, you must define a set of such exception handling methods in each Controller class, because exceptions can be various. In this way, a lot of redundant code will be generated, and if you need to add an exception handling logic, you must modify all Controller classes, which is not elegant.
Of course, you might say, then define a base class similar to BaseController. Although this approach is correct, it is still not perfect, because such code is invasive and coupling. Simple Controller, why do I have to inherit such a class? What if I have inherited other base classes. As we all know, Java can only inherit one class.

This is the principle of unified exception handling.

Note that exceptions are classified by stages, which can be roughly divided into exceptions before entering the Controller and Service layer exceptions. For details, please refer to the following figure:
Anomalies at different stages

Everyone must be familiar with assert. For example, org.springframework.util.Assert of the Spring family is often used when we write test cases. Using assertion can make us feel very smooth when coding, such as:

Do you feel that the first way to judge non emptiness is very elegant; The second is the relatively ugly if {...} code block.
So what's behind the magic Assert.notNull()? The following is part of the source code of Assert:

It can be seen that Assert actually helps us encapsulate if {...}. Although it is very simple, it is undeniable that the coding experience has been improved to at least one level.
We should also imitate org.springframework.util.Assert and write an assertion class. However, the exceptions thrown after assertion failure are not built-in exceptions such as IllegalArgumentException, but our own defined exceptions. Let's try it.

Note:
Only part of the source code of the Assert interface is given here. Please refer to for more assertion methods Source code.
BaseException is the base class for all custom exceptions.
Defining the default method in the interface is the new syntax of Java 8.

After seeing this, you may have such a question. According to the above statement, how many exceptions do you have to define the same number of assertion classes and exception classes? This is obviously anti human! Don't worry, just listen to me.

The custom exception BaseException has two attributes, code and message. Do you think any class will define these two attributes? Yes, enumeration classes. Let's see how I combine Enum and Assert. I believe I will brighten your eyes. As follows:

Then let's look at how to use it. Suppose that the licenseservice has a method to verify whether the license exists, as follows:

If you do not use assertions, the code might be as follows:

Next, these exception handlers are described in detail.

Parameter verification is abnormal, which will be described in detail later.

Parameter verification is abnormal, which will be described in detail later.

Handle all unknown exceptions, such as those that failed to operate the database.

As mentioned above, when the request does not match the controller, a NoHandlerFoundException exception will be thrown, but this is not the case by default. By default, a page similar to the following will appear: Whitelabel Error Page

How does this page appear? In fact, when 404 occurs, it does not throw exceptions by default, but forward to the / error controller. spring also provides the default error controller, as follows: BasicErrorController 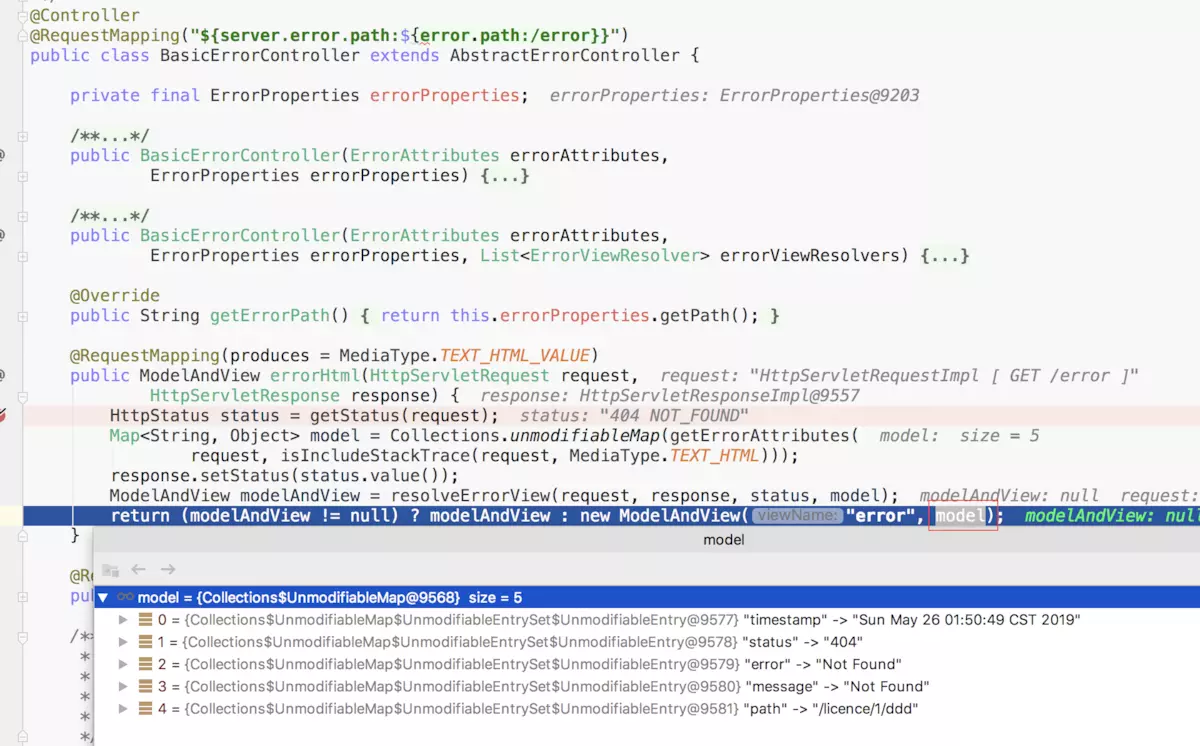 Then, how to make 404 throw exceptions? Just add the following configuration in the properties file:

In this way, it can be captured in the exception handler. Then, as long as the front end captures a specific status code, it can immediately jump to page 404. For details, please refer to Single Page Applications with Spring Boot. Catch the exception corresponding to 404 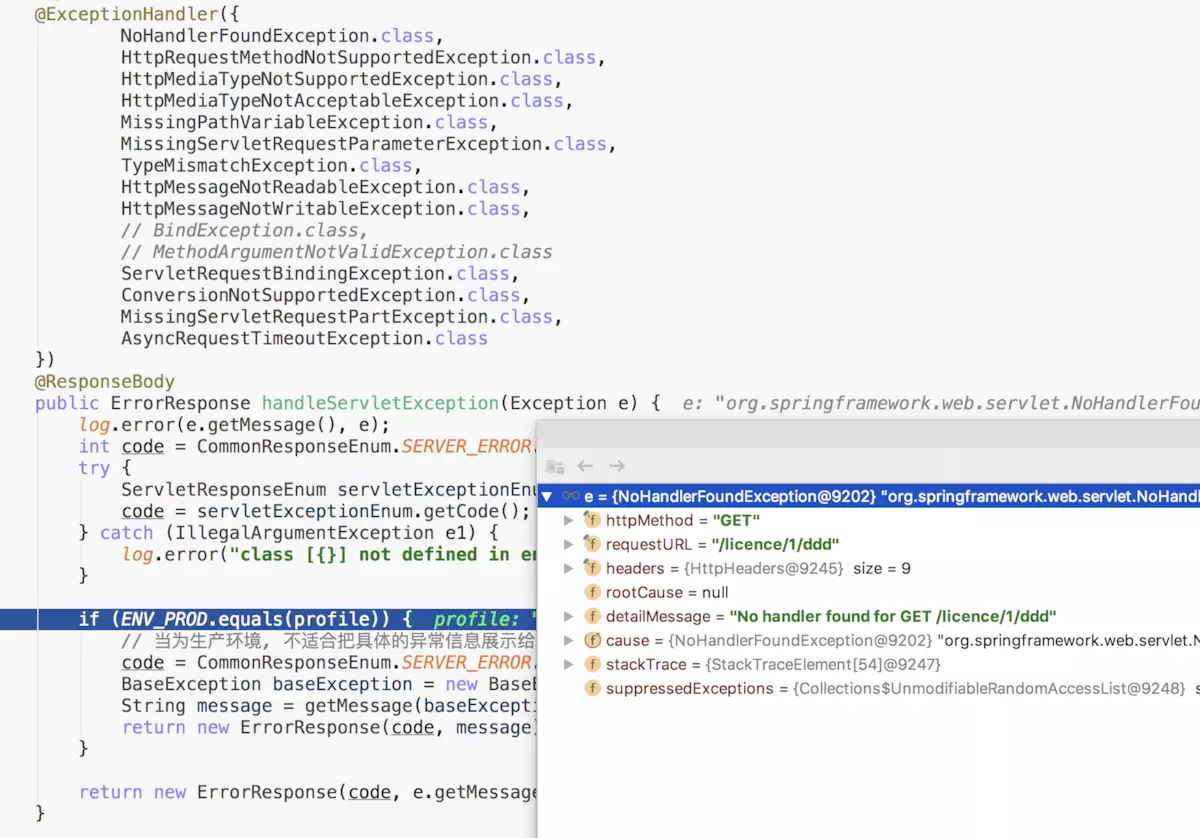 Before verifying the unified exception handler, by the way, the unified return result. To put it bluntly, it is actually to unify the data structure of the returned results. code and message are mandatory fields in all returned results. When data needs to be returned, another field data is required to represent it.

The encapsulation result classes of the original author are as follows:

The definitions of all return result classes are not posted here. You can view the source code directly.

In the future, you only need to introduce the common package as follows:

Since the knowledge related to internationalization does not belong to the scope introduced in this article, there will be a separate article in the future.