Interface is one of the basic features of GO language. It can be understood as a type of specification or convention. It's different from java and C ා in that it doesn't need to show that it implements an interface. It doesn't inherit or subclass or "implements" keywords. It just implicitly implements the methods in the interface in the form of conventions. Therefore, the interface in Golang makes coding more flexible and extensible.

How to understand the interface in go? Just remember the following three points.

The above shows the syntax of the interface, and the polymorphism in the main function.
The same phone's abstract interface points to different entity objects and calls the call() method. The printing effect is different, so it reflects the polymorphism. 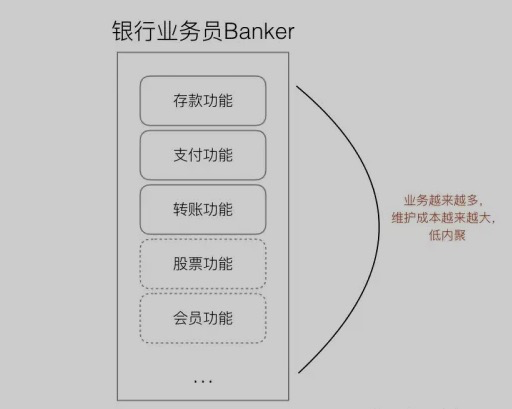 Such a design will lead to that when we add a new business to the Banker, we will directly modify the original Banker code, so the function of the Banker module will be more and more, and the probability of problems will be more and more. If at this time the Banker has 99 businesses, now we need to add the 100th business, which may be caused by carelessness once, so the previous 99 businesses are also one Because all businesses are in the same Banker class, their coupling is too high, the responsibilities of bankers are not single, and the cost of code maintenance increases exponentially with the complexity of the business. 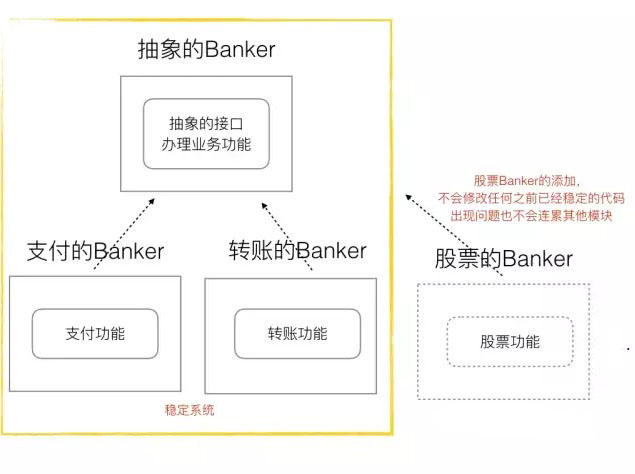 Then you can still handle the needs of the program. Then, when we want to add additional functions to the Banker, we used to modify the content of the Banker directly. Now we can define a stock Banker (implement the stock method) into the system separately. Moreover, the success or failure of the implementation of the stock Banker will not affect the previous stable system. It is single and independent.

Therefore, when we add a function to a system, it is not done by modifying the code, but by adding the code. That is the core idea of the opening and closing principle. Therefore, in order to meet the above requirements, it is necessary to provide an abstract interface.

The golang code is implemented as follows:

Of course, we can also design a small framework according to AbstractBanker

In main, business calls can be implemented as follows:

Definition of opening and closing principle:
A software entity such as classes, modules, and functions should be open to extension and closed to modification.
In short, when modifying requirements, we should try to implement changes through extension rather than by modifying existing code.

Well, now that the interface has been basically understood, where is the meaning of the interface? Presumably now you have a preliminary understanding. In fact, the greatest significance of the interface is to realize the idea of polymorphism, that is, we can design the API interface according to the interface type, so the adaptability of this API interface can not only adapt to all the modules implemented at present, but also Adapt to the future implementation of the module to call. Calling the future may be the most significant point of an interface, which is why an architect is so valuable, because a good architect can design a framework for an interface, which will still be applicable in many years to come.

The principle of dependency inversion in object-oriented 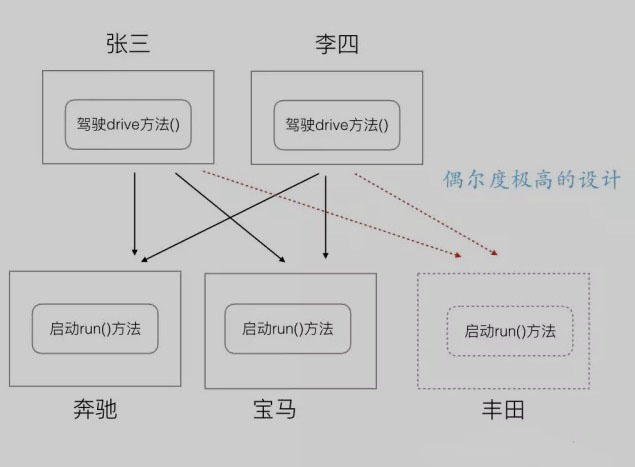 Let's look at the dependency relationship between the above code and each module in the figure. In fact, we don't use any
The interface layer code of interface layer. Obviously, in the end, our two businesses Zhang Sanjiao Benz, Li sixkai BMW, Zhang Sanjiao Benz and Li sixkai BMW are all implemented in the program. But the problem of this design is that small scale is no problem, but once the program needs to be expanded, for example, I want to add a Toyota Motor or driver Wang Wu, then the dependency between modules and modules will increase exponentially, and it is more and more difficult to maintain and smooth like spider web. 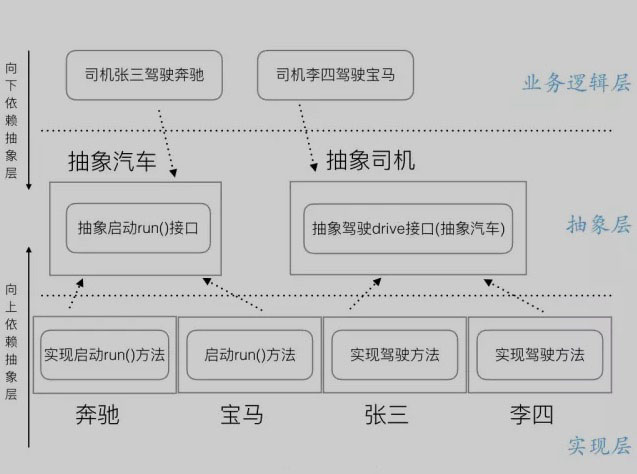 Let's take a look at the modified code: