ReentrantLock implements the Lock interface and is a reentrant exclusive lock.

ReentrantLock is more flexible and powerful than synchronized synchronous locks, such as implementing a fair lock mechanism.

First, let's look at what a fair lock mechanism is.

Fair locks tend to grant access to threads that wait the longest while multiple threads compete for locks.

That is, a fair lock is equivalent to having a thread waiting on a queue, and threads that enter the queue first get the lock, which is fair to each waiting thread according to the FIFO principle.

Unfair locks are preemptive, and threads do not care about other threads in the queue, nor do they follow the principle of first-come, first-come, and then try to acquire locks directly.

Let's move on to the topic and analyze how the underlying layer of ReentrantLock is implemented.

The underlying implementation of ReentrantLock

ReentrantLock implements on the premise that AbstractQueuedSynchronizer (abstract queue synchronizer), or AQS, is the core of java.util.concurrent. The common thread concurrency classes CountDownLatch, CyclicBarrier, Semaphore, ReentrantLock, and so on, all include an internal class inherited from the AQS Abstract class.

In addition to the state synchronization flag bits, a FIFO queue (also known as the CLH queue) is used inside AQS to represent a queued thread waiting for a lock, which is encapsulated as a Node node to join the CLH queue when a thread fails to contend for a lock.

The change process of Node node

Node nodes in the AQS synchronization queue change when lock competition occurs and locks are released, as shown in the following figure: 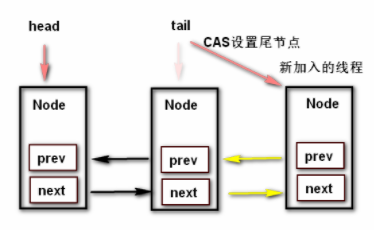 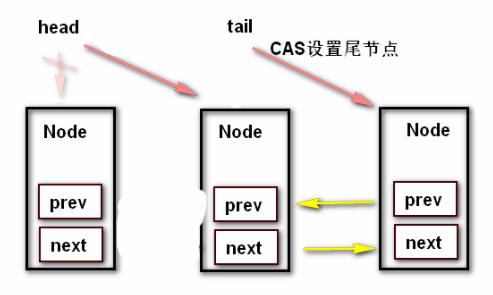 In addition to the predecessor and successor nodes, the Node class also includes SHARED and EXCLUSIVE nodes. What do they do? This necessitates an introduction to the two resource sharing modes of AQS.

Exclusive mode is the most commonly used mode and has a wide range of uses, such as locking and unlocking of ReentrantLock.

The core locking method in exclusive mode is acquire():

The tryAcquire() method is called first to try to acquire the lock, that is, to modify the state to 1 through CAS. If it is found that the lock is already occupied by the current thread, reentry is performed, that is, to give state+1;

After writing to the queue, you need to suspend the current thread as follows:

From the code above, you can see that a thread can hang when it is queued if its predecessor node is in SIGNAL state, which means that when a current node acquires a lock and leaves the queue, it needs to wake up the latter node.

Once you've finished locking, unlocking is simpler. The core method is release():

The tryRelease() method is implemented as follows, and the detailed process is described in the notes:

The biggest difference between shared and exclusive modes is that shared modes are propagated.

Shared mode acquires locks by acquiShared, which is one step more than exclusive mode, that is, when you get resources, you wake up your successor teammates.

Shared mode releases locks by releaseShared, which releases a specified amount of resources and wakes up other threads in the waiting queue to obtain resources if the wait thread is successfully released and allowed to wake up.

The main reference articles for this blog are as follows. Thank you very much: