Concurrentbag < T > does not provide as many external methods as list < T >, but it also has the extension method implemented by Enumerable. The methods provided by the class itself are as follows. 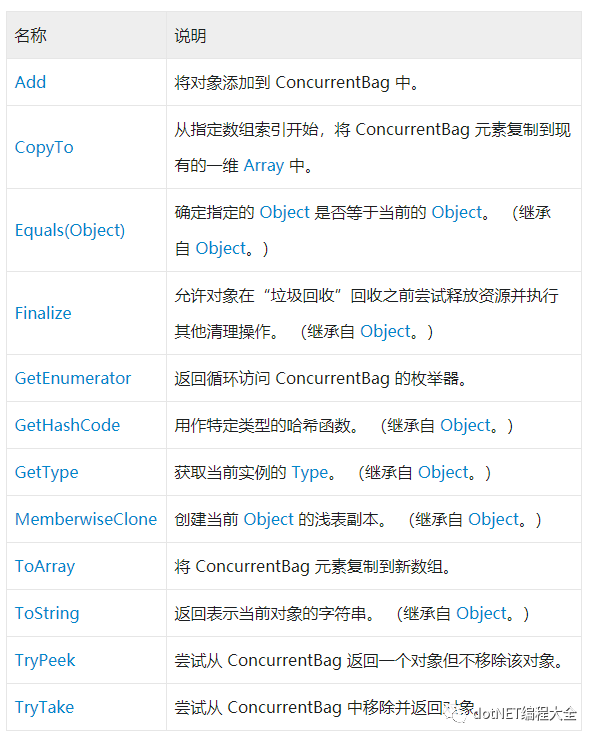 Let's first look at the private field declared by it. It should be noted that the data of the collection is stored in the local storage of ThreadLocal thread. In other words, each thread accessing it will maintain its own collection data list, and the data in a collection may be stored in the local storage space of different threads. Therefore, if a thread accesses its own locally stored objects, there is no problem. This is the first layer of thread safety, using threads to store data locally.

Then you can see ThreadLocalList m_headList, m_tailList; This is the head pointer and tail pointer of the local list object. Through these two pointers, we can access all local lists through traversal. It uses volatile decoration, so it is thread safe.

Finally, a flag is defined, which tells the operating thread that synchronization operation must be performed. This is to realize a fine-grained lock, because thread synchronization is required only when several conditions are met.

Next, let's take a look at the construction of the ThreadLocalList class, which is the location where the data is actually stored. In fact, it uses the structure of two-way linked list for data storage.

From the above code, we can further verify the previous view that when concurrentbag < T > stores data in a thread, it uses a two-way linked list, and ThreadLocalList implements a set of methods to add, delete, modify and query the linked list.

Next, let's take a look at how concurrentbag < T > adds new elements.

From the above code, we can clearly know how the Add() method runs. The key is the GetThreadList() method, which can obtain the data storage list object of the current thread. If there is no data storage list, it will be automatically created or through GetUnownedList() Method to find those threads that are stopped but still store a data list, and then return the data list to the current thread to prevent memory leakage.

In the process of data addition, the fine-grained lock synchronization lock is realized, so the performance will be very high. Deletion and other operations are similar to new ones, which will not be repeated in this paper.

4. How does concurrentbag implement iterator mode

After reading the above code, I am curious about how concurrentbag < T > implements ienumeror to realize iterative access. Because concurrentbag < T > stores data through ThreadLocalList scattered in different threads, the process of implementing iterator mode will be more complex.

After reviewing the source code later, it is found that concurrentbag < T > in order to realize the iterator mode, all the data divided in different threads are saved into a list < T > collection, and then the iterator of the copy is returned. Therefore, every time the iterator is accessed, it will create a new copy of list < T >. Although it wastes a certain amount of storage space, it is logically simpler.

So how does the FreezeBag() method freeze the entire collection? It is also divided into three steps.

After the above process is completed, the entire concurrentbag < T > collection is frozen. To unfreeze, it is similar. I won't repeat it here.

The following figure describes how concurrentbag < T > stores data. Thread local storage is realized through ThreadLocal in each thread. Each thread has such a structure and does not interfere with each other. Then, m_headList in each thread always points to the first list of concurrentbag < T > and m_tailList points to the last list. M_local is used between lists The m_nextList under s is connected to form a single linked list.

The data is stored in the m_locales of each thread, and a two-way linked list is formed through the Node class. PS: note that m_tailList and m_headList are not stored in ThreadLocal, but shared by all threads.