As shown in the figure, if the address is exposed, anyone who gets the address can directly send the request, but the front-end sending request must be realized through http. Therefore, the address will be exposed and interested people will get the address. Therefore, it is necessary to add a sign signature. The way to generate the signature is unknown to others, This will ensure that others can't use the address

The most important thing in the whole process is to implement encryption based on data packets. Therefore, the sign signature is not used as any field, but based on certain encryption rules. This encryption rule focuses on confidential data both on the client and the server

The sign signature should be time-effective. Otherwise, if someone intercepts a single request and sends the request to the server 100 times, there will be trouble. For example, if the user wanted to send a paid prop, he was intercepted and sent the request repeatedly, which will become asking the client to send 100 gifts, and the user's money will be gone.

There are two ways to achieve timeliness:

If you encounter a malicious request attack, you need to use a dynamic filter, which is another solution. It is not the same thing as the signature aging performance

To implement encryption, you need to generate a signature and complete the comparison before the request reaches the controller, so you need to set an interceptor

Write the interceptor under the common module

Then configure the interceptor in the spring configuration class

5.2 sort out the data intercepted by the interceptor

Now, if the front end requests the interface directly, it will be intercepted by the interceptor

The interceptor can identify the interface and specific method to be accessed by the request, and can also see whether there are annotations on this method and what annotations there are. Then we only need to customize an annotation and put it on the method to be encrypted. When the filter finds that the front-end request wants to access the method with this annotation, it will intercept it, so as to realize dynamic signature verification, Only important methods are verified

Customize an annotation in the public module, and set the life cycle, annotation type and a boolean variable

As shown in the figure, this annotation is placed on the method that needs to be encrypted to achieve the purpose of fixed-point interception

5.4 complete the preparation of filter

The code is shown in the figure

The effect is shown in the figure

As long as the encryption method is complex enough, it is difficult for others to obtain and crack it. There is no fixed saying

For example, we set an encryption method, first sort the attributes in the packet according to A-Z or Z-A, and then convert them into strings. Using TreeMap, we can realize A-Z or Z-A sorting

Then take out the ordered attributes one by one and spell them into a string, which is similar to the effect in the figure below. In the figure, C is an array, so there are multiple values, and the values are separated by commas

The code is as follows. After splicing the attributes, finally splice the token sent to the user by the server after the user logs in. In this way, when a signature mismatch is found, the token can be recorded and traced back to the user who sent false data. Then, the user can be sealed or the alarm can be sent to the network police for processing 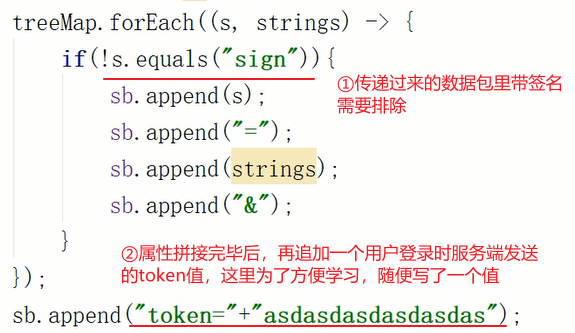 Finally, encrypt the string sb and compare it with the signature in the packet sent by the front end. If the comparison is correct, it will be released

The overall code is as follows