Now, if you search on the network, basically most controls used to detect FPS are implemented through CADisplayLink.

A timer object that allows your application to synchronize its drawing to the refresh rate of the display.

That is, the time object synchronized with the screen refresh rate.

The general practice of using CADisplayLink to realize FPS monitoring is as follows:

The core idea is: when initializing the CADisplayLink object, specify a method, which will be called every 1 / 60 second every screen refresh, and obtain the fps of the current screen by calculating the number of calls and time interval of the method

According to the above code, I created a tableView to display all kinds of fillet images in the cell. Anyway, how to get the card:

When running, you can see that the printed frame rate is:

However, when monitoring through the Core Animation of Instrument, the results are as follows: 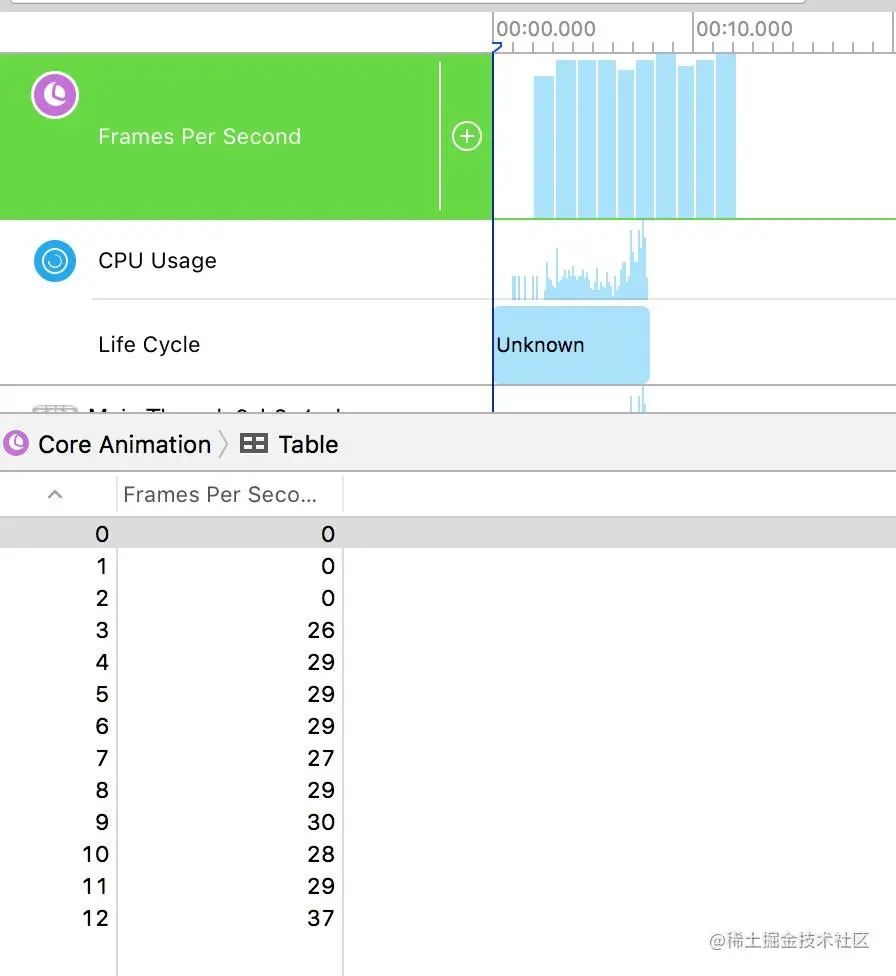 The two are not right at all.

In this article, it is found that the author also encountered the same problem: detailed explanation of FPS indicator based on CADisplayLink in iOS [1]

According to the introduction of the article "skills for iOS to keep the interface smooth" [2] by the great God ibirme, we can know that in the process of displaying images on the screen, the CPU is responsible for calculating the display content, doing work such as view creation, layout calculation and image decoding, and then submitting the data to the GPU, which transforms and renders these image data, The image will be submitted to the frame buffer, and then displayed on the screen when the next synchronization signal comes. Then the GPU switches to another frame buffer and repeats the above work.

It can be seen that the operation of CADisplayLink depends on RunLoop. The operation of RunLoop depends on its mode and the busy degree of CPU. When the CPU is busy calculating the display content or the GPU is too heavy, the displayed FPS will be inconsistent with the Instrument.

Therefore, using CADisplayLink can not accurately reflect the FPS of the current screen!

Because CADisplayLink can not accurately reflect it, the commonly used method is main process Caton monitoring. A sub thread is opened to monitor the RunLoop of the main thread. When the time consumption of the two status areas is greater than the set threshold, it is a Caton.

According to the introduction of how to monitor Caton [3], we can know the principle and practice of Caton monitoring in the main process.

[1] Detailed explanation of FPS indicator based on CADisplayLink in IOS: https://www.jianshu.com/p/86705c95c224

[3] How to monitor Caton: https://github.com/aozhimin/iOS-Monitor-Platform