To read this article, you need to have the following knowledge base

We know that the HashMap used in daily development is thread unsafe, and the thread safe HashTable class simply locks the method to achieve thread safety, which is inefficient. Therefore, we usually use ConcurrentHashMap in a thread safe environment, but why do we need to learn ConcurrentHashMap? Is it over? I think learning its source code has two advantages:

I ask the following questions:

Next, let's continue with the questions and enjoy the wonderful concurrent art works of the concurrent master (the following discussion is based on JDK1.8)

Assuming that F is the part that must be executed serially, N represents the number of processors and Speedup represents the acceleration ratio, which can be simply understood as CPU utilization 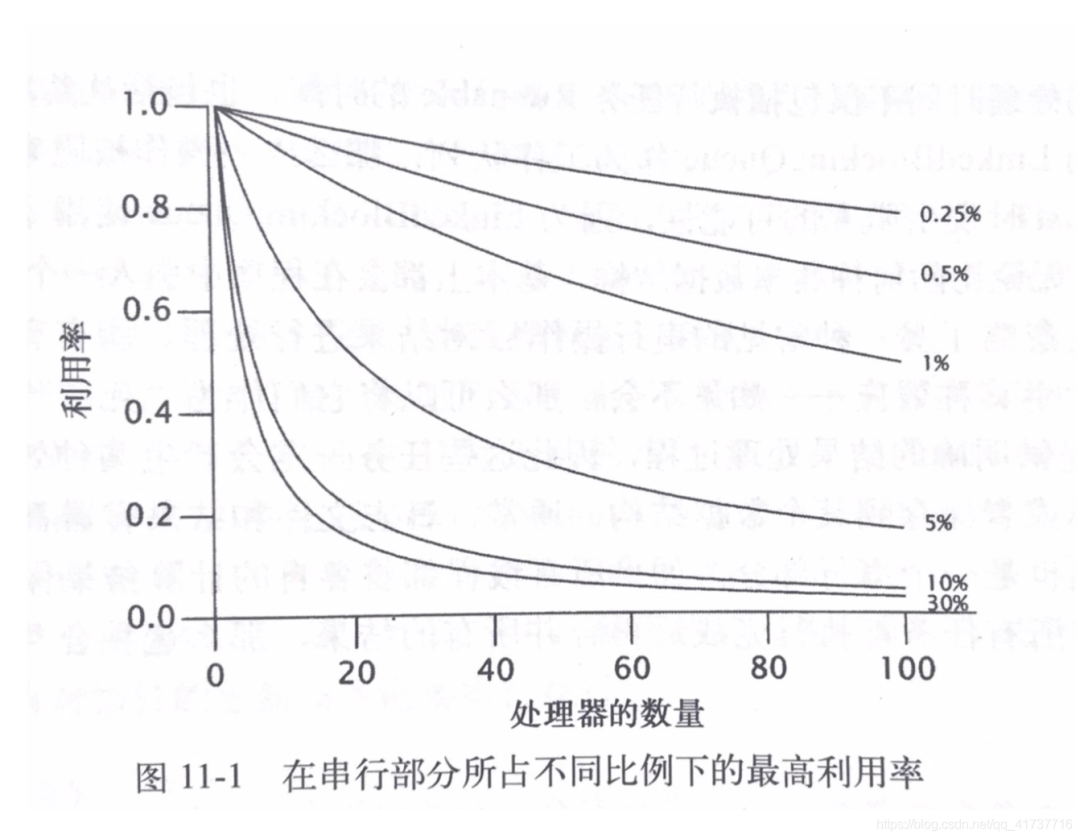 From this, we can see that the scalability in the program (the ratio of increasing the concurrent performance by increasing the external resources) is affected by the serial execution part of the program, and the common serial execution includes lock competition (context switching consumption, waiting, serial) and so on, which gives us an inspiration. We can optimize the concurrent performance by reducing lock competition, Concurrent HashMap uses lock segmentation (reducing lock range), CAS (optimistic lock, reducing context switching overhead, no blocking) and other technologies. Let's take a specific look

The underlying data structure of HashMap is briefly described here, and will not be described too much:

A node object array is roughly used to store data. In case of Hash conflict, a node linked list will be formed. When the length of the linked list exceeds 8 and the node array exceeds 64, the linked list structure will be converted into a red black tree. Node objects:

It is worth noting that the value and next pointers use volatile to ensure their visibility.

In JDK1.8, when initializing ConcurrentHashMap, the Node [] array has not been initialized. It will not be initialized until the first put method call:

At this time, there will be concurrency problems. What if multiple threads call initTable to initialize the Node array at the same time? See how the master handled it:

The table variable uses volatile to ensure that the latest written value is obtained every time:

Even if multiple threads perform put operation at the same time, optimistic lock CAS operation is used when initializing the array to determine which thread is qualified for initialization, and other threads can only wait.

Look directly at the code:

It is worth noting that the tabAt(tab, i) method uses the operation of Unsafe class volatile to view the value in a volatile manner to ensure that the value obtained each time is the latest:

Although volatile is added to the above table variable, it can only ensure the visibility of its reference, not whether the objects in its array are up-to-date. Therefore, Unsafe class needs to get the latest Node in a volatile manner. 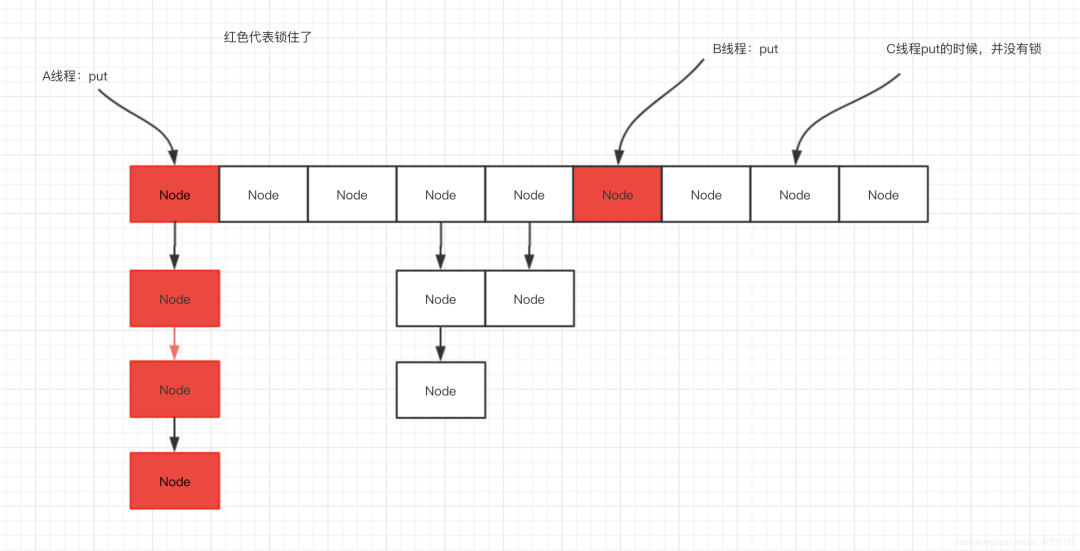 Because it reduces the granularity of the lock, if the hash is perfect and does not conflict, it can support n threads to put at the same time, and n is the size of the Node array. Under the default size of 16, it can support a maximum of 16 threads to operate at the same time without competition and thread safety. When the hash conflict is serious, the Node linked list becomes longer and longer, which will lead to serious lock competition. At this time, the capacity will be expanded and the nodes will be hashed. The thread safety of capacity expansion will be introduced below. Summarize the concurrency techniques used:

Let's take a look at the expansion code implementation:

Here's why there are ln (low order Node) and hn (high order Node) during migration. First, let's talk about a phenomenon:

We know that when the put value is, the hash value will be calculated first, and then hashed into the subscript of the specified Node array:

Where n is the length of the Node array, which is assumed to be 16.

Suppose a key comes in and its hash after hash=9, what is its subscript value?

Assuming that the Node array needs to be expanded, we know that the expansion is to double the length of the array, that is, 32, so what is the subscript value?

At this point, we change the hash after hashing to 20, so what will happen?

Back in the code:

This operation consists of two linked list structures, high and low, as shown in the following figure: 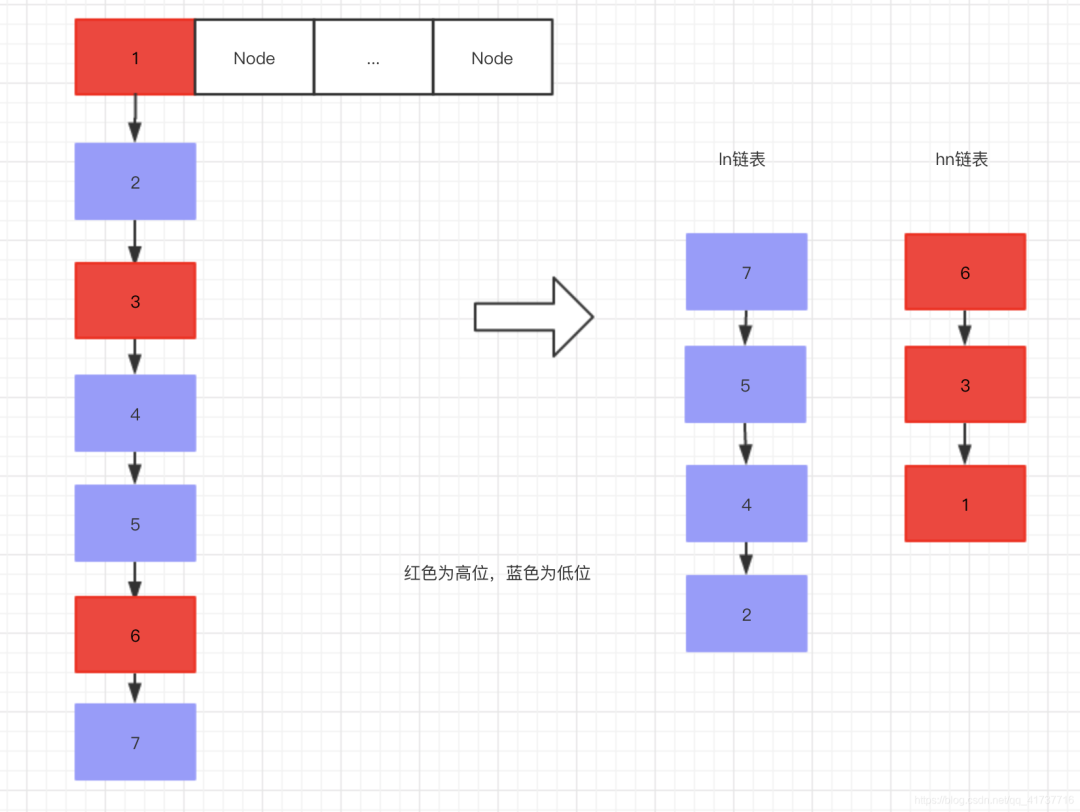 Then put its CAS operation into the new Node array:

Among them, the low-order linked list is placed at the original subscript, while the high-order linked list needs to add the length of the original Node array. Why not repeat it? It has been illustrated above, so as to ensure that the high-order nodes can still be hashed to the array corresponding to the subscript using the hash algorithm when migrating to the new Node array.

Finally, set the corresponding subscript Node object in the original Node array as fwd marked Node, indicating that the Node migration is completed. Here, the migration of one Node is completed, and the next Node will be migrated, that is, the Node with i-1=14 subscript.

get operation during capacity expansion:

Focus on the two lines with comments. In the source code of the get operation, you will judge whether the hash in the Node is less than 0 and whether you remember our placeholder Node. Its hash is MOVED and the constant value is - 1. Therefore, it is judged that the thread is migrating and entrusted to the fwd placeholder Node to find the value:

It should be clear here that the reason why the placeholder Node needs to save the reference of the new Node array is also because of this. It can support the search for values without blocking during the migration process. It can be described as a wonderful design.

During the put operation, suppose that the migration is in progress, and a thread comes in and wants to put the value to the migrated Node. What should I do?

This method involves a large number of complex bit operations, which will not be repeated here, but just a few words. At this time, the sizeCtl variable is used to indicate that HashMap is expanding. When it is ready to expand, sizeCtl will be set to a negative number (for example, when the array length is 16), and its binary representation is:

The unsigned bit is 1, indicating a negative number. Among them, the upper 16 bits represent the one bit algorithm mark of the array length (a bit like the function of epoch, indicating that the current migration Dynasty is the array length X). The lower 16 bits indicate that several threads are migrating. At first, it is 2, and then it is increased by 1. After the thread migration, it will be reduced by 1. That is, if the lower 16 bits are 2, it means that a thread is migrating. If it is 3, Represents that 2 threads are migrating, and so on

As long as the array length is long enough, it can accommodate enough threads to expand together, maximize parallel tasks and improve performance.

Under what circumstances will capacity expansion be performed?

treeifyBin method will convert the linked list into a red black tree to increase the search efficiency, but before that, it will check the array length. If it is less than 64, it will give priority to the expansion operation:

After each new Node is added, the addCount method will be called to detect whether the size of the Node array reaches the threshold:

ConcurrentHashMap uses various CAS operations to maximize the concurrency performance of capacity expansion operations. In the process of capacity expansion, even if a thread calls the get query method, it can safely query data. If a thread performs put operation, it will also assist in capacity expansion. It uses sizeCtl flag bits and various volatile variables to carry out CAS operations to achieve communication and assistance between multiple threads, Only one Node is locked during migration, which not only ensures thread safety, but also improves concurrency performance.

Imagine, if it were you, how would you design such hot data? Lock or CAS operation? Enter ConcurrentHashMap to see how the master skillfully uses concurrency skills to improve the concurrency performance of hot data.

Let's first look at the general implementation idea in the form of diagram:

This is a rough implementation. In the design, the idea of divide and conquer is used to disperse each count into each countCell object (hereinafter referred to as bucket), so as to minimize the competition. CAS operation is also used. Even if there is competition, other processing can be carried out on the failed thread. The difference between the implementation of optimistic lock and pessimistic lock is that optimistic lock can handle threads that fail to compete with other strategies, while pessimistic lock can only wait for the lock to be released. Therefore, CAS operation is used to deal with threads that fail to compete, and CAS optimistic lock is skillfully used.

Let's take a look at the specific code implementation:

Assume that the current thread is the first put thread

The if judgment here must follow the second judgment. First, increase the value of the variable baseCount:

What's the use of this value? Let's take a look at the method sumCount for counting container size:

The general idea of this method is similar to the figure at the beginning. The size of the container is actually divided into two parts. At the beginning, only the part of the counting bucket is mentioned. In fact, there is also a baseCount. In other words, when increasing the capacity, CAS increments the baseCount first.

It can be seen that there are two ways to count the container size:

CAS failed due to thread contention

Suppose that the counting bucket is used for counting at this time:

Seeing this, I think we can solve the above two problems:

Under what conditions will the counting bucket be expanded?

Personally, thread safety and capacity expansion of container size can be regarded as the two smartest concurrent designs in concurrent HashMap. I can't help clapping my hands when reading this source code. I think this may also be a fun to see the source code. Stand on the shoulders of giants and watch the thoughts of giants.

|Thread safety of get operation

For get operation, there is no thread safety problem, only visibility problem. Just ensure that the data of get is visible between threads:

In addition to adding the judgment of migration, the get operation is basically the same as the get operation of HashMap, which will not be repeated here. It is worth mentioning that the tabAt method Unsafe class volatile is used to obtain the nodes in the Node array to ensure that the obtained nodes are up-to-date.

|Different implementations of JDK1.7 and 1.8

The implementation of 1.7 also adopts the segmented lock technology, but multiple segments correspond to a small HashMap. The segment inherits ReentrantLock and acts as a lock. One lock locks a small HashMap (equivalent to multiple nodes). From the implementation of 1.8, the granularity of the lock is reduced from multiple Node levels to one Node level, Reduce lock contention again and reduce the part of program synchronization.

I have to say that the master uses CAS operations incisively and vividly. I believe readers who understand the above source code can also learn the concurrency skills used by the master, not only in ConcurrentHashMap, but also in most of the source code of JUC. Many concurrency ideas are worth reading and learning.