Handwritten HashMap? So hard, the interview has been rolled to this extent?

The first time I saw this interview question was in the article of an Offer harvester boss who was inconvenient to be named:

This... I was numb at that time. We all know that the data structure of HashMap is array + linked list + Red and black tree. Is this the rhythm of tearing the red and black tree by hand?

Later, after sorting out some Facebook, it was found that Kwai Kwai appeared frequently in the quick interview. The analysis of this question should be in the quick question database. Since it happens frequently, you can't tear the red and black tree by hand - I think most interviewers can't tear it out. If they don't tear the red and black tree, this question is still a little saved. Look down slowly.

HashMap is actually the implementation of hash table in data structure in Java.

Hash table is a data structure that can be accessed directly according to the value of key.

It's like someone looking for a third in the company. The little sister at the front desk is good at pointing to the station in the corner.

In short, a hash table consists of two elements: a bucket array and a hash function.

If several programmers are assigned stations: egg, Xiong Da, Niu Er and Zhang San, we observe that these names are more distinctive. The last word is a number. We can extract it as the key code. In this way, they can be assigned to the corresponding numbered station. If they are not assigned, let it be empty first. 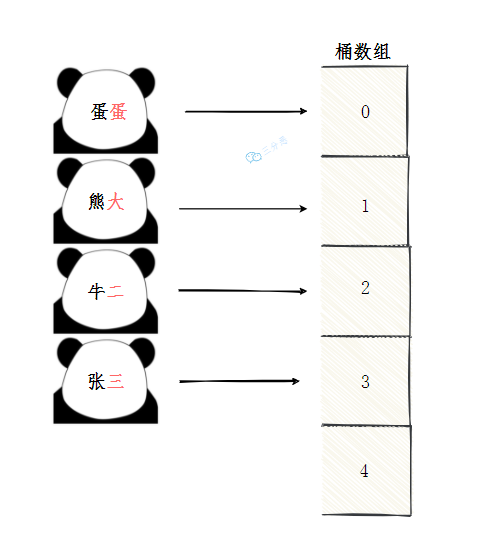 So what is the time complexity of finding / inserting / deleting in this case? Obviously, they are all O(1).

But we are not gourd babies. We can't all call them 1234567. If the newcomer is Nangong Daniu, how can we assign him?

For example, we have a bunch of irregular names Zhuge iron and steel, Liu Huaqiang, Wang situ and Zhang quandan... We need to calculate which station these names should be assigned to through the hash function. 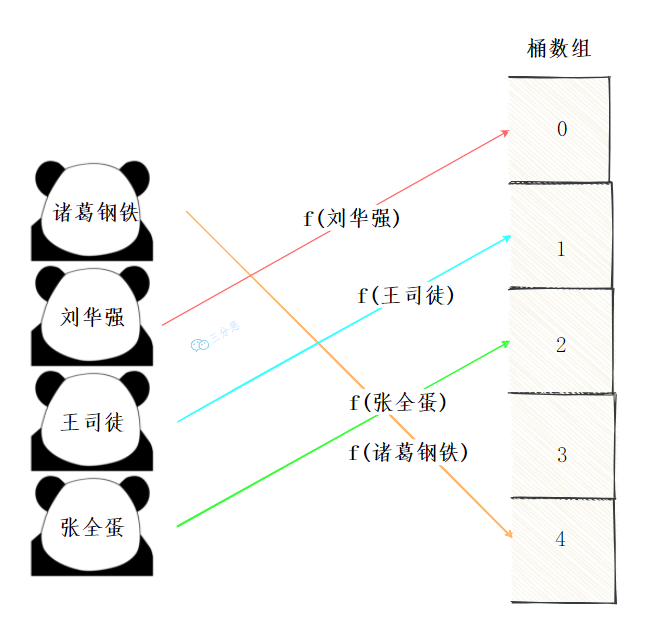 Hash function is also called hash function. If the key of our data element is an integer or can be converted to an integer, we can obtain the mapping address through these common methods.

In Java, the Object class provides a default hashCode() method, which returns a 32-bit int integer, which is actually the storage address of the Object in memory.

However, this integer must be processed. Among the above methods, the direct addressing method can be excluded, because we can't build such a large bucket array.

And the hash address we finally calculated should be within the length of the bucket array as far as possible, so we choose the division and retention method.

Ideally, each data element is calculated by the hash function and falls in the position of its unique bucket array.

However, the reality is usually unsatisfactory. Our space is limited, and the best hash function can not completely avoid hash conflict. The so-called hash conflict is that different key s fall to the same subscript after being calculated by the hash function.

It is also called zipper method. It looks like pulling another linked list on the bucket array. Put the elements with hash conflict into a linked list. When looking up, traverse the linked list from front to back and find the corresponding key. 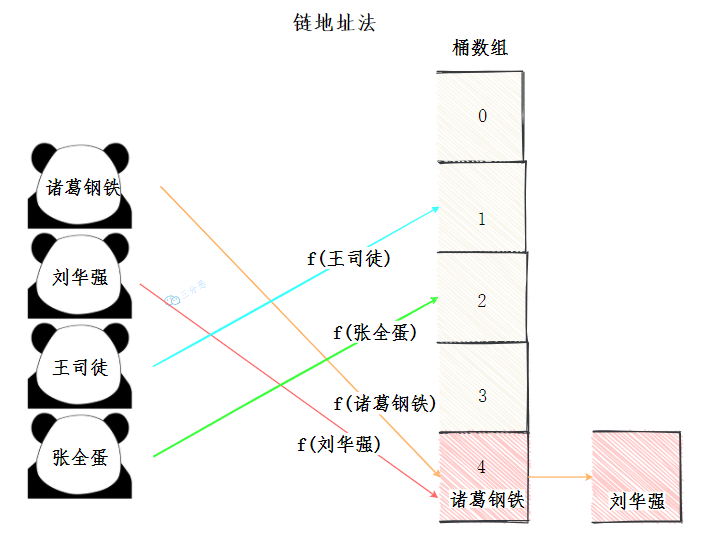 The open address method is simply to find a free position in the bucket array for the conflicting elements.

There are many ways to find free locations: 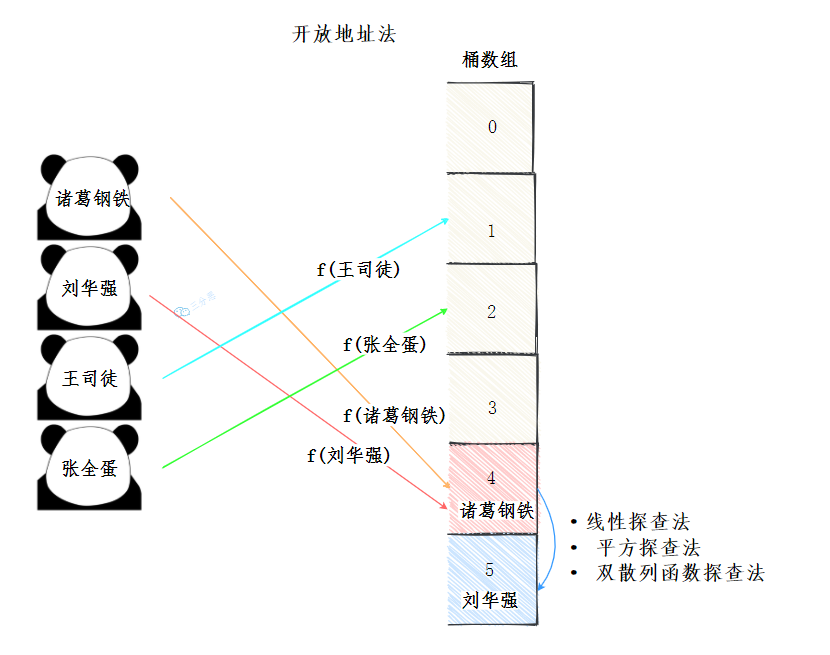 Obviously, next we will use the chain address method to solve the conflict.

Well, that's all for the introduction of hash table. I believe you have a deep understanding of the essence of hash table. Next, enter the coding time.

The simple HashMap we implemented is named ThirdHashMap. First determine the overall design:

The overall structure is as follows:

We need to define a node as the carrier of specific data. It not only carries key value pairs, but also serves as the node of the single linked list:

There are mainly four member variables, in which the bucket array is used as the structure for loading data elements:

Hash function is the hashCode() and array length remainder we mentioned earlier.

I use a putval method to complete the actual logic, because this method will also be used in capacity expansion.

The get method is relatively simple. I get the address through the hash function. Here, I omit the judgment of whether there is a linked list and directly look up the linked list.

The test code is as follows:

You can run by yourself and see the results.

Well, here we have a simple HashMap to achieve, and the interview Kwai is no longer afraid of handwritten HashMap.

Kwai: Interviewer: really? I don't believe it. I want you to write a red and black tree version

Of course, we also find that the O(1) time complexity operation of HashMap is in the case of less conflicts, and the simple hash remainder is certainly not the optimal hash function; After the conflict, the linked list is pulled too long, which also affects the performance; In fact, there are thread safety problems in our capacity expansion and put

However, in reality, we don't have to consider so much, because Master Li has written it for us, and we just call it.