Key points of this chapter:

Before looking at this one, you'd better familiarize yourself with glTF file format:
https://www.khronos.org/files/gltf20-reference-guide.pdf.

It will be used here cgltf (https://github.com/jkuhlmann/cgltf) )To parse glTF files, some files may be bad. At this time, you need to refer to the glTF reference viewer at https://gltfviewer.donmccurdy.com , it seems that you can test the quality of the document by dragging it in directly.

glTF was designed and specified by the Khronos Group, for the efficient transfer of 3D content over networks.

glTF file is a file that stores 3D data. It is very efficient in network transmission. It is often used in AR, Internet transmission and other fields. However, it is not as widely used as Fbx file in games and Maya.

glTF can be represented by a JSON file, which can be roughly divided into the following contents:

The relationship between each part is shown in the figure below: 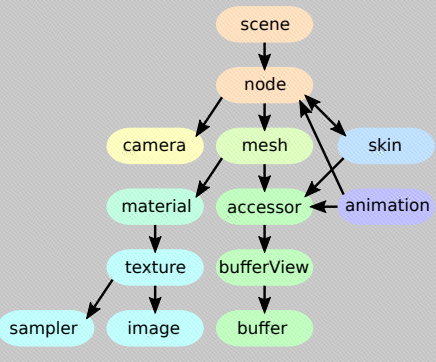 File path to glTF index
The glTF file does not contain all the resources in it. You can store URIs to represent paths, as shown below:


Exploring how glTF files are stored

The glTF files provided in this book are the second file (glTF embedded format) in the figure, which is the text file of JOSN, but the glTF files of other two formats will be supported later.


glTF files store a scene, not a model

This is the same as fbx. In addition to models, glTF files can also store Cameras and PBR materials. Here are the contents for animation contained in glTF files - different types of mesh data:

The root of a glTF file is the scene. A glTF file can contain one or more scenes. A scene contains one or more nodes. A node
can have a skin, a mesh, an animation, a camera, a light, or blend weights attached to it. Meshes, skins, and animations each store large chunks of information in buffers. To access a buffer, they contain an accessor that contains a buffer view, which in turn contains the buffer

The root of glTF file is scene. A glTF file can have one or more scenes. Each scene contains at least one node. A node can store references to mesh, camera, light, skin and other data. These data exist in buffers. They all have an accessor. This accessor contains a buffer view, and this buffer view contains the corresponding buffer(?)

You can see the following figure to help understand: 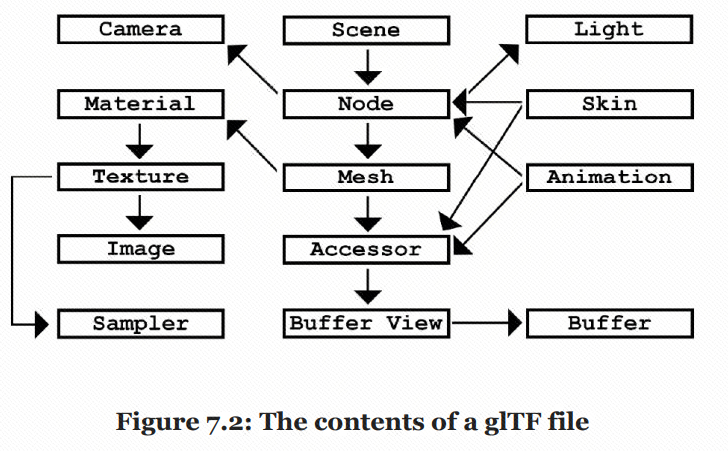 The parts you need for animation

The following figure is the relationship diagram of animation related parts in a simple version of glTF:

The example code is as follows:

If you read the glTF file from the beginning, you need to start with JSON parser. There is no need to write such a low-level one here, so cgltf is integrated. All the libraries here are implemented in the header file, so only github.com/jkuhlmann/cgltf/blob/master/cgltf.h Download the header file and add it to the project.

Then add a cgltf.c file to ensure that the header file is compiled, as follows:

Create the Loader function responsible for reading. Here, two global functions are created without creating classes. The header file is as follows:

Then create the corresponding cpp file:

Since only glTF files can be read here, a method is introduced here to convert. fbx and. blend files into glTF files using Blender

Open Blender. If the file is a. blend file, open it directly. If it is a. DAE or. FBX file, you need to import it into Blender again. Open Blender, delete the default Cube in Blender, and select File - > import. After opening the file, select File - > export to export the glTF2.0 file. You can select multiple formats, as shown in the following figure: 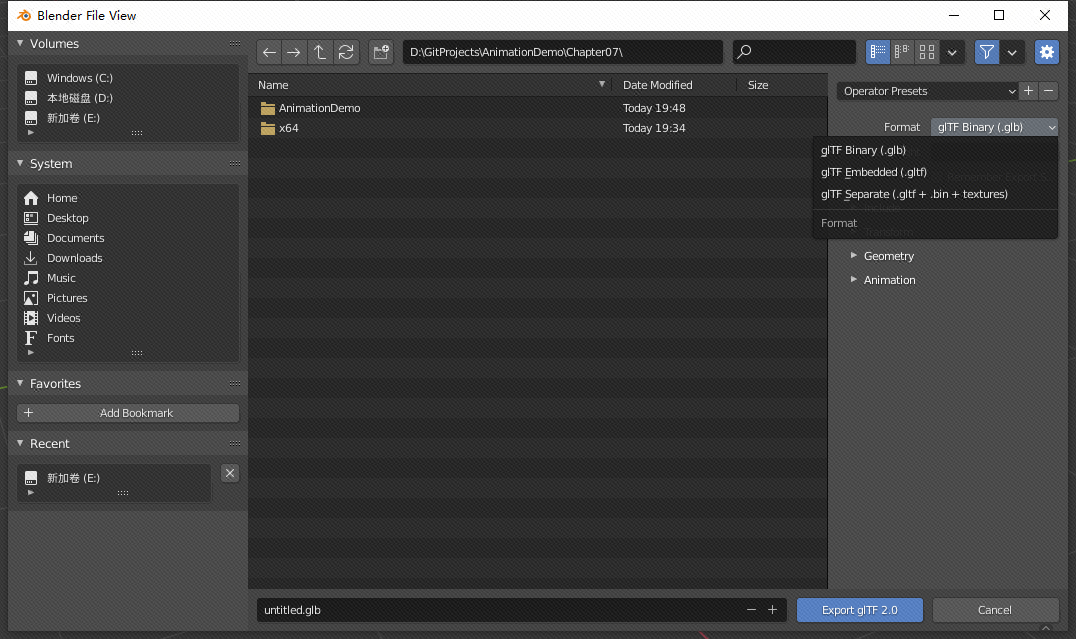 The old version of animation is to store the data of all characters' joints at the key frame, but this is a waste of memory. At this stage, animation is much more scientific. It uses Curve to save animation data, as shown in the following figure:

Key points of this chapter:

A B é zier spline has four points, two points are used for interpolation, and the two points are control points to help generate curves. As shown in the figure below, it is a cubic Bezier spline: 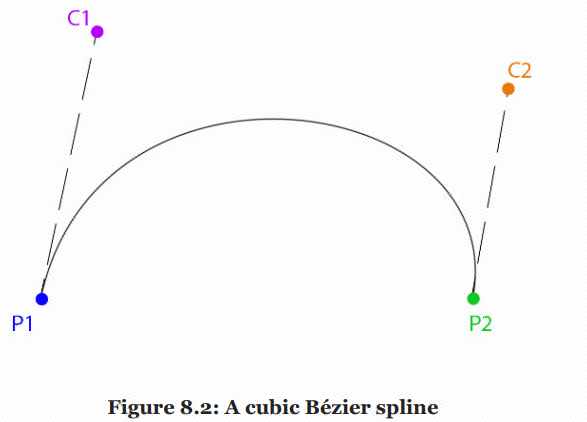 We can study how this curve is generated. To interpolate the value from P1 to P2, we can connect it according to the two control points C1 and C2: 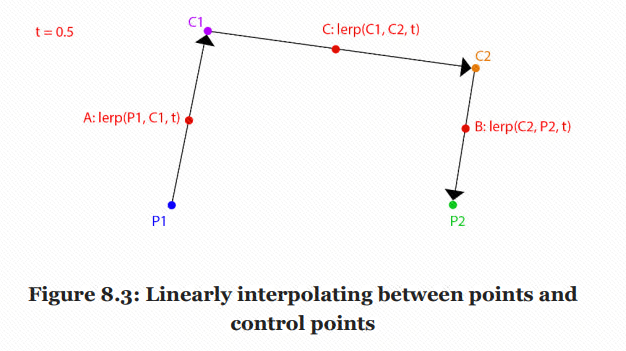 Among them, A, B and C are the midpoint of the three line segments. You can continue to take the midpoint in the same way to get: 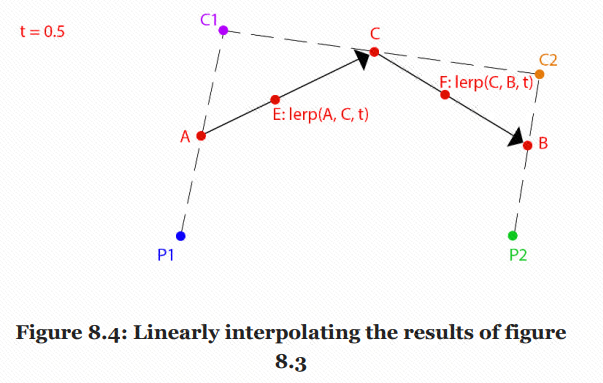 Do the same again, or take the midpoint of part 0.5, as shown in the figure below. The final R point is a point on Bezier spline:

Relevant codes are as follows:

The following describes the method of drawing Bezier curve. In fact, the above function is used to obtain many points according to different proportions t, and then connect these points to approximate the Bezier curve. The code is as follows:

It can be seen from the above example that the final Bezier interpolation function can be completed through cubic linear interpolation. However, the above function also calls Lerp function, which is not an optimized code writing method. Here, the author mathematically optimizes it and obtains the new function as follows:

This is actually the decomposition form of Bezier interpolation, which turns it into the sum of four cubic functions of t, as shown in the following figure:

Since t here is a cubic function, the Bessel spline here belongs to cubic spline

The most common spline type used in animation for games is a cubic Hermite spline.

Unlike Bézier, a Hermite spline doesn't use points in space for its control; rather, it uses the
tangents of points along the spline. You still have four values, as with a Bézier spline, but they are interpreted differently. With the Hermite spline, you don't have two points and two control points; instead, you have two points and two slopes. The slopes are also referred to as tangents—throughout the rest of this chapter, the slope and tangent terms will be used interchangeably

Its function is expressed as follows:

The corresponding code is:

The essence of animation is a pile of curves with Property over time. hermite Soline and Bezier Spline mentioned here are the two most common curves

There are three types:

The three types are shown in the following figure. Note that the Constant Curve here is not always a Constant Curve. It feels more and more advanced from left to right:

Here, we should consider the specific data of each frame of an animation. Assuming that the animation is only the application of a Property Curve, for Linear and Constant curves, the data of each frame is actually a value and the corresponding time.

For a Curve of Cubic type, its frame data is more complex. In addition to its own value and corresponding time, it also needs to store the tangent there. There are two tangents here, one is the incoming tangent and the other is the outgoing tangent. The former is used to evaluate the time point in front of the control point, and the latter is used to evaluate the time point behind the control point.


The Curve data of a Property is a collection of multiple key frame data. The data of each key frame includes time, incoming and outgoing tangent and the value of the corresponding Property. Specifically, there can be two representation methods:

The second method can write code better than the first method, but the first method saves memory because each property can be resolved into scalar curves (such as float curves). Animation Tracks are stored in the. glTF file in this way, while the second method, such as a Vector3, may only have x and y changes in the animation, But the second is to store it as a whole, so curve will also contain z data, which will consume more memory.

Next, you can implement the Frame class, which is a template class. The code is as follows:

A Track class is a collection of frames. Interpolating a track returns the data type of the track;

The specific cpp code is as follows:

What exactly is the Track class? Does the Curve data corresponding to the Property seem to be not, because it seems to be used for time. For example, this Code:

Analyze the characteristics of Track:

Therefore, the Track I understand is very similar to the Curve data in Unity. It is essentially a Curve whose Property changes over time.

Let's take a look at the previous code:

In fact, this Track is also a Curve. Its variable is time. The result is related to time and the cycle of the animation itself. Its Curve is shown in the following figure: 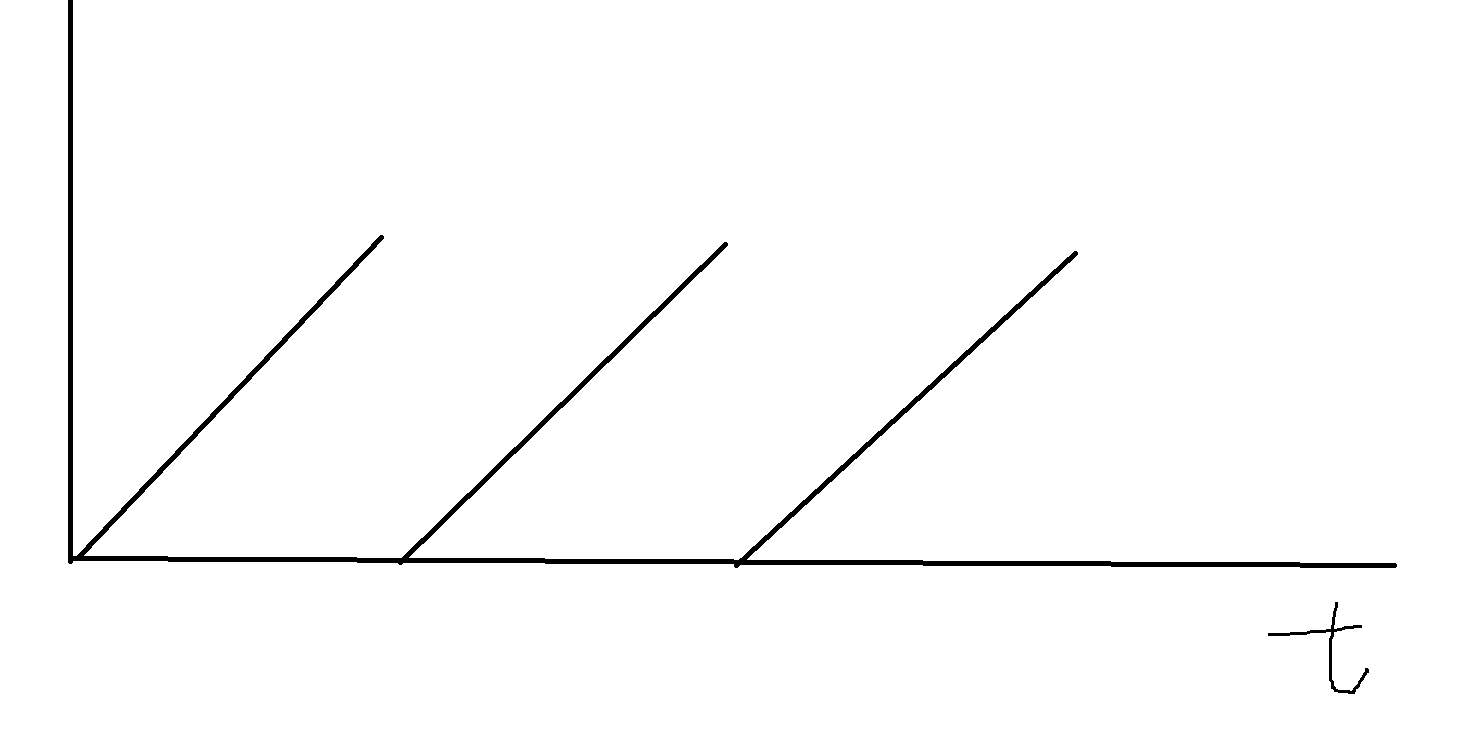 In fact, it is similar to the data in Animation in Unity. There are also curves of LocalPosition, LocalRotation and LocalScale. However, the Animation in this book seems to have no Animation data of Scale, so only the first two are combined.

There are two approaches:

The following is the implementation of these functions. They are basically the stitching of three tracks. There is nothing new:


Summary of this chapter

This chapter has learned the essence of animation. The essence of animation is a pile of tracks, or a pile of Curves of a Property. Track s are composed of multiple key frame data of a Property. The following AnimationClips are basically the collection of TransformTrack objects established in this chapter. Sample00 on Github brings the code of this lesson, and Sample01 draws some tracks, because previewing the Curves of these tracks is also very helpful for debugging.

Differences between fbx and glTF files

I haven't finished it. I'll study it later

Spline
Spline Curve is a mathematical expression method used to represent complex curves and surfaces. What I understand is that this thing is similar to
A spline curve is a mathematical representation for which it is easy to build an interface that will allow a user to design and control the shape of complex curves and surfaces.

Attention reader! Don't stop learning now. Get hold of all the important CS Theory concepts for SDE interviews with the CS Theory Course at a student-friendly price and become industry ready.