The I2C (Inter-Integrated Circuit) bus is composed of Philips The company has developed a simple, two-way two-wire synchronous serial bus, which can transmit information between devices connected to the bus by only two wires. I2C bus is divided into host and slave devices. Host is used to start bus to transfer data and generate clock to synchronize slave. Any addressed device is considered slave device at this time.

The I2C bus specification has now evolved to version 2.0, with bus rates up to 3.4 Mbits/s. Usually there are three working modes: standard mode (up to 100kbits/s), fast mode (up to 400kbits/s), high speed mode (up to 3.4Mbits/s), ultra-fast mode (5Mbits/s). Common devices support both standard and fast mode.

The I2C bus has only two communication lines, SDA (Serial Data Line) and SCL (Serial Clock Line), which are two-way I/O lines. In order to open the leakage output of the interface circuit, the power supply VCC needs to be connected by pull-up resistance. When the bus is idle, both lines are high-level, the same devices connected to the bus are CMOS devices, and the output level is also open-leak circuit. Relationships.

MOS devices use OD (Open Drain) open-drain mode, TTL devices use OC (Open Colletor) collector open-circuit mode. When the device outputs "0", the bus and ground are connected, and when the output "1" is disconnected, so the bus must use external pull-up resistance to pull the bus up to the power supply. Since all devices use OD or OC, output "1" In fact, it does not affect the bus, but because there is pull-up resistance outside, the bus bus line comes out at a high level. When output "0", the device connects to the MOS tube directly when the bus is grounded, the bus is forced to pull to the ground, and the bus becomes low level.

A typical I2C bus application example is shown in the following figure:

The I2C Bus supports multiple hosts and slaves, and the devices connected on the bus are limited by the bus load of 400pF. With so many devices connected to the bus, each device must have a unique address in order to distinguish the devices. This address is usually 7 digits or 10 digits. A 10 digit address is also called an extended address.

In general, the communication process starts with the start signal and the data transfer is completed to end with the end signal. However, in some cases, after transferring part of the data, another communication (typically a write-to-read process) is required to send a restart signal.

The minimum time required for the host to send start, end and answer signals is as follows: 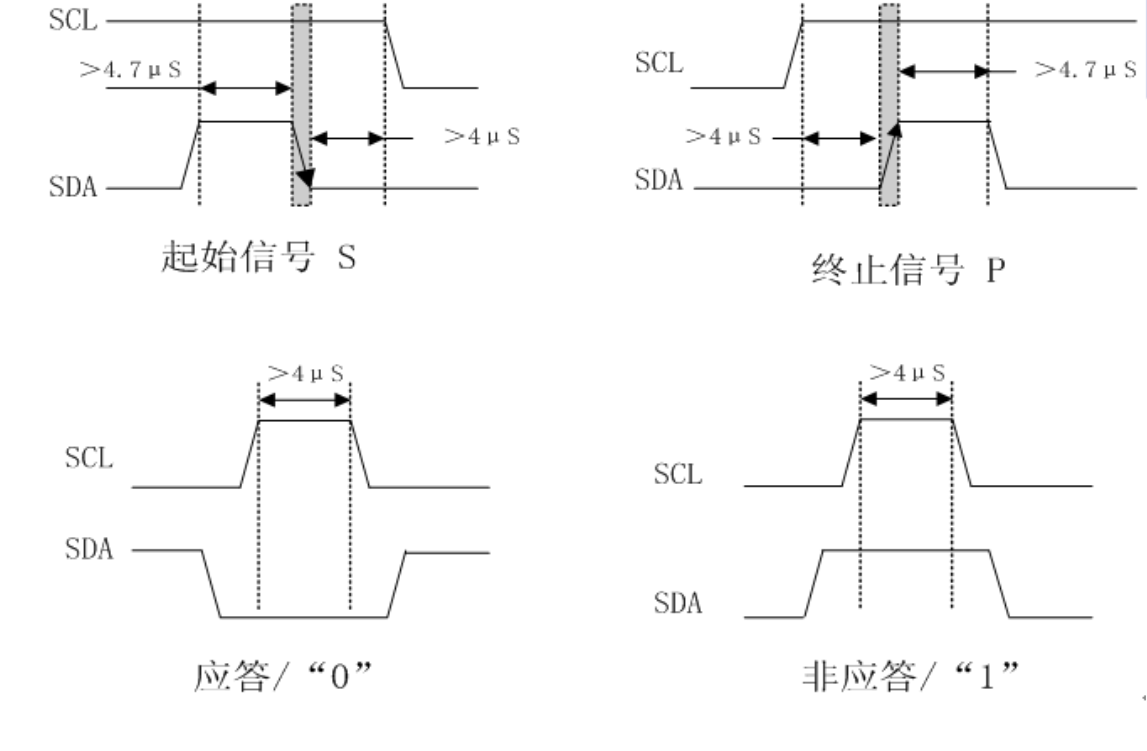 The MCU, as the master device, sends two bytes of data to the slave device. It first sends a start signal (S), then a seven-bit address (MSB high first), then a "0" (write on behalf of), and then a slave confirmation (ACK), followed by a first byte of data (both SCL and S DA signals), and then a second data after slave confirmation. Send a termination signal to end this communication.

The MCU, as the master device, reads two bytes of data from the slave device, first sends a start signal (S), then sends a 7-bit address (MSB high-bit first), then sends a "1" (representative read), and then receives the first byte of data (SCL signal only, data returned from SDA) after the slave confirmation (ACK), and after receiving 8-bit data, the host sends (ACK); Start receiving the second data, after receiving 8-bit data (if not the first byte, the host sends ACK; if it is the last byte, the host sends NACK), and then send a termination signal to end this communication.

Once you understand these basic concepts, general I2C bus-related programming will be fine. In order not to interfere with beginners, the following concepts are not explained here. Those who want to know more can look for relevant data on their own.