Through the development of the past decade, ordinary people have become more and more easy to enter the stock market, and the amount of funds entering and leaving the market every day has reached a record high.

As an investor, you can cultivate experience and intuition about when to buy or sell in many ways. One of the easiest ways is to consult friends or other investors, but they will soon drown you with conflicting views.

This article will try to solve the gold problem of making money with rigorous mathematical tools rather than rigid opinions - when should I buy or sell?

I will demonstrate how to use the Gaussian mixture model to help determine when funds enter or exit the market.

Mathematically speaking, the market situation at any given time can be called "market state". Market can usually be interpreted as any number of concepts, such as bear market or bull market; Fluctuation size, etc. We can cluster the states of trading days according to some characteristics, which is much better than naming each concept separately.

Since the market situation is not clearly defined - and therefore there is no response variable representing the market - it may be much better to use unsupervised machine learning model to confirm the market state than supervised model, which is also the theoretical hypothesis of this article.

Gaussian mixture model is the overlap of multiple normal distributions in p-dimensional space. The dimension of a space is generated by the number of variables. For example, if we have a variable (S & P 500 return), GMM will fit based on one-dimensional data. GMM can be used to simulate the state of the stock market and other financial applications. A characteristic of stock market returns is the heavy tail produced by high volatility days. The ability to capture highly fluctuating days at the tail of the distribution is very important to capture information in the modeling process.

The figure above represents some multimodal data with four clusters. Gaussian mixture model is a clustering model for labeled data.

One of the main benefits of unsupervised clustering using GMM is that the space containing each cluster can present an elliptical shape. Gaussian mixture model considers not only mean but also covariance to form clusters

One advantage of GMM method is that it is completely data-driven. The data provided to the model can be clustered. Importantly, the label of each cluster can be digital, because the data drives the potential characteristics rather than human opinions.

Step 2: execute step E (Expectation) to calculate the expectation of sample hidden variables according to the current parameter value;

Step 3: execute step M (Maximum) to solve the maximum likelihood estimation of parameters according to the hidden variables of the current sample;

The index i represents each data point or vector. Index C represents a given cluster; If we have three clusters (c), it will be 1 or 2 or 3.

The above is the multivariable Gaussian formula, where mu and sigma are the parameters that need to be estimated by EM algorithm.

Another key concept is that each Gaussian distribution in our space is unbounded and overlaps each other. According to the location of data points, a probability is assigned to them from each distribution. The sum of the probabilities of each data point belonging to any cluster is 1.

Finally, since the EM algorithm is an iterative process, we need to measure the progress of each step to know when to stop. Therefore, we use the log likelihood function of the model to measure when the parameters converge.

This section will be divided into two sections, each representing an application of GMM.

Use GMM to divide the return of S & P500 into three states. Data from Yahoo Finance.

Here I need to determine how many states best represent the market environment. We will assume three states - bear market, shock market and bull market.

I will use the logarithmic return of S & P500 to fit the GMM.

The Python implementation of GMM on one-dimensional data is very simple.

Using sklearn's Gaussian mixture model, we can find the state we want. 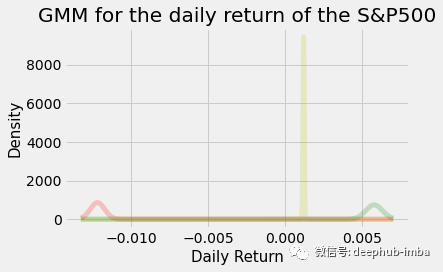 From the above analysis, the two states may also be OK 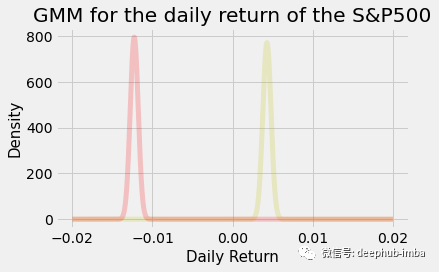 One possible problem is convergence. It may be based on the initial conditions and the definition of a threshold in the EM algorithm, or it may form different distributions. This needs further investigation.

The US economy is classified using GMM compliant macroeconomic data

This figure shows a major advantage of GMM over other clustering algorithms. Normal distribution can produce elliptical shape, which comes from the covariance matrix. 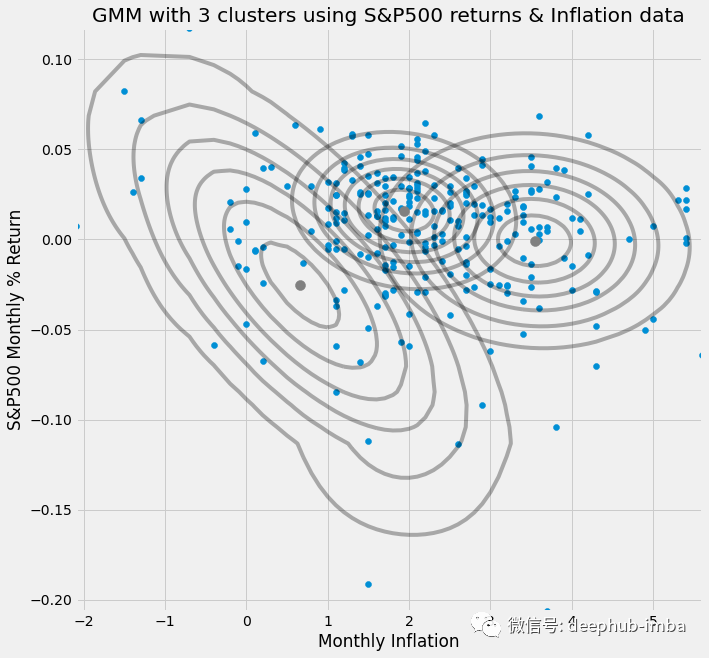 Finally, if you want to create a meaningful model, you should consider more variables. In fact, a series of different indicators constitute the U.S. economy and its performance. We can continue and merge any number of dimensions, but it is important to understand the relevant structure of the data provided to the model before entering the n-dimension.

This is a brief introduction to how we apply GMM to financial market and economy. Please remember that this is just an introduction. The GMM method is introduced to improve the robustness of classifying stock market price data into states. The relationship between market conditions and economy needs further research.