Detailed explanation of context package that beginners can understand: from introduction to mastery

Today, I want to share the context package with you. After a year of precipitation, I will start again and analyze it from the perspective of source code based on Go1.17.1. However, the difference this time is that I intend to start with the introduction, because most novice readers want to know how to use it first, and then they will focus on how to realize the source code.

I believe you will see such code in your daily work development:

Context is regarded as the first parameter (official suggestion) and is continuously transmitted. Basically, context is everywhere in a project code, but do you really know what it does and how it works? I remember when I first came into contact with context, my colleagues said that this is used for concurrency control. You can set the timeout time, and the timeout will be cancelled. I simply think that as long as the context parameter is passed down in the function, you can cancel the timeout and return quickly. I believe most beginners share the same idea with me. In fact, this is a wrong idea. The cancellation mechanism also adopts the notification mechanism. Simple transparent transmission will not work. For example, you write code like this:

Even if the context is transmitted through, it will not work without monitoring the cancellation signal. Therefore, it is necessary to understand the use of context. This article starts with the use and gradually analyzes the context package of Go language. Let's start now!!!

Origin and function of context package

From the official blog, we can know that the context package was introduced into the standard library in go1.7: 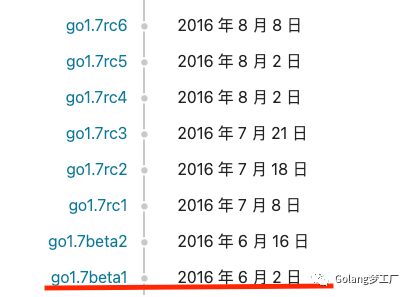 Context can be used to transfer context information between goroutines. The same context can be passed to functions running in different goroutines. The context is safe for multiple goroutines to be used at the same time. The context package defines the context type. You can use background and TODO to create a context and propagate the context between function call chains. You can also use WithDeadline Replacing it with a modified copy created by WithTimeout, WithCancel or WithValue sounds a little windy. In fact, it can be summarized in one sentence: the function of context is to synchronize the request for specific data, cancellation signals and the deadline for processing requests between different goroutines.

In fact, these two functions are just aliases of each other. There is no difference. The official definition is:

Therefore, in most cases, we use context.Background as the starting context to pass down.

The above two methods are to create a root context without any functions. The specific practice still depends on the With series functions provided by the context package: 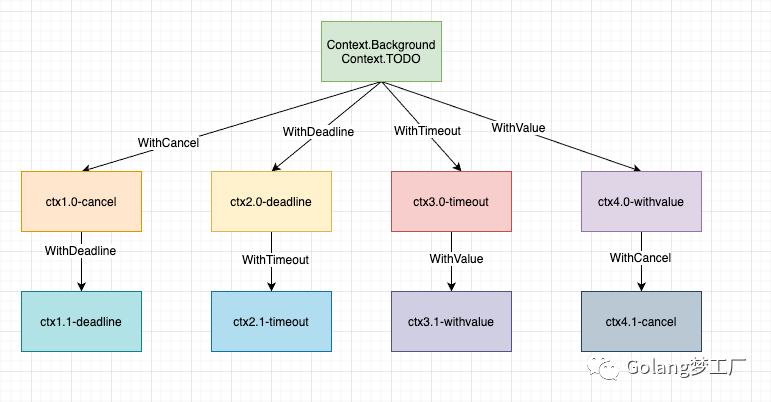 A parent context can be derived at will. In fact, this is a context tree. Each node of the tree can have any number of child nodes, and the node level can have any number of child nodes. Each child node depends on its parent node. For example, in the above figure, we can derive four child contexts based on Context.Background: ctx1.0-cancel, ctx2.0-deadline, ctx3.0-timeout ctx4.0-withvalue, the four child contexts can also be derived downward as the parent context. Even if the ctx1.0-cancel node is cancelled, the other three parent node branches will not be affected.

Create context methods and derivative methods of context. Let's take a look at how they are used one by one.

We hope to have a trace in our daily business development_ ID can connect all logs in series, which requires us to get the trace when printing the log_ ID can be passed by gevent.local in python, ThreadLocal in java, and context in Go language. A trace can be created by using WithValue_ ID context, and then continue to pass it through. You can output it when printing the log. Let's take a look at the use example:

We create a carry trace based on context.Background_ The ctx of ID is then passed together through the context tree. Any context derived from it will obtain this value. When we finally print the log, we can take the value from ctx and output it to the log. At present, some RPC frameworks support context, so trace_ It is more convenient to pass the ID down.

There are four things to note when using withVaule:

Usually, robust programs need to set timeout to avoid resource consumption due to long-time response of the server. Therefore, some web frameworks or rpc frameworks will use withTimeout or withDeadline for timeout control. When a request reaches the timeout we set, it will be cancelled in time and will not be executed further. The functions of withTimeout and withDeadline are the same, but the time parameters passed are different. They will automatically cancel the Context by passing in the time. Note that they will return a cancelfunction method, which can be called to cancel in advance, However, it is recommended to call cancelfunction to stop timing after automatic cancellation to reduce unnecessary waste of resources.

The difference between withtimeout and WithDeadline is that withtimeout takes the duration as the parameter input rather than the time object. Which of the two methods is the same depends on the business scenario and personal habits, because the essence of withTimout is also the called WithDeadline.

Now let's take an example to try out the timeout control. Now let's simulate a request and write two examples:

It is easy to use. It can be cancelled automatically when timeout occurs, and can be manually controlled. A hole to remember here is that the context in the call link transmitted from the request entry carries a timeout. If we want to open a goroutine to deal with other things and will not be cancelled after the request is completed, the delivered context should be re derived from context.Background or context.TODO, The veto will not be in line with expectations. You can see my previous article on stepping on the pit: A bug caused by improper use of context.

We use withCancel to create a Background based ctx, and then start a speech program to say a word every 1s. The main function cancels after 10s, and then speak will exit when it detects the cancellation signal.

Because Context is essentially an interface, we can achieve the purpose of customizing Context by implementing Context. Generally, this form is often used in the implementation of Web framework or RPC framework. For example, the Context of gin framework has its own encapsulation layer, and the specific code and implementation are posted here. If you are interested, you can see how gin.Context is implemented.

Context is actually an interface that defines four methods:

This interface is mainly inherited and implemented by three classes, namely emptyCtx, ValueCtx and cancelCtx. It is written as an anonymous interface, so that any type that implements the interface can be rewritten.

Let's analyze layer by layer from creation to use.

The object created when we call context.Background and context.TODO is empty:

Background and TODO are as like as two peas. The official says: background is usually used by main functions, initialization and testing, and is used as the top-level Context for incoming requests. Todo means that when it is not clear which Context to use or is not available, the code should use context.TODO, which will be replaced later. In the final analysis, it is just different semantics.

emptyCtx is mainly used when creating the root Context. Its implementation method is also an empty structure. The actual source code is as follows:

valueCtx aims to carry key value pairs for Context, because it adopts the inheritance implementation of anonymous interface. It will inherit the parent Context, which is equivalent to embedding in the Context

Look at the picture to understand: 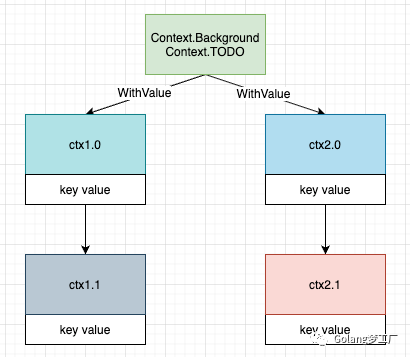 Therefore, when we call the Value method in the Context, we will call up layer by layer until the final root node. If the key is found in the middle, it will be returned. If not, we will find the final emptyCtx and return nil.

Let's take a look at the source code of the entry function of WithCancel:

The execution steps of this function are as follows:

cancelCtx inherits the Context and implements the interface canceler:

The Done method is implemented here, and the return is a read-only channel. The purpose is that we can wait for the notification signal externally through this blocked channel.

The specific code will not be posted. Let's go back to how propagatecontrol constructs the association between parent and child Context.

The code is a little long and the explanation is a little troublesome. It looks intuitive when I add comments to the code:

What really puzzles this code is the if and else branches. Don't look at the code, just say why. Because we can customize the context ourselves. When we insert the context into a structure, we will not find the cancelable parent node, and we can only restart a collaboration for listening.