The first option: Recursion algorithm is also the most frequently used, and most open source programs do the same, but generally only use four levels of classification. The database structure design of this algorithm is the simplest. A field ID and a field FID (parent id) in the category table. In this way, we can judge the upper level content according to WHERE id = fid, and use recursion to the top level. Analysis: the infinite level designed by this kind of database can be said to be very hard to read, so most of the programs can be classified into 3-4 levels at most, which is enough to meet the needs, so that all the data can be read out at one time, and then the array or object can be recursive. The load itself is not too big. But if it is classified to a higher level, it is not desirable. So it seems that this kind of classification has the advantage that it is easy to add, delete and modify However, in terms of the secondary classification, this algorithm should be the first.

The second option: Set the fid field type to varchar, and put the parent id in this field, separated by symbols, such as: 1,3,6 In this way, it is easier to get the ID of each superior classification, and when querying the information under the classification, You can use: SELECT * FROM category WHERE pid LIKE "1,3%".

Analysis: compared with recursive algorithm, it has a great advantage in reading data. However, if you want to find all the parent or child classifications of the classification, the efficiency of query is not very high. At least you need to query twice. In a sense, I don't think it is in line with the design of database paradigm. If increasing to infinite level, it is necessary to consider whether the field meets the requirements, and it will be very troublesome to modify the classification and transfer the classification. For the time being, solutions similar to the second solution are used in our own projects. There is such a problem in my project with this scheme. If all data records reach tens of thousands or even more than 10W, the classification and orderly classification will be realized at one time, with low efficiency. It is very likely that the low efficiency of data code processing in the project. Now it's improving.

The third option: Infinite level classification -- improved preorder traversal tree So what characteristics should the ideal tree structure have? Data storage has small redundancy and strong intuitiveness; it is convenient to return the whole tree structure data; it can easily return a certain subtree (convenient for layered loading); it can quickly obtain the ancestral spectrum path of a node; it has high efficiency in inserting, deleting and moving nodes, etc. With these requirements, I searched a lot of data, found an ideal tree structure data storage and operation algorithm, and improved The Nested Set Model. Principle: Let's lay the trees out horizontally first. Start at the root node ("Food") and write 1 on his left. Then write 2 to the left of "Fruit" in the order of the tree (from top to bottom). In this way, you walk along the border of the tree (this is called "traversal"), and then write numbers on the left and right sides of each node at the same time. Finally, we go back to the root node "Food" and write 18 on the right. The following is the tree marked with numbers, and the sequence of traversal is marked with arrows.

We call these numbers left and right (for example, the left value of "Food" is 1 and the right value is 18). As you can see, these numbers are on time for the relationship between each node. Because Red has two values, 3 and 6, it is a follow-up to the Food node that has a value of 1-18. Similarly, we can infer that all nodes with left value greater than 2 and right value less than 11 are the follow-up of "Fruit" nodes with 2-11. In this way, the structure of the tree is stored by left and right values. This method of calculating the nodes of the whole tree several times is called "improved preorder traversal tree" algorithm. 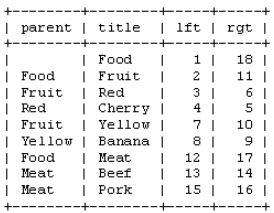 For more information about the third design, please click to see the original, because it is too complex (too heavy) and is not used frequently.

Infinite level classification (parent-child) is a common table design. Each design method not only highlights the advantages, but also brings defects, such as:

The design of the first scheme is the simplest. On this basis, we use FreeSql to implement totreelist (memory processing tree type) and astreecate (recursive down / up query), so as to meet the daily use of the public. 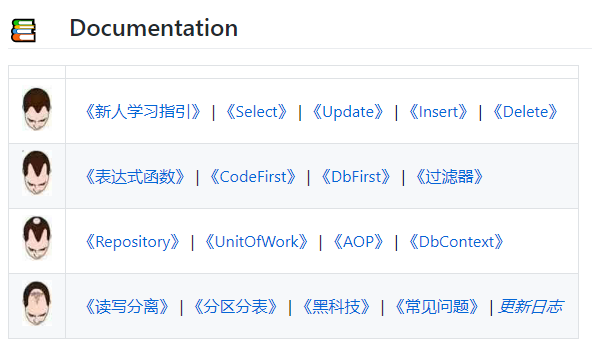 The author said: each function represents his hair!

Among the FreeSql navigation properties, there is a setting method for parent-child relationship. ToTreeList/AsTreeCte depends on this setting, as follows:

Define the Parent property. In the expression, you can:

To define the children attribute, in an expression, you can (subquery):

To define the children property, you can also use the [cascade storage],[greedy loading] And so on.

After the parent-child attribute is configured, you can use it as follows:

The query data is originally flat. The ToTreeList method processes the returned flat data in memory as a tree List.

Step 3: use AsTreeCte to query recursively

If we do not design infinite level classification table with data redundancy, recursive query is indispensable. AsTreeCte is exactly the encapsulation of recursive query. Method Parameter Description:

How do I return to the hidden field after setting the pathSelector parameter?

More poses... Please try according to the code comments