What is TCC? TCC is the abbreviation of Try, Confirm and Cancel. It was first proposed by a paper entitled Life beyond Distributed Transactions:an Apostate's Opinion published by Pat Helland in 2007.

TCC is divided into three stages

If we want to conduct a business similar to inter-bank transfer, the transfer out and transfer in are in different micro services respectively. The typical sequence diagram of a successfully completed TCC transaction is as follows: 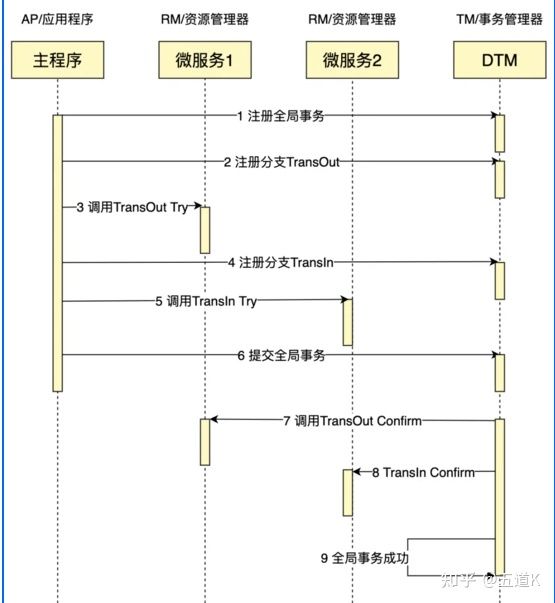 At this point, the processing functions of each sub transaction are OK, and then start the TCC transaction for branch calls

So far, a complete TCC distributed transaction is written.

If you want to run a successful example completely, refer to the example yedf / dtmcli Java sample, which is very simple to run

What if the bank finds that the account of user 2 is abnormal and fails to return when it is ready to transfer the amount to user 2? We can simulate this by having TransIn return a failure

We give the sequence diagram of transaction failure interaction 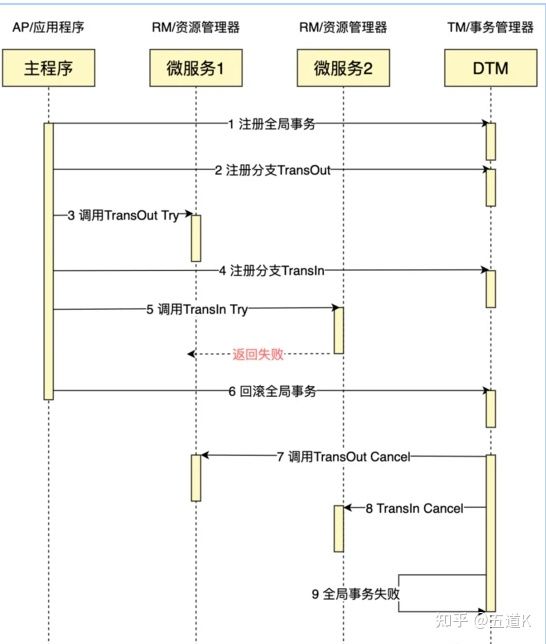 In the TCC transaction mode, many readers will ask, what happens if Confirm/Cancel fails? This is a good question, which means that you are thinking deeply about the TCC transaction mode. The first case is temporary failure, such as network failure, application or database downtime. Retry such errors and finally return success; The other case is business failure. According to the TCC agreement, resources are locked in the first stage to ensure that sufficient resources can be used for Confirm/Cancel execution. In other words, in program logic, Confirm/Cancel is not allowed to return business failure. If a business failure occurs, it is a bug and needs to be manually repaired by the developer.

In this article, we introduce the theoretical knowledge of TCC, and give a complete process of writing a TCC transaction through an example, including normal successful completion and successful rollback. I believe readers have a deep understanding of TCC through this article.

The examples used in this article are excerpted from yedf/dtm. It supports a variety of transaction modes: TCC, SAGA, XA and cross language support for transaction messages. It has supported clients in golang, python, Java, PHP, nodejs and other languages. Refer to the SDK s of various languages. It provides sub transaction barrier function to gracefully solve idempotent, suspension, null compensation and other problems.