Why is there dynamic memory management

How to manage space?

Use of flexible arrays

Why is there dynamic memory management

1. You can apply for large memory for large-scale applications

2. The application can be made during the running of the program, and the memory space can be used more flexibly.

(malloc() function is used to apply for space. It can only be called when the program is running. The compilation process has already passed.)

How to manage space?

Apply for space and use through malloc function, and release space with free function

2. If the requested memory is not returned, it will cause memory leakage.

When the process exits, the memory leak problem is gone.

3. The application has a size. Free didn't tell us how many bytes should be released? So how does free know how much to release? At present, the free parameter can only know where to release.

When applying, the space actually applied for will be larger than the space you want, and the larger part will be used to save the "original information" of this application

4. Heap space is suitable for the application of large space (because more application space is needed to save attribute information)

5. What exactly did free do?

Cancel the relationship between the address saved inside the pointer and heap space, but the value of the pointer remains unchanged. Therefore, it is recommended to set the pointer to NULL after free ing space.

This function requests a block of memory Continuous availability And returns a pointer to this space.
If the development is successful, a pointer to the developed space is returned.
If the development fails, a NULL Pointer, therefore malloc The return value of must be checked.
The type of the return value is void* , so malloc The function does not know the type of open space, which is determined by the user when using it.
If parameter size by 0 ， malloc The behavior of the standard is undefined and depends on the compiler. (vs2013 can).
C Language provides another function free , which is specially used for dynamic memory release and recovery. The function prototype is as follows:
free Function is used to free dynamic memory.
If parameter ptr The space pointed to is not dynamically opened up, so free The behavior of the function is undefined.
If parameter ptr yes NULL Pointer, the function does nothing.

The realloc function can adjust the size of the requested memory.

ptr is the memory address to be adjusted; New size after size adjustment; The return value is the adjusted memory starting position.

(therefore, the validity of the p pointer should be checked after applying for space)
2, Cross border access to dynamic open space

4, Use free to release part of the memory space (it must be applied and released as a whole) 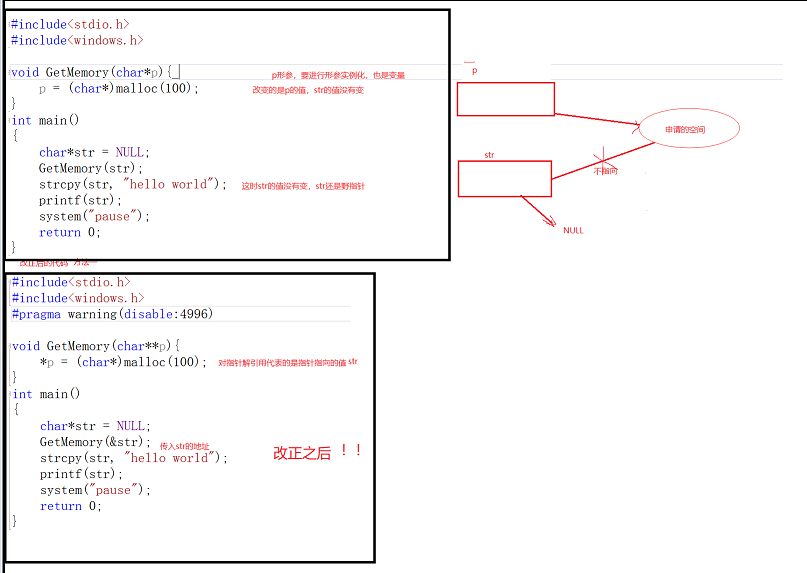 Note: the free space in the computer will not empty the data (the setting data is invalid), so str still points to Hello world

It can be seen from the figure above that the function has been executed, but Hello world still exists, so why not output str?

That's because printf is also a function, and it needs to open up space on the stack to be called, so it will overwrite the space originally saved for Hello world data, so it can't be output.

The validity of the parameters is not judged, and the space requested by malloc is not released (memory leakage may occur!!).

After free releases the space, the str pointer is not equal to NULL, but the space can not be used. Therefore, it is generally recommended to set the pointer to NULL after space release.

Use of flexible arrays

This allows flexible array members a , equivalent to obtaining 100 A continuous space of integer elements.

The above code can also be written as:

above code 1 and code 2 Can do the same function, but method 1 Easy memory release
If our code is in a function for others, you make a secondary memory allocation in it and return the whole structure to the user
User call free The structure can be released, but the user does not know that the members in the structure also need to be released free , so you can't expect users to send
Now this thing. Therefore, if we allocate the memory of the structure and the memory required by its members at one time, and return a structure to the user
Pointer, the user does it once free You can free up all the memory.