this series is written word by word, including examples and experimental screenshots. Due to the complexity of the system kernel, there may be errors or incompleteness. If there are errors, criticism and correction are welcome. This tutorial will be updated for a long time. If you have any good suggestions, welcome feedback. Code words are not easy. If this article is helpful to you, if you have spare money, you can reward and support my creation. If you want to reprint, please attach my reprint information to the back of the article and state my personal information and my blog address, but you must notify me in advance.

If you look from the middle, please read it carefully Yu Xia's view of Win system kernel -- a brief introduction , easy to learn this tutorial.

Use of kernel API

in application layer programming, we can use various API functions provided by WINDOWS, as long as we import the header file windows.h. However, during kernel programming, Microsoft provides a special API for kernel programs, which can be used as long as the corresponding header file is included in the program, such as: #include < ntddk. H >, provided that you have WDK installed.
what if you encounter a function that you can't or don't know how to use the function? When programming in the application layer, we use MSDN to understand the details of functions. When programming in the kernel, we should use WDK's own help documents.
however, the WDK documentation only contains functions exported by the kernel module, and functions not exported cannot be used directly. If you want to use an unexported function, you can use it as long as you define a function pointer and provide the correct function address for the function pointer. There are two ways to get the address of the exported function: signature search and parsing the kernel PDB file. The one and only one encoding as like as two peas is the same as the hard encoding. For the last method, let's think about why WinDbg is so powerful. Why can WinDbg easily analyze some structures or function names? The essential reason is that it has a symbolic file and can parse it, that is, PDB file. That is why we need to equip it with symbol file path before.

during kernel programming, it is strongly recommended that you follow the coding habits of WDK and do not write: unsigned long length;, It is suggested to write as follows: ULONG length.
the following are WDK habits and our regular habits:

the return values of most kernel functions are of NTSTATUS type, such as:

this value can describe the result of function execution, such as:

when you call the kernel function, if the returned result is not STATUS_SUCCESS indicates that there is a problem in the function execution. The specific problem can be viewed in the ntstatus.h file.

when an exception occurs, it can be determined according to the filter_value to determine if the program should be executed, when filter_ The value of value is:
one ️⃣ EXCEPTION_EXECUTE_HANDLER(1): the code enters the except block
two ️⃣ EXCEPTION_CONTINUE_SEARCH(0): do not handle exceptions, which are handled by the calling function of the upper layer
three ️⃣ EXCEPTION_CONTINUE_EXECUTION(-1): go back and continue to execute the code at the error

the use of memory mainly includes application, setting, copying and release. We are writing 3-ring applications and functions corresponding to the kernel, for example, see the help documents of MSDN and WDK for specific use:

of course, there are many kernel functions corresponding to malloc, but many of them have been discarded. The function description is as follows:

why does the kernel use such a string? Mainly for safety reasons. When we first learned C language, we often printed strings such as hot because it printed strings that didn't end with 0. If this problem occurs in the kernel, it is easy to cause a blue screen. Therefore, the modified structure is used to ensure safety. Of course, there are special functions for processing such strings in the kernel, which I will continue to introduce next.

the common functions of strings are nothing more than creation, copy, comparison, conversion and so on. Their functions are as follows. Please check the help document of WDK for details:

in the last tutorial, we used a piece of code to test whether the driver can be loaded and executed. Let's analyze it. The code used last time is as follows:

refers to the driver_ Pointer to the object structure. After a driver file is loaded, its complete information will be returned to us. Let's take a look at driver_ What is stored in the object structure? The following is the definition in the header file:

since it is the basis of explanation, we will choose the most important ones to explain. However, in order to facilitate learning drive, we have made minor modifications to the above code:

then compile and let the virtual machine load the driver. As shown in the figure below, then we get its first address: 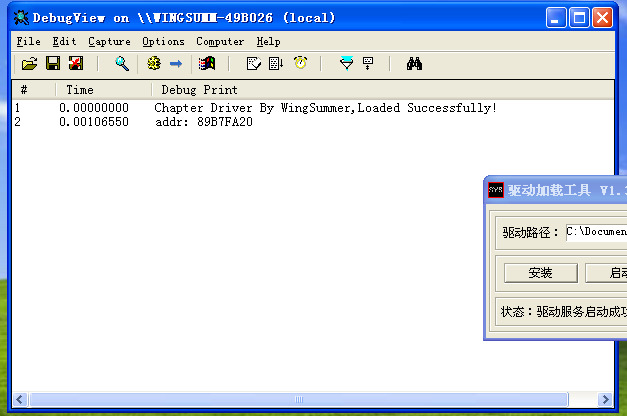 the starting address of the drive object after loading.

the memory size after the driver object is loaded.

it is an LDR that stores all currently loaded driver information_ DATA_ TABLE_ Bidirectional circular linked list of entry structure. Through this thing, we can string them all. Through this, we can also traverse them. Let's take a look through WinDbg. Let dt's talk about the DriverSection of the driver written by ourselves:

then we move on to dt the next member:

it can be seen that we can traverse the driver information through this linked list.

indicates the name of the driver object, which is a_ UNICODE_ The structure of string.

the unloading address of the driver object. If it exists, it will be called. Its definition:

the remaining members who are not introduced will continue to explore on their own if they are interested.

the full name of IRQL is Interrupt Request Level, that is, the priority of interrupt execution. It is a set of priority schemes defined by Windows. It has nothing to do with CPU. The higher the value, the higher the permission. Interrupt includes hard interrupt and soft interrupt. Hard interrupt is generated by hardware, while soft interrupt is completely virtual. The processor executes thread code on an IRQL, and each processor's IRQL determines how it handles interrupts and which interrupts it is allowed to receive. On the same processor, threads can only be interrupted by higher-level IRQL threads. Each processor has its own interrupt IRQL. There are four common IRQL levels: Passive, APC, Dispatch, and DIRQL. PASSIVE_LEVEL is the lowest level. There are no masked interrupts. The thread executes user mode and can access paging memory. APC_LEVEL only APC level interrupts are masked and can access paging memory. When an APC occurs, the processor is promoted to the APC level and other APCs are shielded. DISPATCH_LEVEL can mask DPC (delayed process) and lower interrupts, and cannot access paging memory. Because only paging memory can be processed, the number of API s that can be accessed at this level is greatly reduced. For our kernel security, it is enough to understand these. The following is the schematic diagram of IRQL: 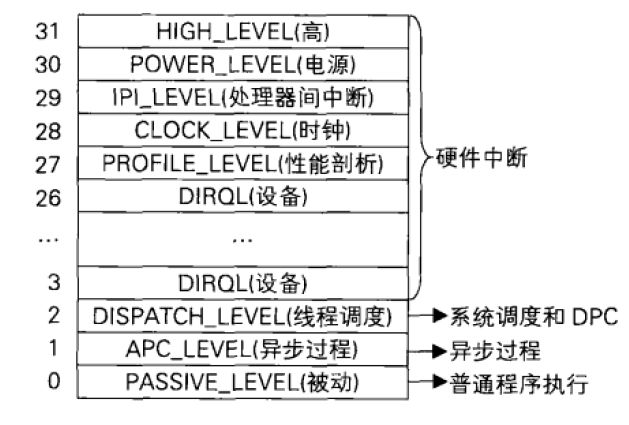 pay special attention to IRQL when writing kernel programs. There are a lot of blue screens.

The answers in this section will be explained in the next section. Be sure to read the next explanation after completing this section. Don't be lazy. Experiment is a shortcut to learn this tutorial.

as the saying goes, you can only speak without practicing the fake skill. The following are the relevant exercises in this section. If you don't do well in the exercise, don't look at the next tutorial. If you don't do the exercise, it's easy to get mixed up. At first, you still understand, and then you really don't understand at all. There are not many exercises in this section. Please complete it with quality and quantity.

one ️⃣ Write a driver, apply for a piece of memory, and store all the data of GDT table in memory. Then it is displayed in DebugView, and finally the memory is released.