DcokerFile is a file used to build a docker image. It is a command parameter script

2. docker build builds into an image

4. docker push publish image (we can publish it to DockerHub or alicloud)

For example, we search ubuntu on DockerHub to see what DockerFile looks like on the official website 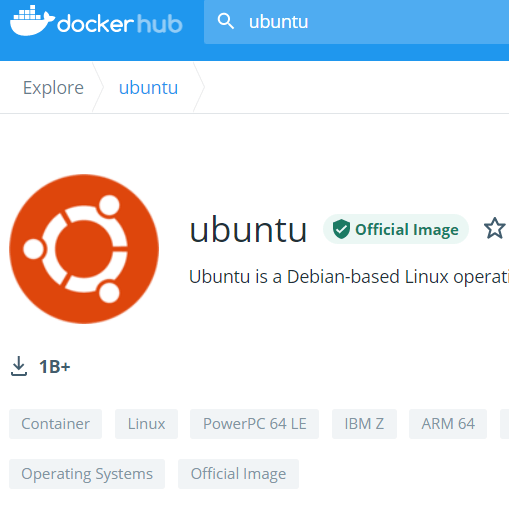 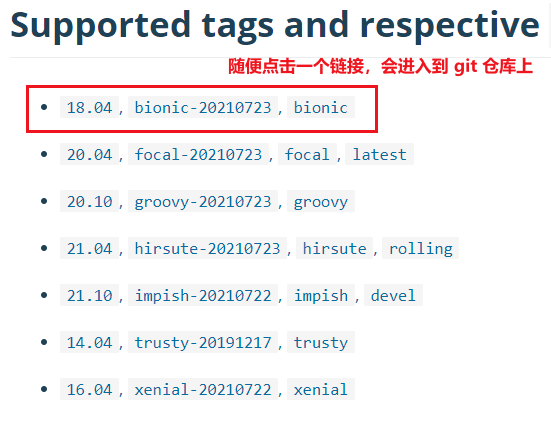 Click the link and we will enter the git warehouse, which is also DockerFile 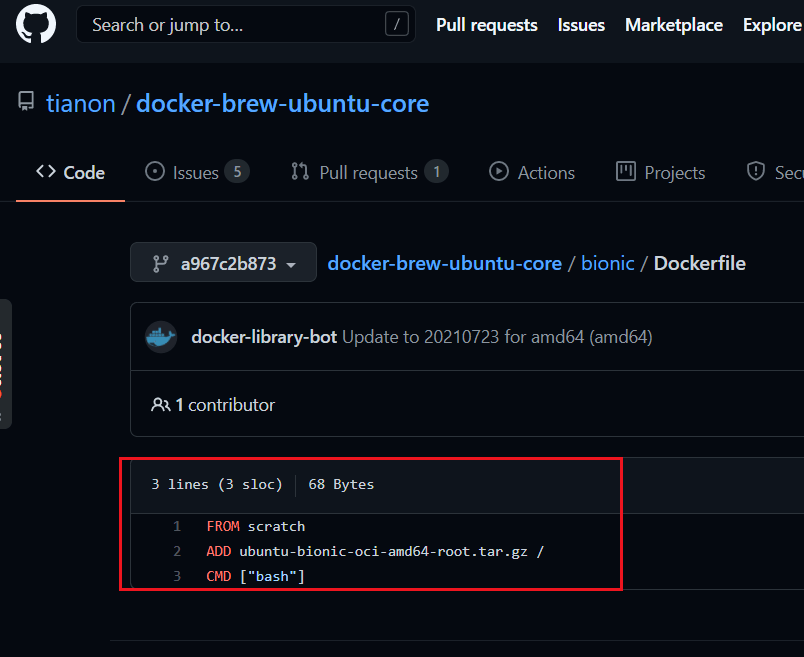 We can see that the three-line Docker command is the DockerFile officially made into an image, so the official ubuntu image is very simple, castrated, not even the clear command or the ll command

Many official image packages are very simple, and many functions are not available. We usually build our own images to meet our various needs

Officials can build images, and we can also create our own images

You can find such pictures on the network. You can see that the image is layer by layer. You can search the instruction explanation in DockerFile on the browser 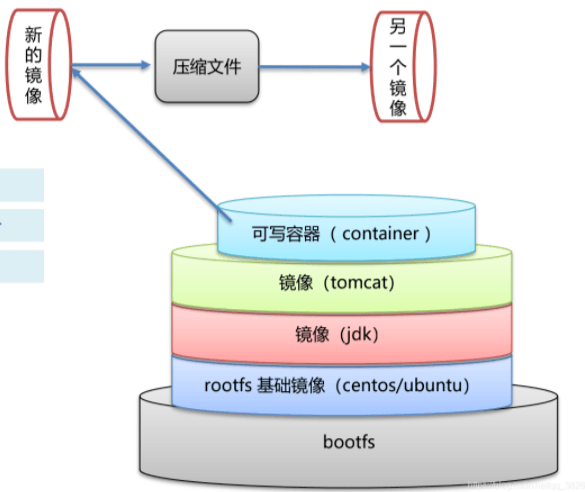 DockerFile is development oriented. When we do projects in the future, we directly release an image and deliver an image. We need to write a DockerFile file. This file is very simple!

We must master the Docker image, which has gradually become the standard for enterprise delivery.

Our learning process is to use other people's things first, then study how others write, and then we also learn how to write and develop

Let's learn to use it first,

Docker container: the container service is the server running with the image

Now let's start to learn DockerFIle in detail: build the file, define all the steps, and this is the source code

The pictures come from the Internet. We explain them one by one 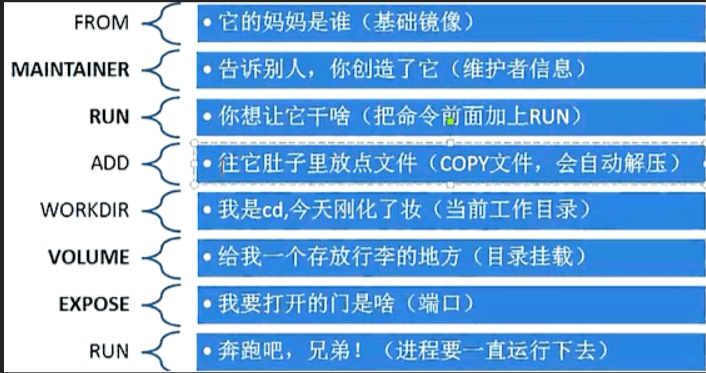 The basic image, everything starts from here

Commands to run during image construction

Add some configurations, such as adding mysql compressed packages and adding content

Exposing ports and - p is an effect

Specifies the command to be executed when the container is started, and can be appended

When an inherited DockerFIle is built, the ONBUILD instruction will be run to trigger the corresponding action

Similar to ADD, this command copies the file to the image

At first glance, it seems that the functions of CMD and ENTRYPOINT are similar, but it is still not clear where the specific difference is. There will be a detailed description at the end of the article

The official ubuntu is a castrated version. Many tools and commands are not supported, so we will add them ourselves and be self-sufficient

Write a DockerFile by yourself

It should be noted here that basically 99% of the images are based on this basic image scratch. We can see that the official DockerFIle is also played based on this image 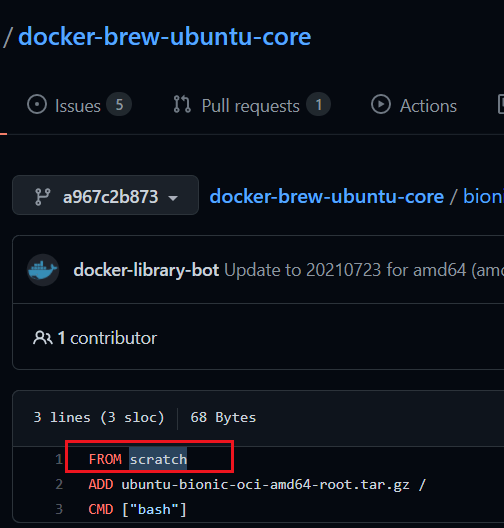 Then we can customize based on this ubuntu and add some tools we need, such as vim, ifconfig, etc

If the apt get update update source is not written in DockerFile, the following problem will occur. Please pay attention to this

When you execute the above command, you will see the following print information, and finally you will see successful, that is, the build is successful 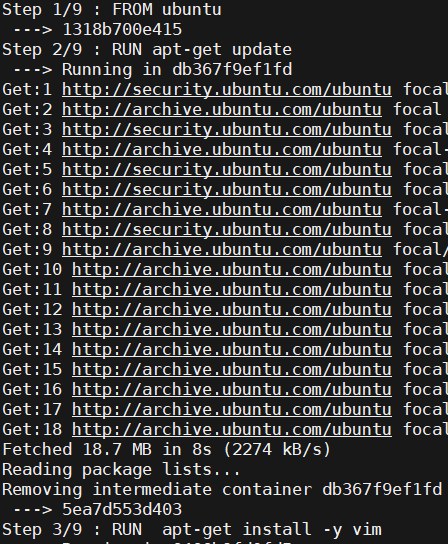 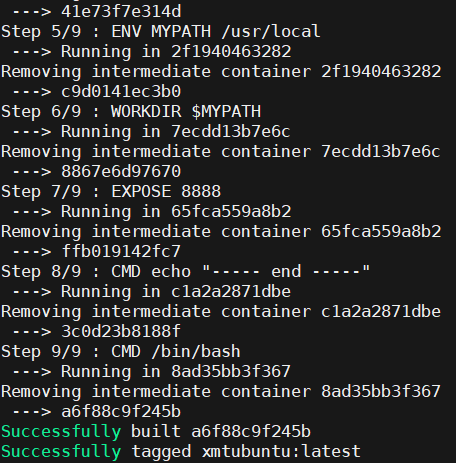 As can be seen from the above figure, there are 9 steps in DokerFile, and the execution is divided into 9 steps. Only when all the steps are successful can it be regarded as success

After the final build is successful, we can see

docker inspect a6f88c9f245b view the construction process of our image

In the process of building the image xmtubuntu, we can clearly see what steps have been taken. Of course, in the same way, we can also see how the official image is built. Let's take a look at the official ubuntu image

The official is very simple, castrating a lot of things. We can see that the official ubuntu consists of two steps. The first is to add the ubuntu compressed package, and the second is / bin/bash 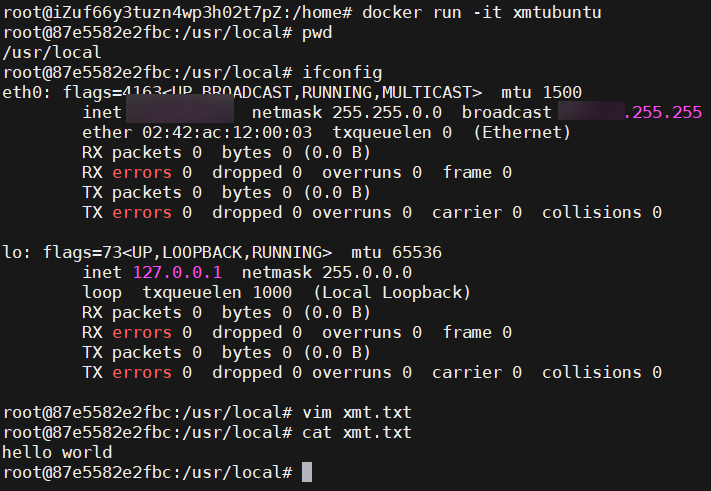 Sure enough, our custom ubuntu image has vim and ifconfig tools, and the actual combat is successful

Difference between CMD and ENTRYPOINT

Specifies the command to be executed when the container is started, and can be appended

How to understand? Let's do a comparative experiment to better understand the above explanation. There are many commands in docker that have such minor differences. We can draw inferences from one instance and learn more slowly

Create and start the container

We try to append commands when we start the container

The reasons are as follows:

The CMD instruction is used (for example, our example is ls -a). When we start the container, the command (- l) appended later will replace ls -a. because - l is not a command, an error is reported 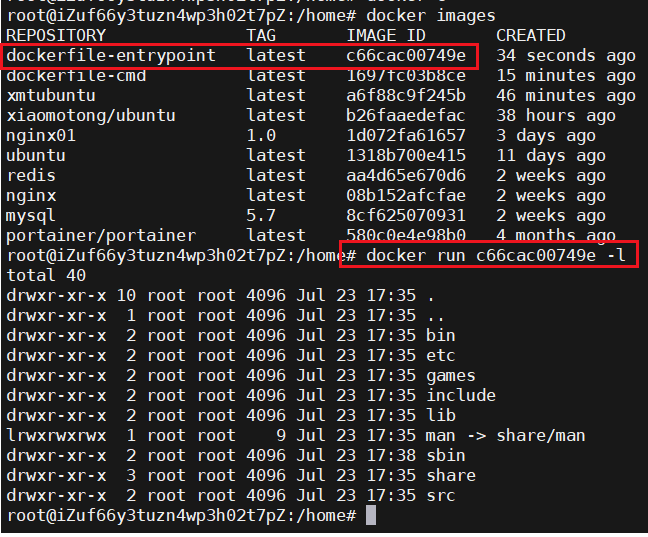 Then, we can draw inferences from one instance and do comparative tests for relevant instructions in the future, so that we can understand them more clearly

How to publish our images

xdm without registration can register one, hub.docker.com/

3. Push the image to our own warehouse 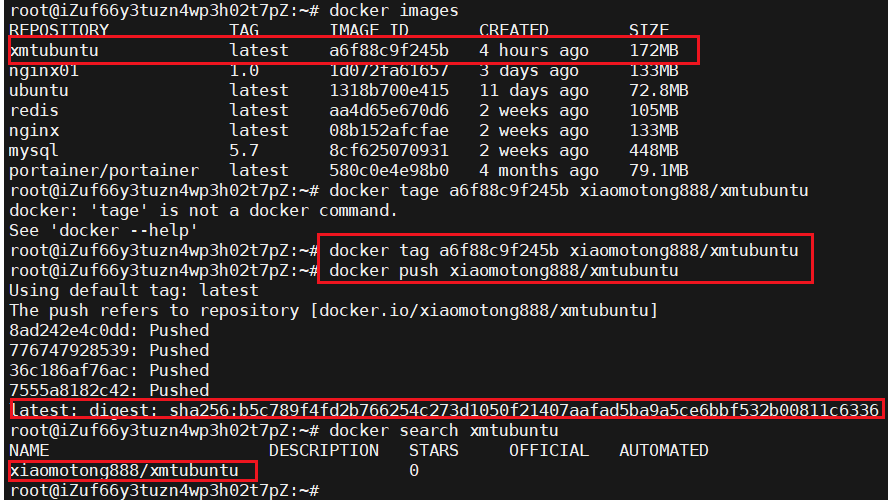 When publishing images, they are submitted layer by layer

Finally, add a picture found on the network. Now you can see the principle more clearly by looking at this picture 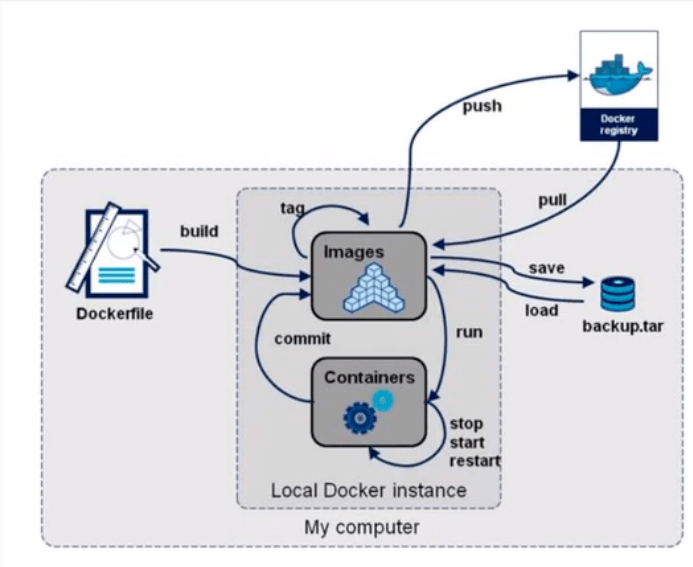 My friends, your support and encouragement are the driving force for me to insist on sharing and improve quality

Well, that's all for this time

Technology is open, and our mentality should be open. Embrace change, live in the sun and strive to move forward.

I'm Nezha, the Little Devil boy. Welcome to praise and pay attention to the collection. See you next time~