2, The meaning of Dimitri's law

Dimitri's law, also known as the principle of least knowledge, although its name is different, it describes the same rule: an object should have the least understanding of other objects. Generally speaking, a class should know the least about the classes it needs to couple or call. It doesn't matter to me how complex the interior of the coupled or called class is. I know that I call so many public methods you provide, and I don't care about the rest.

2, The meaning of Dimitri's law

(1) Only communicate with friends

For example, the teacher asked the sports committee to confirm whether all the girls in the class were here? The class diagram is shown in the following figure: 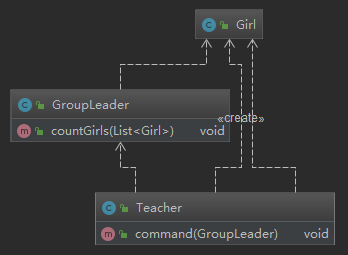 The teacher has only one method, command, first define all the girls, and then issue an order to the sports committee to count the number of girls.

The code of sports Commissioner GroupLeader is as follows:

Both the teacher class and the sports committee class depend on the Girl class, and the Girl class does not need to perform any action, so it is defined as follows:

The sports committee counted the girls according to the teacher's requirements and got the number. Let's go back and think about the problems with this program. First, make sure that the teacher class has several friend classes. It has only one friend class - GroupLeader. Why isn't Girl a friend class? Teacher has a dependency on Girl class. The definition of friend class is as follows: the classes that appear in member variables, method input parameters and output parameters become member friend classes. The Gril class appears inside the command method, so it does not belong to teacher's direct friend.

Demeter's law tells us that a class only communicates with friend classes, but the command method we just defined communicates with Girl class and declares list < Girl > dynamic collection, which destroys the robustness of Teacher.

The problem has been found. We modify the program and slightly adjust the class diagram, as shown in the following figure: 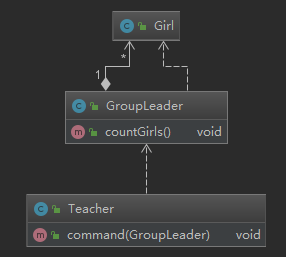 A constructor is defined in the GroupLeader class, and the dependency is passed through the constructor. At the same time, some adjustments have been made to the scene class:

The program is simply modified, the initialization of Teacher's list < Girl > is moved to the scene class, and the injection of Girl is added in GroupLeader, which avoids Teacher's access to unfamiliar class Girl, reduces the coupling between systems and improves the robustness of the system.

(2) There is also a distance between friends

There is a distance between people, too far away, the relationship gradually alienated, and finally become a stranger; Too close to stab each other. Demeter's law is to describe this distance. Even friends can't say everything and know everything.

When installing software, we often have a guiding action. The first step is to confirm whether to install, the second step is to confirm Lisence, and then select the installation directory... This is a typical sequential action. Specifically, in the program, we call one or more classes, execute the first method, and then the second method, According to the returned results, we can see whether the third method or the fourth method can be called, and so on. The class diagram is as follows: 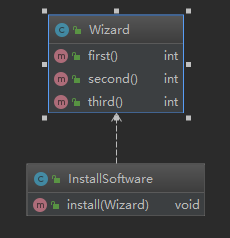 Three step methods are defined in the Wizard class. In each step, relevant business logic completes the specified task. We use a random function to replace the return value of business execution.

The code of InstallSoftware class is as follows:

Decide whether to continue to execute the next method according to the execution results of each method, and simulate the manual selection operation. The scene classes are as follows:

The above program is very simple. The running results are related to random numbers. The results of each execution are different. Readers need to run and view the results themselves. Although the program is simple, the hidden problem is not simple. What's the problem with the program?

The Wizard class exposes too many methods to the InstallSoftware class. Their friendship is too close, and the coupling relationship becomes very strong. If you want to change the type of the return value of the first method in the Wizard class from int to boolean, you need to modify the InstallSoftware class to spread the risk of modification and change. Therefore, this coupling is inappropriate. We need to reconstruct the design. The reconstructed class diagram is as follows: 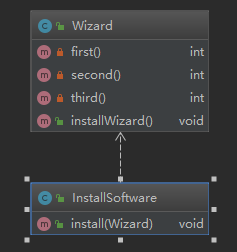 Add an installWizard method in the Wizard class to encapsulate the installation process, and modify all three public methods to private methods, as follows:

Tell me, the access rights of the three steps are changed to private, and the method installWizard() in InstallSoftware is moved to the Wizard class. After such refactoring, the Wizard class only publishes a public method. Even if you want to modify the return value of the first method, it only affects the Wizard itself, and other classes are not affected, which shows the high cohesion of the class.

The modified InstallSoftware code is as follows:

There is no change in the scene class. Through refactoring, the coupling relationship between classes becomes weaker, the structure is clear, and the risk caused by change becomes smaller.

The more public attributes or methods a class exposes, the greater the scope involved in modification and the greater the risk diffusion caused by change. Therefore, in order to maintain the distance between friends, it is necessary to repeatedly measure in the design: whether public attributes and methods can be reduced, whether access permissions such as private, package private and protected can be modified, and whether final keywords can be added.

The core concept of Dimitri's law is inter class decoupling and weak coupling. Only after weak coupling can the reuse rate of classes be improved. The result of its requirements is to produce a large number of transfer or jump classes, which not only increases the complexity of the system, but also brings difficulty to maintenance. Readers need to weigh repeatedly when using Dimitri's law, not only to make the structure clear, but also to achieve high cohesion and low coupling.