There are three ways to create strings:

2, Conversion of characters, bytes and strings

1. Conversion between character and string

Because a String is equivalent to a collection of characters, to convert a character into a String, you need to call the String construction method and pass in a character array. For example:

Because a string is a collection of characters, it can be converted to a character or an array of characters. For example, 0 and 1 in parentheses are offset, and the offset starts from 0. Therefore, take 3 characters back from the position where the offset is 0 to form a string.

If the string is to be converted to a single character, the code is as follows:

If the string is to be converted to a character array, the code is as follows:

2. Conversion between byte and string

Many beginners will think that "= =" is compared with equals in the same way. In fact, there is a big difference.
For two strings, use "= =" to compare the references of variables. The equals method of String compares the contents of two strings. But here's another question: why is every String constant defined by a reference? This involves the String constant pool.

When a String constant is stored in the String constant pool, a node will be generated at a location calculated according to the hash function. The node is composed of the hash value, the address of the String node and the address of the next node at the location where the array is stored (this can be really understood in the original code of the JVM). Each String node is composed of a character array value and a hash value hash (0 by default) (as shown in the figure below). You can find these two variables by clicking String to see its original code. At this time, observing that the value array is modified by final indicates that the characters in the array cannot be changed, which is why the String is a constant, and the String will be converted into character form and stored in the character array.

Let's take a simple example to understand the memory layout of the string constant pool.
The code is as follows:
Code 1:

The memory layout is as follows:

Manual pool entry:
We know from the above figure that the running result in code 2 is false, because str2 points to the String object generated by new String, not the address of the String object storing "hello". What would happen if it were written as the following code?

This code is about string splicing. In fact, "he" and "llo" have been compiled as "hello" at compile time. If you want to see what string str2 is at compile time, click the Build option and click the Build Project option to compile (Figure 1). Under the path of such files (including. Class files) (Figure 2 + Figure 3), hold down the shift key and right-click the powershell window, enter the decompile instruction javap -c class name, and you can see whether str2 is a spliced hello at compile time. 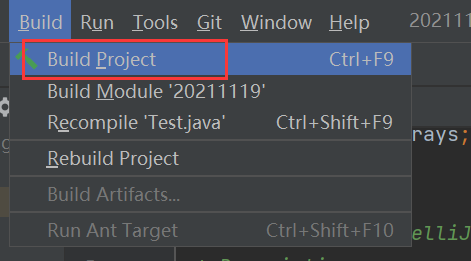 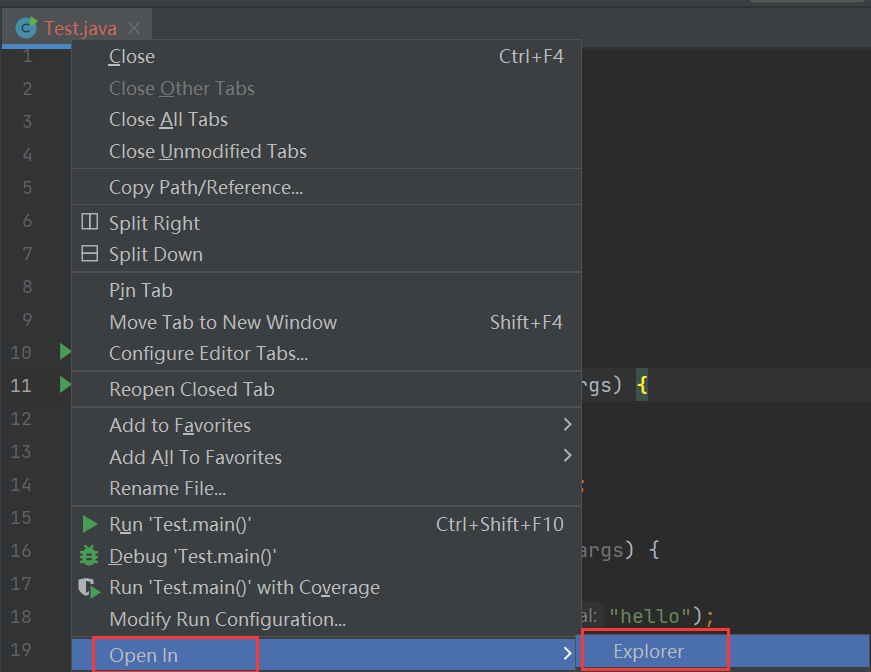 Figure 3: go back to the previous folder, click out - > production - > the name of the folder where the bytecode file is located - > hold down shift, click the right mouse button and click into the powershell window - > enter the javap -c class name

Through decompilation, we can see that StringBuffer is generated, and StringBuffer calls toString method to generate an object storage "11" of String class. It can be fully understood from Figure 1 and Figure 2. 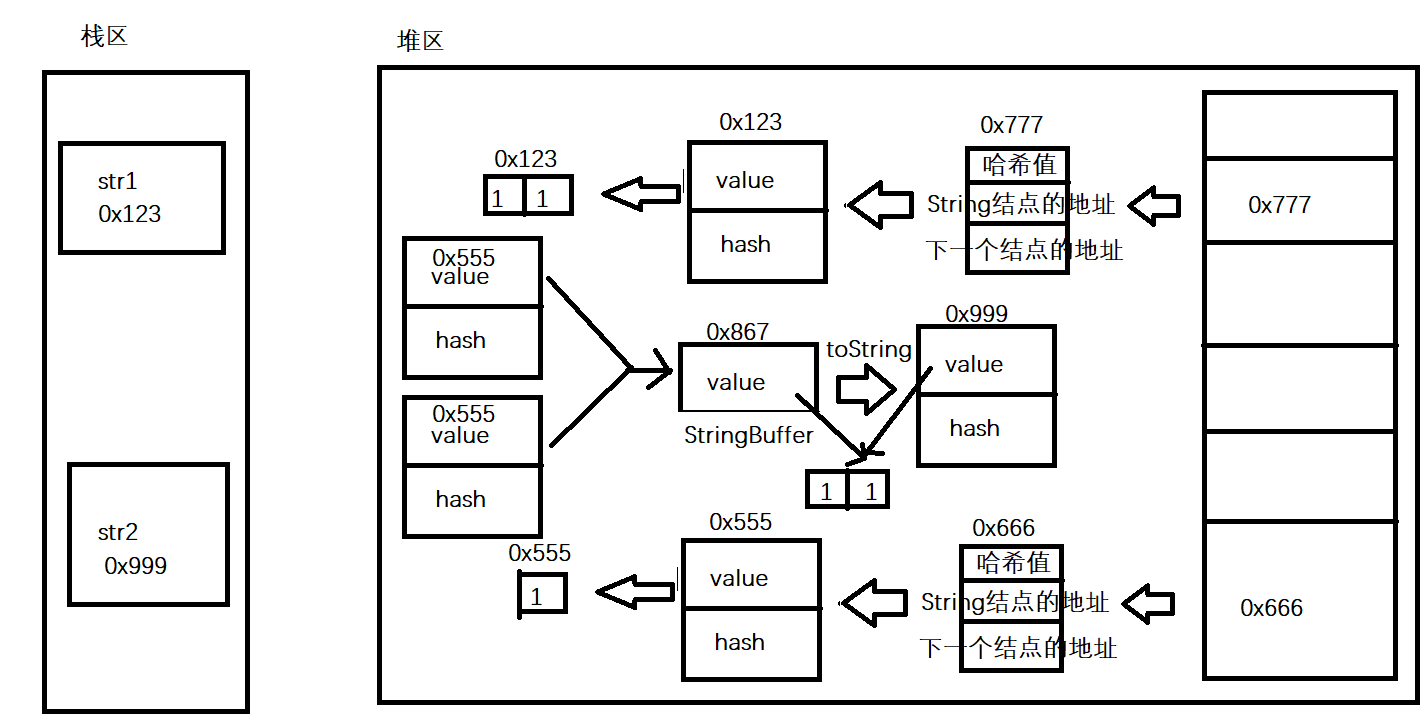 For string comparison, we cannot use "= =" directly, but there are three methods to compare strings in different ways.

It is compared character by character. If str1 is greater than str2, the value of str1 minus str2 is returned. For example:

Because the ASCII value of b is 1 greater than that of a, it returns - 1 directly. (if the characters are different, return their ASCII code difference)

The following is the implementation of the compareTo method of the String class. 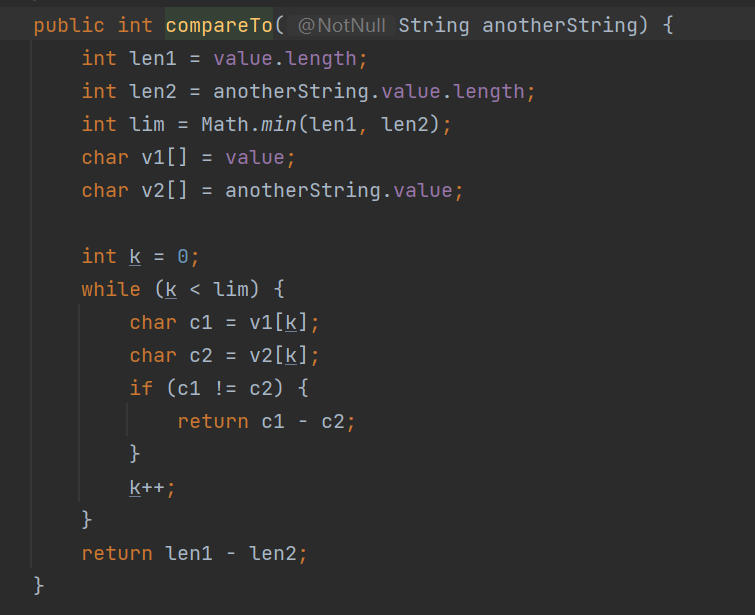 1. Judge whether a substring exists in the main String: call the contains method of String class, and the return value is boolean.

2. Find a substring from the beginning and return the index position from the first substring. If not, return - 1. You can also pass in an index to indicate where to start searching, and call the indexOf method in the String class.

5. Judge whether a String ends with a specified substring. Call the endsWith method in the String class.

You can also choose to replace the first content in the String. Call the repalceFirst method in the String class.

Since the string is an immutable object, the replacement does not modify the current string, but produces a new string.

The specified String can be divided into several groups based on the main String, which is equal to several String arrays. Therefore, the contents of the split array can be traversed through the foreach loop. Call the split method of the String class.

Of course, string splitting can be nested, that is, it can be split into two parts first, and then split according to another string.

There are several special cases for string splitting. When the character to be split is an escape character, two more slashes need to be passed in the specified string. For example:

For string splitting, you can also split according to multiple specified strings, which are separated by '|'.

For the above string operation method, we can check its original code to better understand how the method operates.

8, Other common methods in String class

1. trim method of string class. This method is used to remove the left and right spaces in the string, and the spaces in the middle of the string will not be removed.
code:

3. concat method in string class. This method is used to connect strings, which is equivalent to splicing in strings, but the connected strings will not be put into the string constant pool. It will not be demonstrated here.

5. isEmpty method in string class is used to judge whether the string is empty.
code:

After understanding the above String constant pool, we know that String is constant and immutable. When splicing, Java will optimize the splicing of String class objects to the splicing of StringBuffer during compilation (no new objects will be generated) Therefore, there are StringBuffer and StringBuilder in Java to process strings, and when they are spliced, they will not produce new objects, but spliced on the basis of the original String. Later, we will discuss the difference between StringBuilder and StringBuffer.
There is an append method in StringBuilder that can splice strings on the original basis. For example, when we have such code:

The append method can also be used in parallel. The code is as follows:

1. The difference between StringBuilder and StringBuffer

2. Common methods of StringBuilder and StringBuffer

The methods commonly used by StringBuilder and StringBuffer are generally not available in String classes, such as append method, delete method, reserve method, insert method, etc.

Many people think that if you pass a reference to a function and point to another object, you can solve "all problems". In fact, it is not. The following example can illustrate the problem.
code:

As a result, why doesn't str point to hello and char change from the original hello to gello? After learning the string constant pool, we learned that the string constant pool can only store one string constant with the same content. Therefore, str1 in the passed func function is a formal parameter. str1 points to the new object "hello", but str in the main function still points to abcd. chars is really based on the original array. There is no problem that the character of 0 subscript is changed to 'g', and the final printed result is [g, e, l, l, o]. The diagram is as follows: 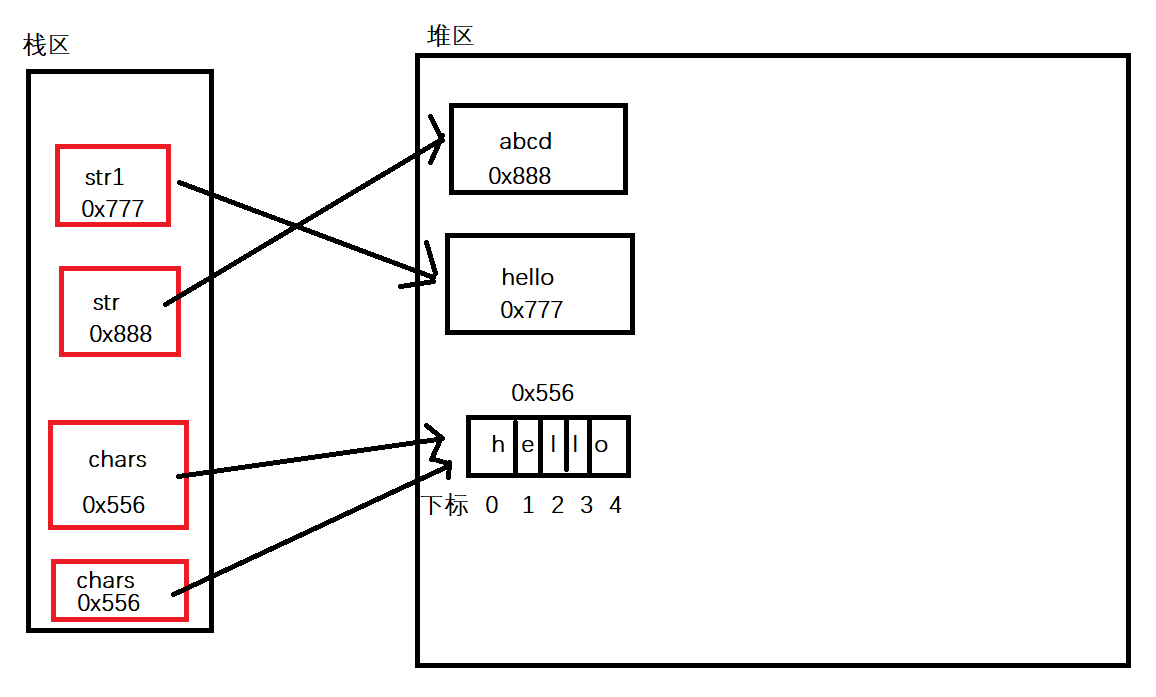