Detailed explanation of various backup and restore postures of database

Cold and hot backup of database

Data export is not exactly equal to data backup:

A single node database needs to be shut down during cold backup, which will have an impact on the business system. To solve this problem, we can build a cluster and then select a node in the cluster for cold backup. Because there are other nodes running in the cluster, you don't have to worry about affecting the running system. Start the node after the backup is completed, so as to solve the impact of downtime backup

In the same way, in order to avoid global locking, we can select one node in the cluster to perform hot backup after the data synchronization relationship with other nodes is removed. Wait for the backup to complete before restoring the data synchronization relationship with other nodes in the cluster. In this way, during the backup process, only this node will add a read lock, and other nodes will not be affected

How to select online hot backup and online cold backup:

As mentioned in the previous section, data backup refers to copying the relevant files of data storage in the database. There are many of these files, so let's briefly understand the data related files in MySQL. 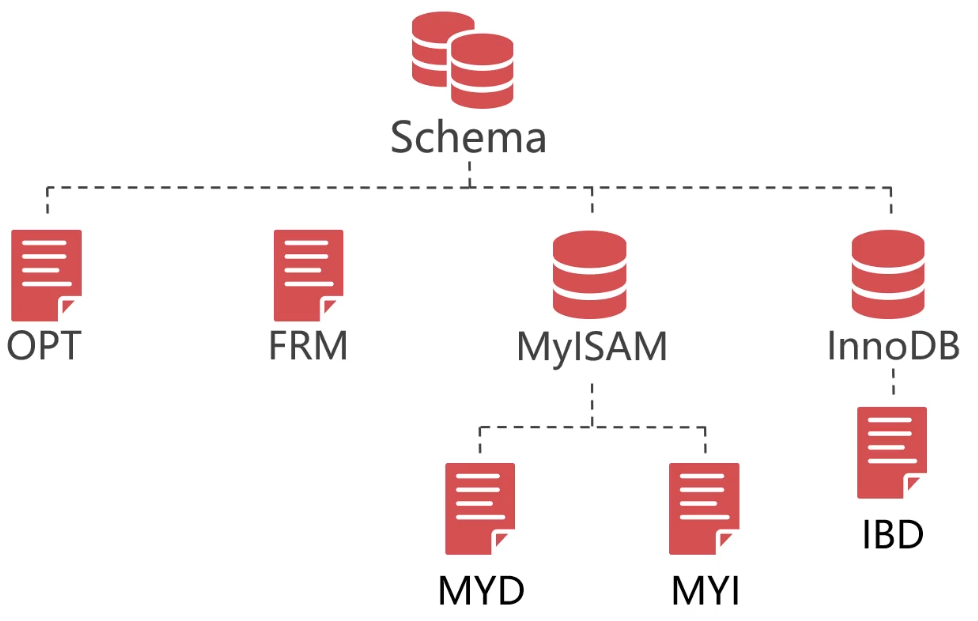 Other files in MySQL:

What are the fragments in the data file:

There has always been a problem of data file fragmentation in MySQL. The reason why MySQL does not automatically defragment and reduce the volume of data files is that the defragmentation process locks tables. If every data is deleted and the table is locked for defragmentation, the reading and writing of the data table will be greatly affected. However, when MySQL writes new data, it will write it to the debris space first, so the debris space in the data file has no impact on daily operation.

The SQL statements for defragmenting data files in MySQL are as follows:

It should be noted that before executing the SQL, you should first turn off the binlog of the database node used for backup. Avoid that the SQL is recorded in binlog, which results in the situation that other nodes synchronize the SQL to lock the whole cluster after the node backup is completed and restored to the cluster. Therefore, you need to comment out the following two parameters in the MySQL configuration file and open it after the backup is completed:

After introducing some previous knowledge, this section will gradually demonstrate how to practice online cold backup. I have prepared a three node system PXC cluster:

First select any node in the cluster as the backup node, and then stop the node:

Edit the configuration file and comment the binlog related parameters:

In this example, the test library is backed up, so before the backup, all the tables under the test library need to be defragmented. Because there are many tables, I have written a simple Java program to implement:

After defragmentation, stop the MySQL service, because the cold backup needs to be stopped:

Then you can start the backup. In fact, the process of backup is very simple. No special technology is used. Just use the tar command to make a MySQL data directory into a compressed package. For example, the data directory here is / var/lib/mysql, so the executed command is as follows:

If you create a table partition and map it to another directory, you also need to package the table partition. For example, I have two table partitions mapped to the directory / mnt/p0/data / and / mnt/p1/data / respectively, so the executed commands are as follows:

After demonstrating how to cold back up, the next step is to demonstrate how to cold restore the backup files to other PXC nodes. First, transfer the backup file to the node to be restored. You can use the scp or rsync command to transfer files between Linux systems, as shown in the following example:

The backup files received by the restore node are as follows:

In addition, some preparations need to be done, because the backup node has table partition, and the corresponding data directory is mapped. If the restore node does not exist, it needs to be created. Here is an example:

Because it is a cold restore, you need to stop the restore node as well as a cold backup:

Restore the MySQL data directory with the following commands:

Delete the auto.cnf file. Otherwise, if uuid is repeated, the node cannot be started:

If you use the first node in the PXC cluster as the backup node, you need to change the safe_to_bootstrap parameter in the grestate.dat file to 0, which is not required for normal nodes. Here is an example:

Even after the restore is completed, start the MySQL service:

The rest is to verify whether the data of this node is restored correctly and whether it can synchronize with other nodes in the cluster. And finally clean up the old data directory that was backed up before:

Practical use of cold backup:

After the above sections, now that we have learned about cold backup and cold restore, let's learn about hot backup from this section. Hot backup is not only the backup of data in the running state of database, but also the most difficult backup. There are two common hot backup schemes for PXC cluster, LVM and XtraBackup.

LVM can not only back up MySQL, but also other databases such as MongoDB. However, it is also troublesome to use LVM as a hot backup scheme. Because it is necessary to manually create logical volumes, migrate data directories, create snapshots and lock databases, LVM is not a commonly used hot backup scheme.

Because of LVM's troubles, people want to use professional tools to do hot backup, which is XtraBackup. XtraBackup is a free database hot backup tool open-source by Percona. It can backup InnoDB database and xtrabb storage engine database non blocking. Because XtraBackup does not interrupt the executing transaction during the backup process, and the transaction log records which data is written before the backup and which is written after the backup, there is no need to lock.

In addition, XtraBackup provides the compression function of backup data, which can save the disk space and network bandwidth occupied by backup files. However, XtraBackup will add a read lock when backing up a table using MyISAM as the storage engine, that is, the data in the table is readable but not writable, but this is not a problem. As mentioned before, online hot backup can be used to solve the problem of adding a read lock. Similarly, XtraBackup supports full backup and incremental backup. Because of the convenience of XtraBackup, XtraBackup is generally used for hot backup.

Here is an example. First, write a shell script to perform full hot backup as follows:

Give the script permission to execute:

Finally, configure crontab. For example, I define to execute at one o'clock every week, so as to realize scheduled full hot backup:

After the introduction of full hot backup, let's take a look at how to restore the files backed up by XtraBackup. In restore, only cold restore can be used, and there is no hot restore. Because online restore operation is carried out for a running database, and users are reading and writing data at the same time, it may lead to data coverage and data confusion.

Therefore, restoring can only be a cold restore, which has been introduced before. However, using XtraBackup for cold restore will be simpler and not as troublesome as restoring a cold backup.

First, shut down the MySQL service:

The backup files are compressed, so you need to create a temporary directory to store the extracted files:

Then use the xbstream command to extract the backup file to the directory:

After completing the above steps, you can restore the backup file using the following command:

Then give mysql user permission to the restored directory file:

So far, the cold restore is completed. Finally, start the MySQL service and verify whether the following data is normal:

In the previous demonstration of cold restore, the full backup files have been compressed and decrypted, so take / home/backup/temp / backup directory as an example, and the incremental hot backup command is as follows:

The file directory for incremental backup is as follows:

You can use the du command to compare the directory sizes of full hot backup and incremental hot backup:

If you need to use streaming compression and content encryption for incremental backups, add the relevant parameters. Here is an example:

Generally, we will make incremental hot backup automatically as a scheduled task, so as to avoid manual fixed-point operation and save unnecessary workload. In full hot backup, the crontab command of Linux is used to realize the timing execution of shell script, and some mainstream programming languages also have the framework or class library to realize the timing task.

Because Quartz is a little more complex, Spring is the example for simplicity. First, create a Spring Boot project. The dependencies in pom.xml are as follows:

Then write a Java class to implement incremental hot backup on a regular basis:

After the above code is written, use maven to print the project into a jar package, then upload the jar package to Linux, and execute it with the Java jar command. As follows:

The log information output during execution is as follows:

After the backup, you can see that the content of the increment-backup.cnf file has also been updated:

So far, we have implemented the timed incremental hot backup database using Java language. The reason why this paper introduces how to use programming language is that there may be some more complex or personalized requirements in actual enterprise applications, which can not be realized by using shell script alone. For example, it is required to send an email or SMS to inform relevant personnel after the backup is completed, or it is required to control the interval time of scheduled execution on the UI, etc. This kind of requirement can only be realized by using programming language to customize development.

Next, perform incremental cold restore. Here are three backup point directories corresponding to the above figure:

Because it is a cold restore, you must first shut down the MySQL service:

In this example, the data of "incremental backup 2" is to be restored. According to the previous instructions, first process the transaction log of the full backup point, and execute the following command:

After completing the above steps, you can use the following command to restore the backup file:

Then give mysql user permission to the restored directory file:

So far, the restore is completed. Finally, start the MySQL service and verify whether the following data is normal: