Because in practical problems, a group of data often has many different data types. For example, to register student information, you may need to use char type name, int type or char type student number, int type age, char type gender, and float type grade. For another example, for recording a book, you need a book title of char type, an author name of char type, and a price of float type. In these cases, it is difficult to use simple basic data types or even arrays. The structure (similar to the "record" in Pascal) can effectively solve this problem.

Structure is essentially a data type, but it can include several "members". The type of each member can be the same or different, basic data type or another construction type.

The structure can not only record different types of data, but also make the data structure "high cohesion and low coupling", which is more conducive to the reading, understanding and transplantation of programs. Moreover, the storage mode of the structure can improve the access speed of CPU to memory.

Structure declaration   It is the main method to describe how structures are combined.
The general form is:

The struct keyword indicates that next is a structure.
For example, state the structure of a student:

The above declaration describes a structure containing three different types of members, but it has not yet created an actual data object.

Each member variable is described with its own declaration, ending with a semicolon.

A semicolon after curly braces indicates the end of the structure declaration.

The structure declaration can be placed outside the function (at this time, it is a global structure, similar to a global variable, and all functions declared after it can be used)

Type of structure member     It can be variables, arrays, pointers, or even other structures

2, Definition and initialization of structure variables

The general form is: 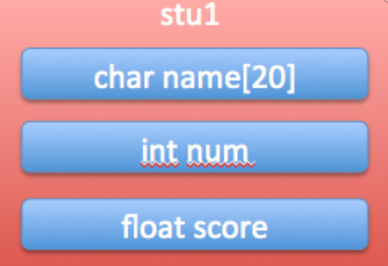 3. You can also use anonymous structs to define struct variables:

However, it should be noted that although this method is simple, it can not define new structure variables again

1. Define variables and assign initial values at the same time

two   Assign an overall value to the structure

three   You can assign values to the members of the structure one by one:

We can see that s has member name and age

Sometimes what we get is not a structure variable, but a pointer to a structure.

Which of the print1 and print2 functions above is better?

The answer is: the print2 function is preferred.

When a function passes parameters, the parameters need to be pressed on the stack.

If the structure is too large when passing a structure object, the system overhead of parameter stack pressing is relatively large, which will lead to performance degradation