By converting one interface to another that the customer wants, the adapter pattern allows classes that are incompatible with the interface to work together, alias wrappers

Adapter: the adapter class can call another interface as a converter to adapt the Adaptee and Target. The adapter class is the core of the adapter pattern. In the object adapter, it connects the two by inheriting the Target and associating an Adaptee object

Use example of interface adapter mode

Considerations and details of adapter mode 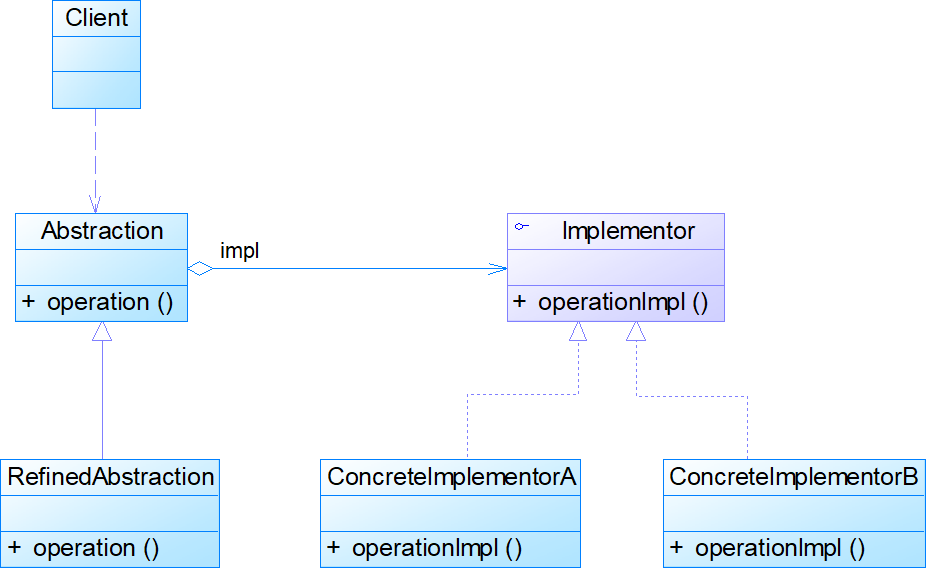 Now you can implement operation programming for different brands of different mobile phone types (for example:
Power on, power off, surfing the Internet, making phone calls, etc.),
As shown in the figure: 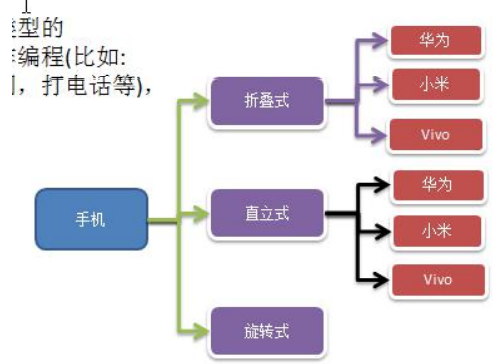 Using bridge mode to improve the traditional way, make the program have good expansibility, and use program maintenance 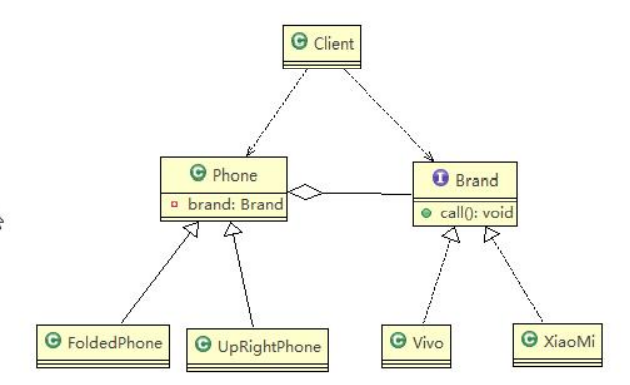 Precautions and details of bridging mode

Bridge mode can be used when:

Bridge mode and other application scenarios

The combination mode combines objects according to the tree structure, which is used to represent the partial and overall levels. 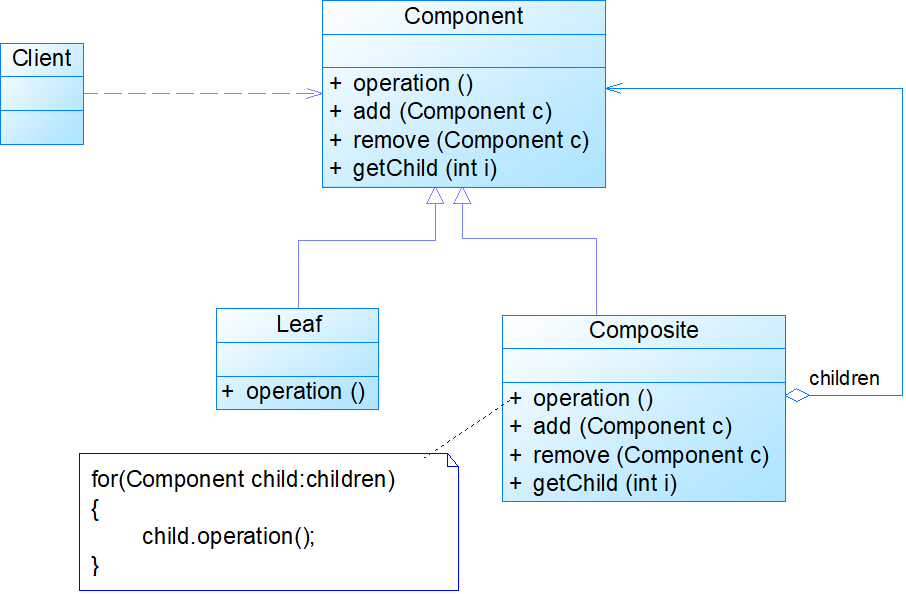 Use examples of composite mode

Write a program to display the department structure of a school: the demand is that the Department composition of the school should be displayed on one page. A school has multiple colleges and a college has multiple departments. 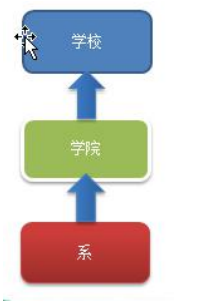 At the same time, an aggregation association relationship is established between the container object and the abstract component class. The container object can contain both leaves and containers, so as to realize recursive combination and form a tree structure.

If the composite mode is not used, the client code will rely too much on the complex internal implementation structure of the container object. The change of the internal implementation structure of the container object will cause frequent changes of the client code, resulting in the disadvantages of complex code maintenance and poor scalability. The introduction of combination mode will solve these problems to a certain extent.

Notes and details of combination mode

Combination mode can be used in the following cases:

Dynamically attach new functions to objects. In terms of object function extension, it is more important than inheritance
It is flexible, and the decorator mode also embodies the principle of opening and closing (ocp)

The decorator uses the association relationship between objects to replace the inheritance relationship between classes. In the decorator, you can not only call the methods of the original class, but also add new methods to expand the functions of the original class. It dynamically adds responsibilities to objects without defining subclasses, which is in line with the principle of composition and reuse. 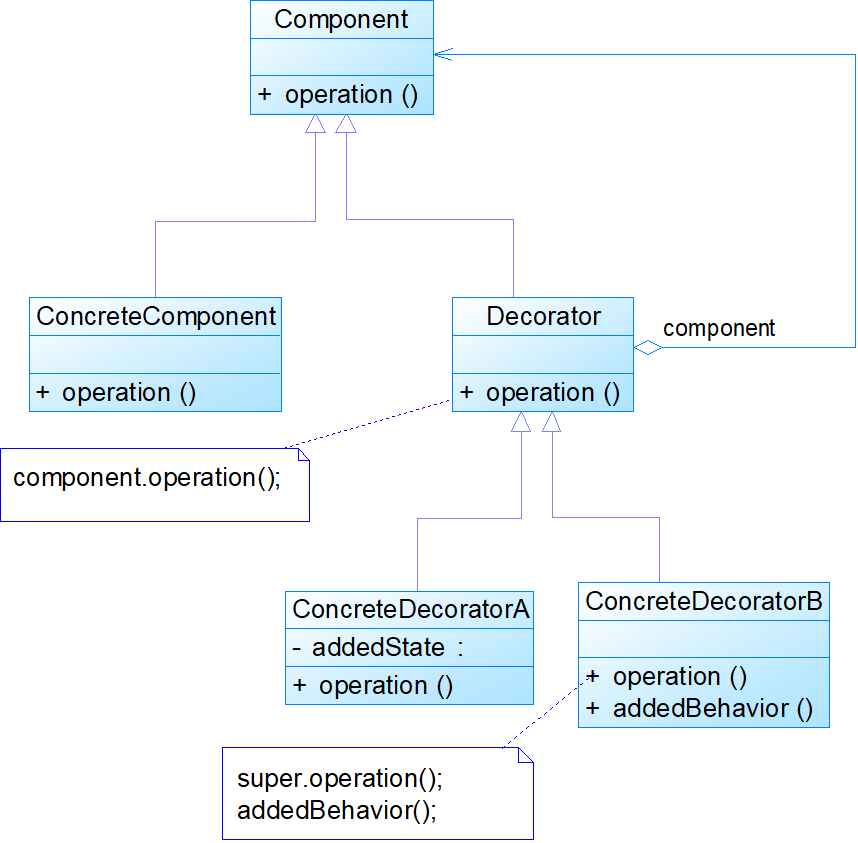 Use examples of decoration mode 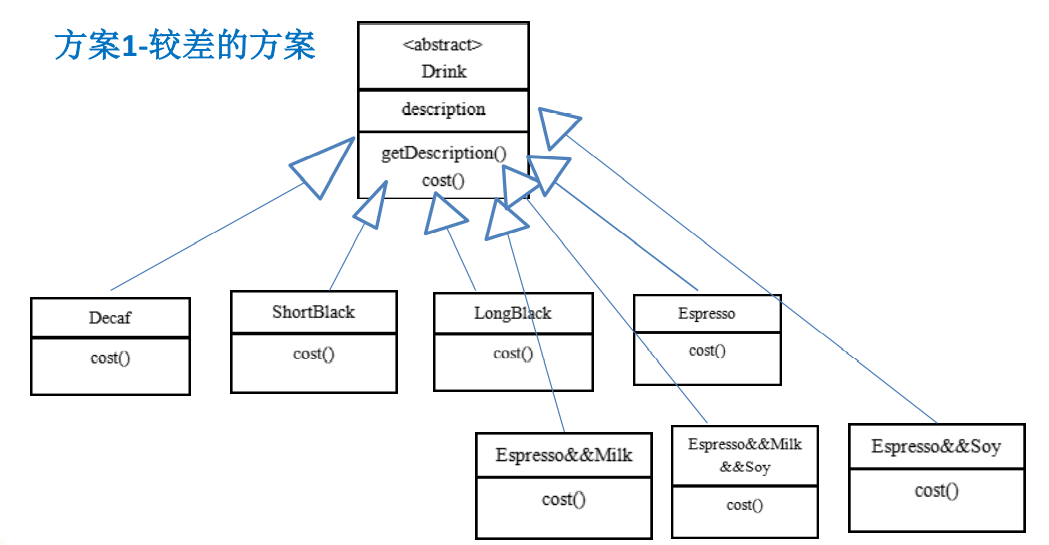 Scheme II
According to the previous analysis, in scheme 1, because the combination of coffee single product and seasoning will double the number of classes, improvements can be made to build seasonings into the Drink class, so as not to cause too many classes. So as to improve the quality of the project
Maintainability of (as shown in the figure) 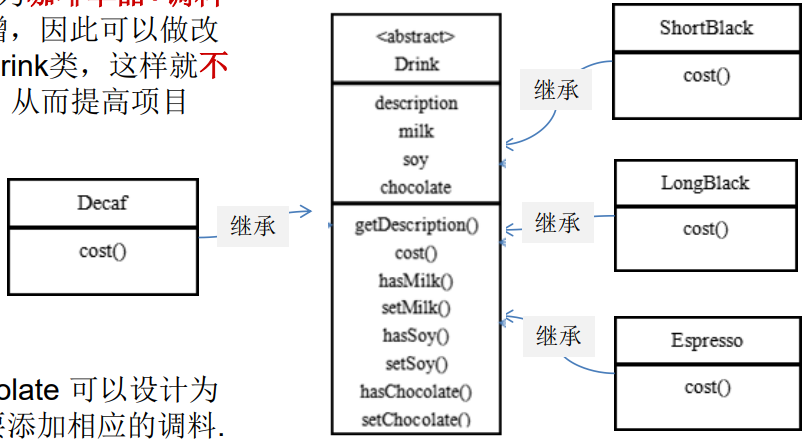 Source code analysis of decorator mode in JDK application
The IO structure of Java, FilterInputStream, is a decorator

Because both concrete component classes and decoration classes implement the same abstract component interface, the client will not feel that the object is different before and after decoration. Decoration mode can expand the function of the object without creating more subclasses

Add responsibilities to a single object in a dynamic and transparent manner without affecting other objects.
When the system cannot be extended by inheritance or inheritance is not conducive to system expansion and maintenance, decoration mode can be used. There are two main types of situations where inheritance cannot be used: the first is that there are a large number of independent extensions in the system. In order to support each extension or combination of extensions, a large number of subclasses will be generated, resulting in an explosive increase in the number of subclasses; the second is that Class is because the class is defined as not inheritable

Appearance mode provides a consistent interface for a group of interfaces in the subsystem. This mode defines a high-level interface, which makes the subsystem easier to use 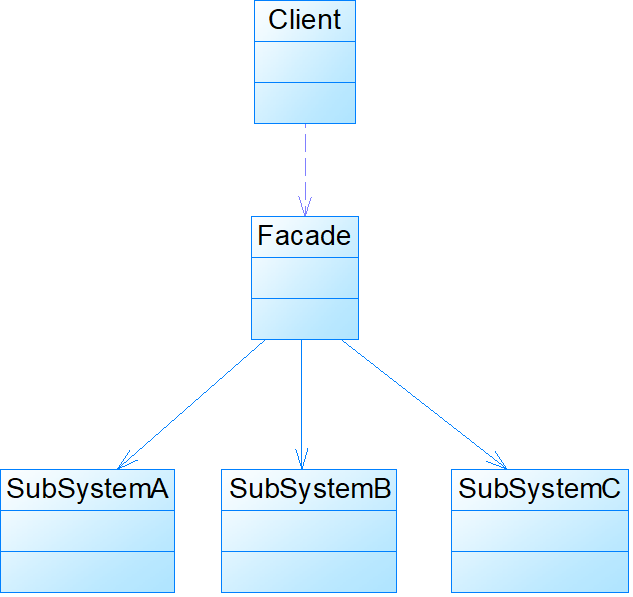 Set up a home theater:
DVD player, projector, automatic screen, surround sound and popcorn machine are required to complete the use of home theater
Function, the process is:
• direct remote control: coordinate the switch of each equipment
• popcorn opener
• drop the screen
• turn on the projector
• turn on the audio
• open DVD, select DVD
• get popcorn
• dim the lights
• play
• after viewing, turn off various equipment 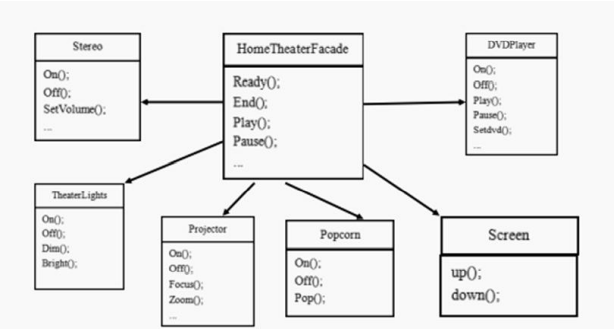 Precautions and details of appearance mode

Appearance mode can be used when:

Sharing technology is used to effectively support the reuse of a large number of fine-grained objects. The system only uses a small number of objects, and these objects are very similar, the state change is very small, and the multiple reuse of objects can be realized.

The meta pattern is generally used in combination with the factory pattern, and a meta factory class is included in its structure diagram 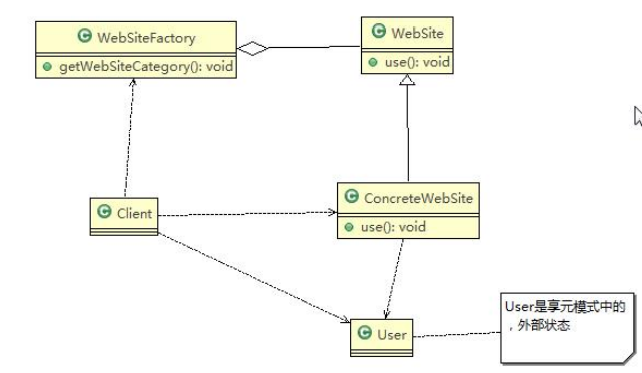 Notes and details of sharing mode

Provide a proxy to an object, and the proxy object controls the reference to the original object.

The agent mode has different forms, mainly including three kinds of static agent, dynamic agent (JDK agent and interface agent)
Management) and Cglib agent (it can dynamically create objects in memory without implementing interfaces. It belongs to the category of dynamic agent).

For some reasons, the client does not want or cannot access an object directly. In this case, it can achieve indirect access through a third party called "proxy" 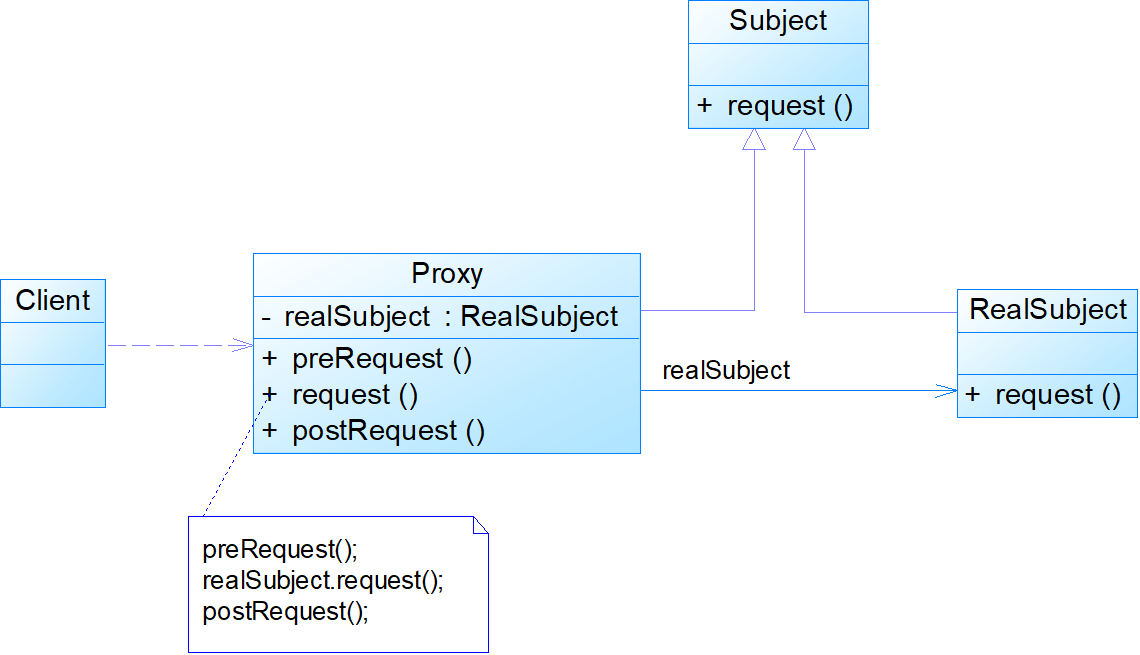 Advantages and disadvantages of static agent

Use examples of dynamic agents 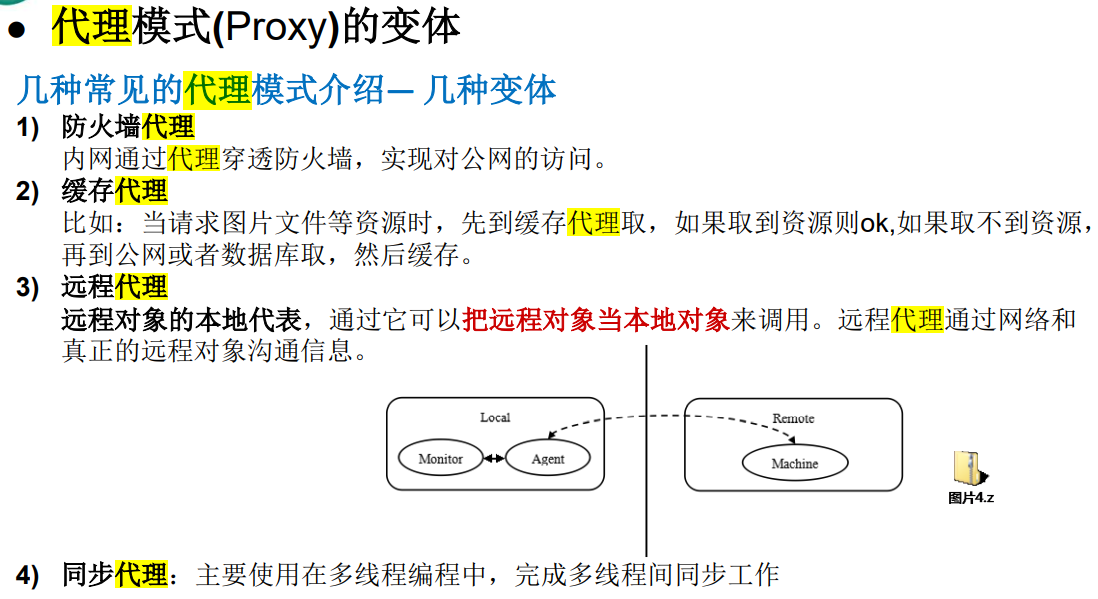 Advantages and disadvantages of static agent