Process: refers to an application running in memory. Each process has an independent memory space. Process is also an execution process of the program and the basic unit of the system running the program.

Thread: it is a single sequential control flow in a process and an execution path

Process is the smallest unit of operating system scheduling and resource allocation, and thread is the smallest unit of CPU scheduling. Memory is not shared between different processes. The cost of data exchange and communication between processes is very high. Different threads share the memory of the same process. Of course, different threads also have their own independent memory space. For the method area, the memory of the same object in the heap can be shared between threads, but the local variables of the stack are always independent.

Java uses the java.lang.Thread class to represent threads. All Thread objects must be instances of the Thread class or its subclasses. The role of Thread is to complete certain tasks. In fact, it is to execute a program flow, that is, a piece of code executed in sequence. Java uses Thread executors to represent this program flow. The steps to create and start a multithread by inheriting the Thread class in Java are as follows:

The difference between the run() method and the start() method

Note: a custom thread object is a thread, that is, an execution path

The steps are as follows:

There is a thread that runs in the background. Its task is to provide services for other threads. This thread is called "guard thread". The garbage collection thread of the JVM is a typical daemon thread. A feature of daemon threads is that if all non daemon threads die, the daemon thread will die automatically. 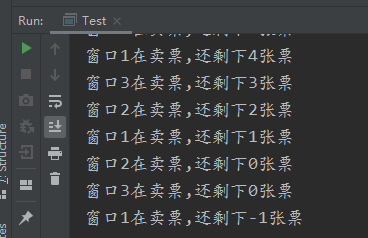 Through the implementation results, we found that

In order to ensure that each thread can normally perform atomic operations, Java introduces thread synchronization mechanism. Note: at most one thread is allowed to have a synchronization lock at any time. Whoever gets the lock will enter the code block, and other threads can only wait outside (BLOCKED).

Advantages and disadvantages of synchronization

The synchronized keyword can be used in front of a block to indicate that mutually exclusive access is only implemented to the resources of the block.

What is the synchronization lock object?

The synchronized keyword directly modifies a method, indicating that only one thread can enter the method at the same time, and other threads are waiting outside.

Synchronization method: add the synchronized keyword to the method. The format is as follows:

Thread deadlock refers to that two or more threads hold the resources required by each other, resulting in these threads being in a waiting state and unable to execute

Under what circumstances will deadlock occur