The difference between object oriented and process oriented

Object oriented still includes process oriented, but the focus has changed and who will do it

Relationship between classes and objects

Class is a general term used to describe a class of things with common attributes and behaviors. Therefore, in fact, classes do not exist in the objective world. They are abstract and are only used to describe data information.

An object is an instance of a class, which exists concretely, can be seen and touched, and has the properties and behavior of such things

Relationship between classes and objects

A class of things in the real world:

The same is true for describing things with class in Java:

Define class: defines the members of a class, including member variables and member methods.

Member variables: almost the same as previously defined variables. It's just that the location has changed. In a class, outside a method.

Member method: similar to the format of the main method written before. But the functions and forms are richer. In a class, outside a method.

The steps for Java custom classes are generally as follows:

Instantiation of a java class, that is, the object that creates the class. The format is as follows

Now let's create the object of the Student class

One of the members of the class: member variables (properties)

Difference between member variable (attribute) and local variable   There are many, mainly the following points

How to declare member variables

For example: declare a Chinese class

Method: organize the code blocks with independent functions into a whole and make them have a code set with special functions. Methods in Java cannot exist independently. All methods must be defined in classes.

How to declare methods

How to call methods in other classes

Method overloading: more than one method with the same name is allowed in the same class, as long as their parameter lists are different, regardless of modifiers and return value types.

What are the different parameter lists in method overloading

What factors are independent of method overloading

Overloaded method call: the JVM calls different methods through the parameter list of the method.

Memory is one of the important components of a computer. It is a bridge to communicate with the CPU. Its function is to temporarily store the operation data in the CPU and the data exchanged with external memory such as hard disk. As long as the computer is running, the CPU will transfer the data to be calculated to the memory for operation. When the operation is completed, the CPU will transmit the results. The program we write It is stored in the hard disk. The program in the hard disk will not run. It must be put into the memory to run, and the memory will be emptied after running. In order to run the program, the Java virtual machine must allocate and manage the memory space, and each area has a specific data processing method and memory management method. 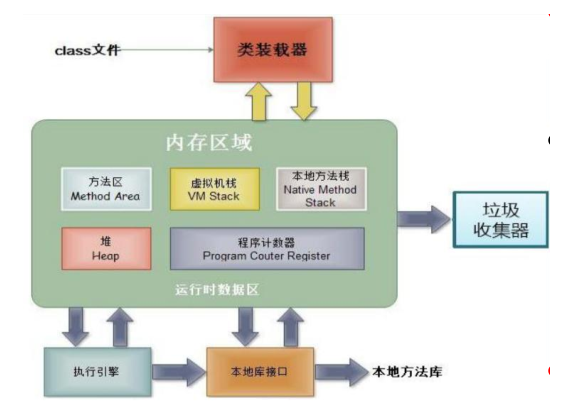 Memory analysis: as shown in the following figure