Graph - graph G is composed of two sets V(G) and E(G), marked as G=(V,E), where V(G) is a non empty finite set of vertices,   E(G) is a finite set of edges, and edges are disordered or ordered pairs of vertices.

If E is a finite set of undirected edges, then graph G is an undirected graph. Edges are undirected pairs of vertices, denoted as (V, w) or (W, v), where V, w ∈ v

A graph G is called a simple graph if it satisfies that there are no repeated edges and rings.

9) Vertex degrees, in degrees and out degrees

In a graph, each edge can be marked with a value with some meaning, which is called the weight of the edge. This kind of graph with weight on the edge is called weighted graph, also known as net.

A path from vertex Vp to Vq refers to the vertex sequence Vp, Vi1, Vi2,..., Vim, Vq. The number of edges on the path is called the path length. The same path between the first vertex and the last vertex is called a loop or ring. If a graph has n vertices and more than n-1 edges, the graph must have a ring.

If the shortest path from vertex u to vertex v exists, the length of this path is called the distance from u to v

The adjacency matrix of an undirected graph must be symmetric and unique, so only the upper (lower) triangle needs to be stored in the actual storage

For an undirected graph, the number of non-zero elements in row i of the adjacency matrix is exactly the degree of vertex i

Let the adjacency matrix of graph G be A,

The non-zero element of is equal to the number of paths with length n from vertex i to vertex j.

The storage space of undirected graph is

, the storage space of digraph is

In the adjacency table of a directed graph, to find the penetration of a point, you need to traverse the whole edge set, use a cross linked list, and increase the head field to connect the edges with the same arc head.

In the adjacency table of undirected graph, the same edge is stored twice, and the adjacency multiple table is used to increase jlink to point to the next edge attached to vertex j.

When using adjacency table storage, each vertex needs to be searched once. When searching the temporary contact of any vertex, each edge is accessed at least once, and the time complexity is

When using adjacency matrix storage, the time complexity is

First access the starting vertex v, then start from V to access any vertex w1 adjacent to V and not accessed, and then access any vertex w2 adjacent to w1 and not accessed, and repeat the above process. When the downward access can no longer be continued, it will return to the recently accessed vertex in turn. If it has adjacent vertices that have not been accessed, it will continue the above search process from this point until all vertices are accessed.

When using adjacency table storage, each vertex needs to be searched once. When searching the temporary contact of any vertex, each edge is accessed at least once, and the time complexity is

When using adjacency matrix storage, the time complexity is

Let G=(V, GE) be a connected network with n vertices, and T=(U, TE) be a spanning tree.

Select one of the edges (u,v) with the smallest weight, which may be set to (u,v); 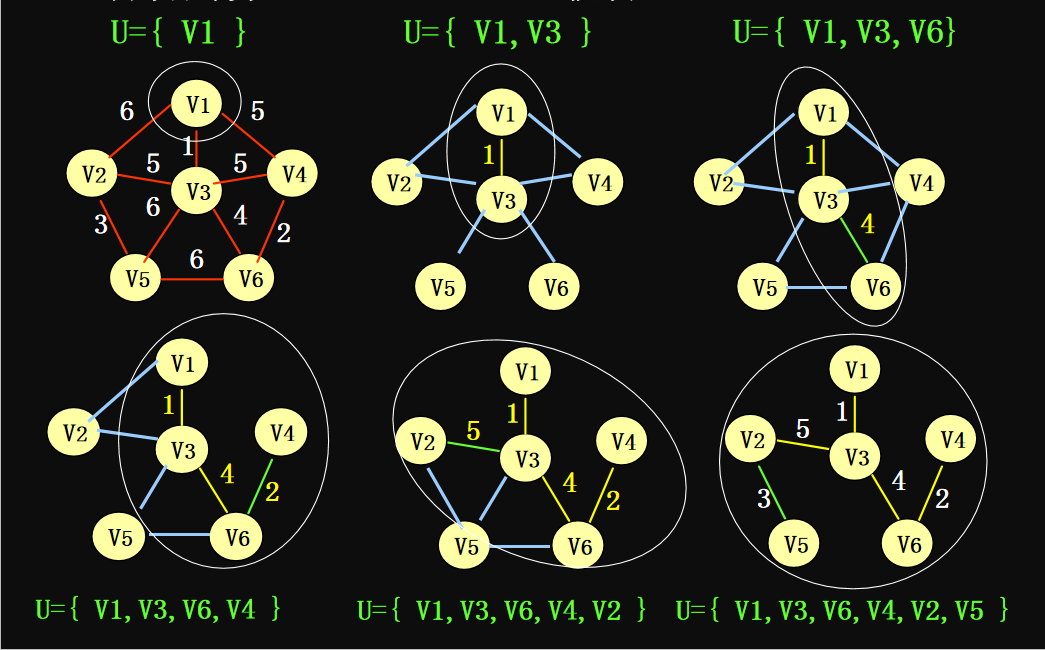 The time complexity of Prim algorithm is

, independent of | E |, it is suitable for solving the minimum spanning tree of edge dense graphs.

① Initially, the minimum spanning tree contains only n vertices of the graph, and each vertex is a subtree (forming a connected component);

② Select the edge whose weight is small and the associated two vertices are not in the same connected component, and add this edge to the minimum spanning tree;

When Kruskal algorithm uses heap to store the set of edges, the time complexity is

Therefore, Kruskal algorithm is suitable for graphs with sparse edges and many vertices.

1) For unauthorized graphs, you can use breadth first search to find the shortest path

Auxiliary set S: at the beginning of the vertex set for which the shortest path has been obtained, S={V0}

There is no arc between V0 and K: Dist[k] = infinite

②   Among all arcs starting from the source point, select an arc with the smallest weight, that is, the first shortest path.

③ Modify the Dist[k] values of other vertices whose shortest path has not been determined in turn.

It is worth noting that Dijkstra algorithm is not applicable when the edge has negative weight.

3) Floyd algorithm for the shortest path between vertices

① Initially, set an n-order square matrix so that its diagonal element is 0. If there is an arc < VI, VJ >, the corresponding element is the weight; Otherwise ∞.

③ All vertex probes are completed and the algorithm ends. 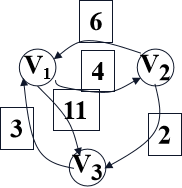 If there is no ring in a directed graph, it is called directed acyclic graph, or DAG graph for short

(2) Each node has an identifier table (can be empty);

Perform the following steps for each quaternion in the basic block 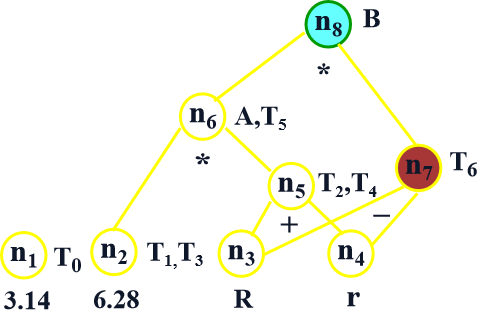 Topological sorting: the process of arranging the vertices in the AOV network into a linear sequence according to their priority relationship.

Select a vertex without a precursor in a directed graph and output it.

Delete the vertex and all arcs ending in it from the graph.

Repeat the above two steps until all vertices have been output; Or when there is no Vertex without precursor in the graph.

The formula for calculating the occurrence time of activity (ARC) assumes that the i-th arc is < J, k >, then it is applicable to the i-th activity

Find the ve of vertices according to the order of AOE network topology sequence; Find the vl of vertices in the order of inverse topological sequence; e[k] and l[k] of each activity are calculated by ve and vl; Find out the key activities of e[k]==l[k]

(1) If it is an Euler graph, the Euler loop is the shortest delivery route

(2) Otherwise, there are even odd vertices in the graph, so you only need to repeat the shortest path between each pair of odd vertices.