Given a positive integer n, find a non negative integer less than or equal to n whose binary representation does not contain   Continuous 1   Number of.

Set an array: expressed by f(i) as the number of binary numbers (range i 0~~i 1) with length i without continuous 1 (similar to Fibonacci sequence)

It can be observed that:

Start to convert a number into binary and scan from the most significant bit (left - > right). Whenever a 1 is encountered, i.e. (1 *****, there are k binary bits after 1, and each * can be 1 or 0), f(k) needs to be increased to meet the total number count of binary numbers without continuous 1, because we can put a '0' on this number, Any string with a valid len gt h of K is placed after it; After that, we continue to cycle through the rest of the situation, that is, we put a '1' on this digit. If we find a continuous 1, we exit the loop and return the answer. At the end of the loop, we return count+1, including the number n itself.

The next operation needs to transform the binary number 1001011x, but 1001011x has a continuous 1, which is illegal, so it does not enter the count. 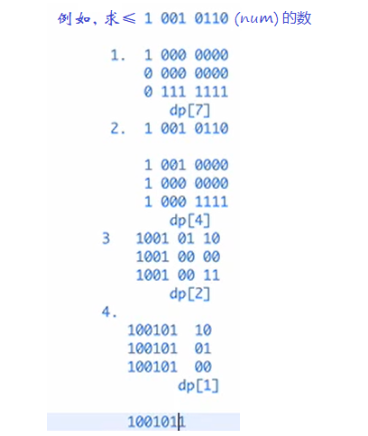 (here, binary numbers are converted into strings, and 32 length strings are used to store the values of Fibonacci sequence, which consumes too much memory)

Second Edition: write a function to find each value of Fibonacci sequence, and use variable k to represent the binary digits after significant digit 1