Space complexity: it is a measure of the amount of storage space temporarily occupied by an algorithm during operation;

In general, the number of times the basic operation is repeated in the algorithm is a function of the problem scale n, expressed by T(n). If there is an auxiliary function f(n), so that when n approaches infinity, the limit value of T(n) / f(n) is a constant that is not equal to zero, then f(n) is a function of the same order of magnitude of T(n). Note that T(n)=O(f(n)), O(f(n)) is the asymptotic time complexity of the algorithm, which is called time complexity for short. 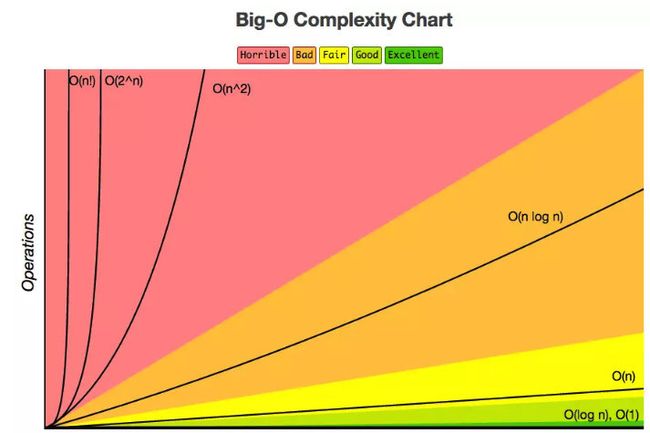 The notation of using O() to reflect the time complexity of the algorithm is called large o representation.

1. Replace all addition constants in the running time with constant 1.

2. In the modified run times function, only the highest order term is retained

3. Remove the constant multiplied by the highest term, and the result is large O-order.

The spatial complexity of a program refers to the amount of memory required to run a program. Using the spatial complexity of the program, we can estimate in advance the amount of memory required for the operation of the program. When a program is executed, in addition to the storage space and the instructions, constants, variables and input data used to store itself, it also needs some work orders to operate the data Meta and auxiliary space for storing some information required for real-world calculation. The storage space required for program execution includes the following two parts.

(1) Fixed part: the size of this part of space is independent of the number and value of input / output data, mainly including the space occupied by instruction space (i.e. code space) and data space (constants and simple variables). This part belongs to static space.

Generally speaking, as long as the algorithm does not involve the dynamically allocated space and the space required by recursion and stack, the space complexity is usually 0 (1).

In the worst case, the binary search is n/2,n/4,n/8 until 1.
Suppose it is x times, and then we can observe that the denominator is multiplied by 1 / 2 every time, and the numerator remains unchanged, so we can list the following equation:

It is calculated that x=log2N, that is, the time complexity is O(log2N);