Encoding method of bytecode to text

In the computer, whether memory, disk or network transmission, the data involved are stored or transmitted in binary format.

Bytecode cannot be directly converted to printable text characters. Sometimes you want to configure, store and transmit a section of binary bytecode through text, such as configuration file, HTML/XML, URL, e-mail body, HTTP Header and other scenarios that only support text, you need to convert the binary byte code into text string.

There are many ways to convert binary bytecode to text characters. The simplest way is to use 0 and 1 directly. But in this case, only 8 0 / 1 characters can represent 1 byte, and the length is too long, which is very inconvenient.

HEX is a hexadecimal encoding method, so it is also called Base16.

If the binary value in a byte is converted to hexadecimal and the 16 characters 0-9 and a-e (ignoring case) are used, each character can represent four binary bits (because the fourth power of 2 is equal to 16), so only two printable characters are required to represent a byte.

RGB refers to the three primary colors of red, green and blue. After the three colors are superimposed in different proportions, various colors can be obtained. The value range of each intensity of the three colors is 0 ~ 255, which requires 1 byte each, a total of 3 bytes.

HEX encoded indicates a certain RGB color. It is a string with a length of 6 bits (usually prefixed with # and the length is 7 bits). For example, #FF4500 indicates that the intensities of the three primary colors of red, green and blue are 255, 69 and 0 respectively.

Since only letters, numbers and some special symbols are allowed in the URL, when there are Chinese characters in the URL, it needs to be encoded by the URL.

For example, the page URL of Baidu Encyclopedia "relativity" is: https://baike.baidu.com/item/...

Among them,% E7%9B%B8%E5%AF%B9%E8%AE%BA is actually the result of encoding the three words' relativity 'with UTF-8 to obtain 9 bytes, and then using HEX encoding and prefixing the 9 bytes with'% '.

As the IPv4 address will soon be insufficient, IPv6 will be replaced. IPv6 uses 128 binary addresses, which are usually represented by HEX coding, for example:

If you think HEX coding is not compact enough, there is a more compact coding method: Base64 coding.

Base64 encoding uses a total of 64 characters to represent binary bits: 26 uppercase A-Z, 26 lowercase A-Z, 10 digits 0-9, and 2 special symbols + and /. This means that each character can represent 6 binary bits because 64 is equal to the 6th power of 2.

Since each byte is 8 binary bits and each character encoded by Base64 represents 6 binary bits, 3 bytes (i.e. 24 binary bits) can be rounded up , it can be encoded into 4 characters. If the number of original data bytes encoded by Base64 is not a multiple of 3, 1 or 2 bytes with a value of 0 will be added at the end, and Base64 encoding will be carried out after rounding up to a multiple of 3. After encoding, 1 or 2 = symbols will be added at the end to indicate how many bytes have been added, which will be used in decoding.

Base64 encoding in Java:

There are also many usage scenarios for Base64 encoding. For example, since the picture file is not a text file, it is impossible to write it directly into HTML, and the result of Base64 encoding is a string of text, which can be directly put into HTML:

For example, when MD5 is used to calculate the string "relativity" to obtain a 32-bit character MD5 value, it actually goes through the following three steps (the following code depends) Apache Commons Codec):

The above code is just to more clearly see the whole process of calculating the MD5 value of a string. In actual development, a more convenient API can be used to combine the above three steps into one step:

The message digest algorithm has the following characteristics:

Here are some typical usage scenarios of message summarization algorithm:

In scenarios with high security requirements, MD5 and SHA-1 are not recommended at present. SHA-2 series algorithms are mostly used now.

The full name of HMAC is hash based message authentication code, which adds a secret key to the message digest algorithm.

For example, HMAC-SHA256 adds a key to SHA-256 algorithm. The following is a code example (dependency) Apache Commons Codec):

Compared with the direct use of message summarization algorithm, the advantage of using HMAC is that it can verify the authenticity and integrity of messages.

As long as the key is not compromised, only holding the key can calculate and verify the original data hash value. Without the key, the attacker cannot send forged messages or tamper with messages.

In addition, because HMAC adds a key when calculating the hash value, it is more difficult to be cracked by exhaustive method and rainbow table than using the message digest algorithm directly, and the user password is more secure after HMAC.

A typical application scenario of HMAC is JWT. The full name of JWT is JSON Web Token.

The traditional authentication method generally saves the authenticated user information on the server, while JWT directly sends the authenticated user information to the client for saving. Since JWT is saved on the client, anyone can forge or tamper with it. One way to solve this problem is that the server will use HMAC to sign the JWT token and put the signature at the end of the token Tail. The next time the client brings a JWT request, the server will verify whether the signature is correct. As long as the key is not disclosed, the authenticity and integrity of the token can be guaranteed.

Finally, these three parts are combined into JWT token s after Base64 coding: 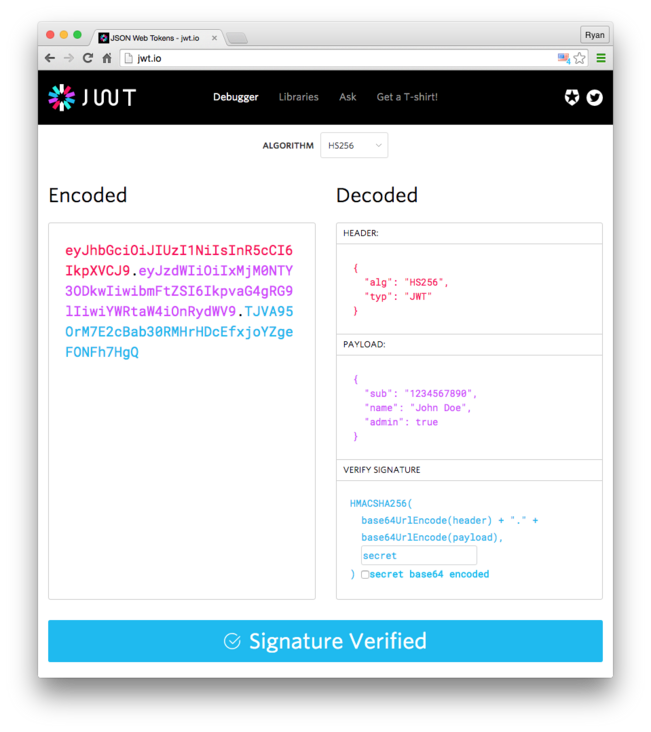 Common symmetric encryption algorithms include DES, 3DES and AES. DES and 3DES standards have been gradually replaced by AES due to security problems.

AES has many modes of operation and padding:

In actual work, it is necessary to encrypt and decrypt data across teams and languages. It often happens that one language cannot be decrypted after encryption in another language. This is generally caused by the inconsistency between the working mode and filling mode selected by both sides.

The following code takes the ECB mode combined with PKCS5Padding filling mode as an example to encrypt and decrypt the data:

Although the above ECB mode is easy to use, its security is not high. Because this mode encrypts each block independently, the same plaintext block will be encrypted into the same ciphertext block. The following figure is a good example:

In CBC mode, the concept of Initialization Vector (IV) is introduced to solve the problem of ECB mode.

The following is a code example of CBC mode combined with PKCS5Padding filling mode. During encryption and decryption, there is one more initial vector iv parameter than ECB mode:

AES is widely used. It can be said that as long as you surf the Internet, whether you use mobile APP or Web application, it is almost inseparable from AES encryption algorithm. At present, most websites, including the back-end interface of mobile APP, have used HTTPS protocol, and HTTPS mostly uses AES symmetric encryption algorithm in the data transmission stage.

The public key can be fully disclosed and can be obtained by anyone. The private key is private and must not be disclosed.

Based on the above rules, RSA has two different uses:

The private key encryption and public key decryption mentioned above are only valid in theory. In fact, they will not be used directly, but only for signature. Because a piece of data encrypted by the private key, the decrypted public key is public, which means that anyone can decrypt, so encryption has no meaning.

Next, experience the RSA algorithm through Java code.

For example, open on a browser https://xxgblog.com/ , click the small lock button on the left side of the address bar to view the certificate used by the website. Its digital signature algorithm is SHA256 with RSA: 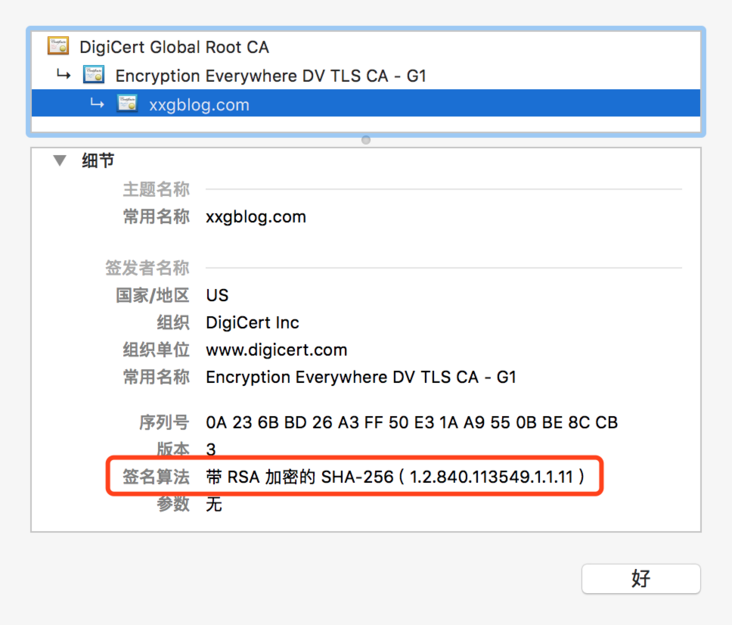