Using decision tree classification, start from the root node, test a feature of the instance, and assign the instance to its child nodes according to the test results: at this time, each child node corresponds to a value of the feature. In this way, the instance is tested and allocated recursively until it reaches the leaf node. Finally, the instance is divided into leaf node classes.

5.1.2 decision tree and if then rules

Suppose a given training data set

Feature selection is to select the features that have the ability to classify the training data. This can improve the efficiency of decision tree learning. If the result of classification using a feature is not very different from that of random classification, it is said that this feature has no classification ability. Empirically, such characteristics have little effect on the accuracy of decision tree learning. Usually, the criterion of feature selection is information gain or information gain ratio.

Generally, the logarithm in the above formula is based on 2 or e. at this time, the unit of entropy is called bit or NAT respectively. The greater the entropy, the greater the uncertainty of random variables. Verifiable from definition

Information gain representation feature X X The information of X makes the class Y Y The degree to which the uncertainty of Y's information is reduced. 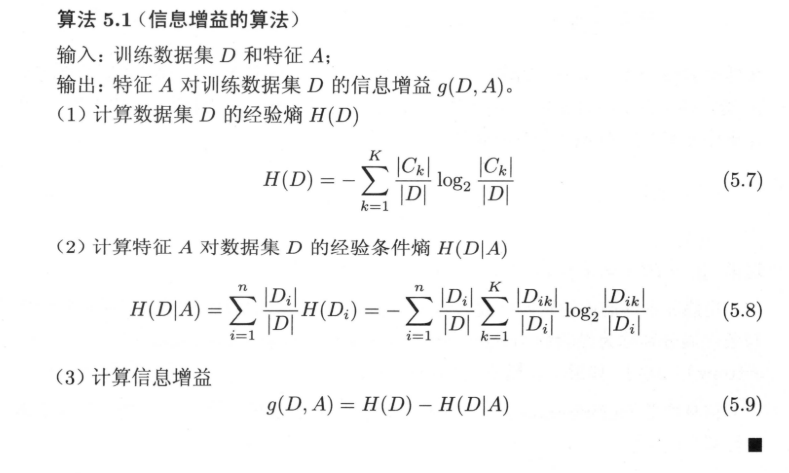 (3) Otherwise, calculate according to algorithm 5.1 A A Each feature pair in A D D D information gain, select the characteristic with the largest information gain
sign A g A_g Ag​;

(4) If A g A_g The information gain of Ag ＾ is less than the wide value ε \varepsilon ε， Then set T T T is a single node tree, and D D Maximum number of instances in D
Class of C k C_k Ck ， as the class mark of the node, returns T T T;

(5) Otherwise, yes A g A_g Every possible value of Ag + a i a_i ai, Yi A g = a i A_g =a_i Ag = ai D D D is divided into several non empty subsets D i D_i Di, will
D i D_i The class with the largest number of instances in Di ， is used as a marker to construct child nodes, which form a tree from nodes and their child nodes T T T. Return T T T;

ID3 algorithm only generates trees, so the trees generated by this algorithm are prone to over fitting. 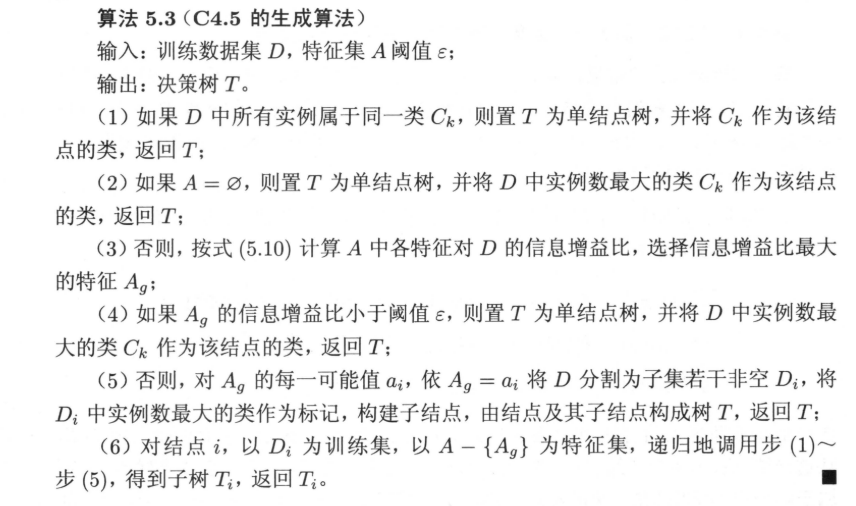 The process of simplifying the generated tree in decision tree learning is called pruning. Specifically, pruning cuts some subtrees or leaf nodes from the generated tree, and takes its root node or parent node as a new leaf node, so as to simplify the classification tree model.

In the loss function, the first term at the right end of the equation is recorded as

(1) Calculate the empirical entropy of each node.

(2) Recursively retract upward from the leaf node of the tree.

Note that the above formula only needs to consider the difference of the loss function of the two trees, and its calculation can be carried out locally. Therefore, the pruning algorithm of decision tree can be realized by a dynamic programming algorithm.

(3) Return to (2) until the position cannot be continued to obtain the subtree with the smallest loss function T α T_\alpha Tα​.

CART is a random variable at a given input X X Output random variable under X condition Y Y Learning method of conditional probability distribution of Y. CART assumes that the decision tree is a binary tree, the values of internal node characteristics are "yes" and "no", the left branch is the branch with the value of "yes", and the right branch is the branch with the value of "no". Such a decision tree is equivalent to recursively bisecting each feature, dividing the input space, that is, the feature space into finite units, and determining the predicted probability distribution on these units, that is, the conditional probability distribution output under the given input conditions.

(2) Decision tree pruning: prune the generated tree with the verification data set and select the optimal subtree. At this time, the minimum loss function is used as the standard of pruning technology.