Cause classification and solutions of memory leakage in Android

android development mainly uses java (kotlin) language, which is the language of automatic memory management. When we use an object, we will automatically allocate memory to the object. When we no longer use the object, we will automatically recycle the memory allocated to the object. However, in some cases, the memory of the object is not recycled after it is used, resulting in that this piece of memory is not used but can no longer be used.

Android's app running mechanism is that each application will be allocated a fixed upper memory limit in the running special virtual machine. When a memory leak occurs, the memory in the virtual machine can no longer be used. When the leaked memory is more and more and no longer enough for app use, it will lead to OOM (ou t of memory) and application crash, The process was killed. Because of this mechanism, after the application is killed, all memory will be released, and the unusable memory can be used again.

2. Why does memory leak occur?

Memory reclamation management strategy is to judge accessibility. When there is a reachable path between memory and GC Roots, it indicates that the current resource is being referenced and the virtual machine cannot recycle it, as shown in the Yellow node in the figure. Conversely, if there is no reachable path between the dot and GC Roots, the virtual opportunity will recycle it during GC, as shown in the blue node in the figure. 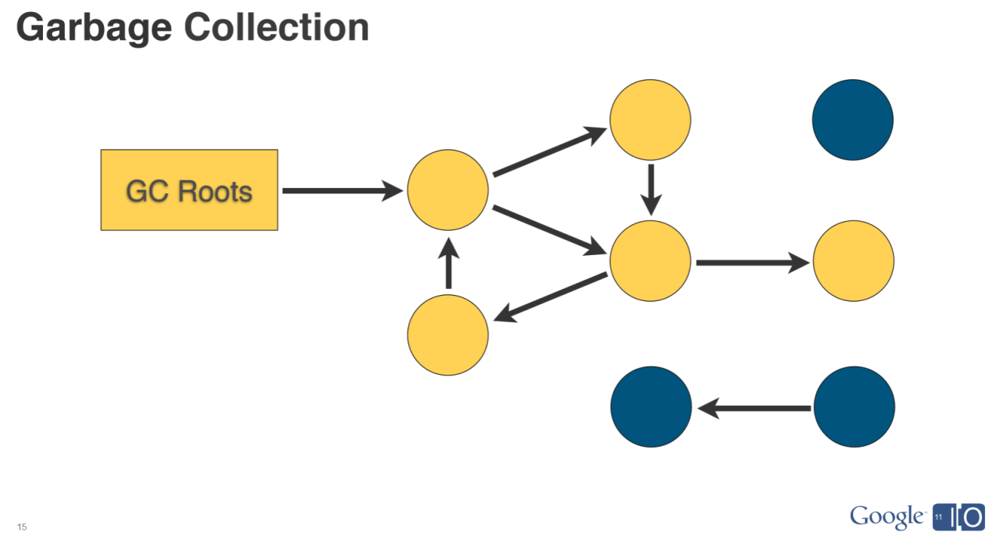 3.1.2. Save Activity reference in singleton

In single class mode, objects are also stored through static variables. If a reference to an activity is passed in, as in the previous case, memory cannot be recovered after the end of the activity life cycle, resulting in memory leakage.

The difference from the previous one is that instead of directly storing the Activity reference through the variable, it is stored in the variable object.

During View creation, a context object needs to be passed in and stored. Generally, this context is also an Activity object. If the View is stored like the above two cases, the Activity will also be leaked.

During the development process, there will be registration many times. After registration, the context will be held by the observer for a long time. If there is no de registration, it will cause memory leakage.

When we need to use system services, such as accessing some sensors, these services will run in their own threads. If we need to receive a notification at any time when an event occurs, we need to pass in the listener, so that the service will hold the reference of the Activity. If the registration is not cancelled when the Activity is destroyed, the Activity will be leaked.

3.3.2. Broadcasting is not cancelled

ValueAnimator implements an interface: AnimationFrameCallback. When calling start() to start animation, this interface will be stored in AnimationHandler, which is a single class mode.

When creating a stream, various system resources, such as file descriptor, will be used for easy access, which will not be automatically recycled by GC. close release must be called. Although there is a call in finalize(), the execution speed of this method is uncertain, and manual call is better.

The memory leak caused by webview is caused by a callback component callback passed in AwContents. Its binding and unbinding are in onAttachedToWindow and onDetachedFromWindow respectively. In onDetachedFromWindow, it will judge whether destroy() has been called for destruction. If it has been destroyed, the subsequent unbinding process cannot be performed, webview holds the activity object again, causing memory leakage.

3.7. Will bitmap not call recycle() cause memory leakage?

In versions prior to Android 3.0, bitmap was actually composed of two parts when loaded into memory. The first part contains some information about bitmap, which is stored in the memory used by Java; The second part contains pixel information (byte array), and the second part is in the memory used by C. Therefore, you need to call Bitmap.recycle() to release C memory, and then hand it over to GC to reclaim JAVA memory. Otherwise, it will cause memory leakage in the C + + part.

However, after 3.0, bitmap data will not be stored in the memory of C + +, so it is not necessary to use recycle() when freeing memory, but can be left empty and managed by GC mechanism.

In the source code of Bitmap.recycle(), there is a paragraph like this:

This is an advanced call, and normally need not be called, since the normal GC process will free up this memory when there are no more references to this bitmap.

So for now, if bitmap does not call recycle(), it will not cause memory leakage. After there is no reference to the bitmap object, it will be released by GC.

4. How to avoid memory leakage

This article is a brief summary of my learning process. I have no experience in solving the actual leakage. This document is only on paper. You are welcome to correct and supplement the mistakes and deficiencies.