In short, a process is an abstraction of resources and a container of resources. In traditional operating systems, a process is the basic unit of resource allocation and execution. Processes support concurrent execution because each process has its own data and stack space. If a program wants to execute concurrently, just start multiple processes.

Q1: how can processes execute simultaneously in a single core?

First, we should distinguish two concepts: concurrent and parallel

So it should be said that the processes are executed concurrently. For the CPU, it does not know the existence of the process. The CPU mainly deals with registers. There are some common registers, such as program counter register, which stores the address of the instruction to be executed. The CPU will go where the address of the register points to. There are also stack registers, general registers and so on. In a word, these data constitute the execution environment of a program. This execution environment is called "Context". The essence of switching between processes is to save these data to memory, the term is "save site", and then recover the execution environment of a process, that is, "recover site", the whole process The process term is called "Context switching". Specifically, it is the process Context switching, which is the essence of concurrent execution between processes - frequent process Context switching. This function is provided by the operating system. It is kernel state and transparent to application software developers.

Although the process supports concurrency, it is not very friendly to concurrency. Unfriendliness means that every process is started, a part of resources must be reallocated. Compared with the process, the cost of creating a thread is smaller than that of creating a process, so the introduction of a thread can better improve concurrency. In modern operating system, process becomes the basic unit of resource allocation, while thread becomes the basic unit of execution. Each thread has its own stack space, and all threads of the same process share code segment, address space and other shared resources. The corresponding context switch changes from process context switch to thread context switch.

3, Why introduce processes and threads

In. NET, managed threads are divided into:

The main thread (the default is the foreground thread) finishes executing, and the program exits directly.

But when the IsBackground property is changed to false, the console prints "execution complete.".

It is inconvenient to directly use Thread class for multithreading programming (the server side is more obvious), for example, chestnut.

If I write a Web server program and create a Thread for each request, I need to create a new Thread object every time, and then pass in the HttpRequest processing delegation. After processing, the Thread will be destroyed, which will waste a lot of CPU time and memory. In the early case of poor CPU performance and precious memory resources, this disadvantage will be magnified One disadvantage is not obvious. The reason is the hardware.

Where is the inconvenience?

The above code will lead to program crash, as shown below. 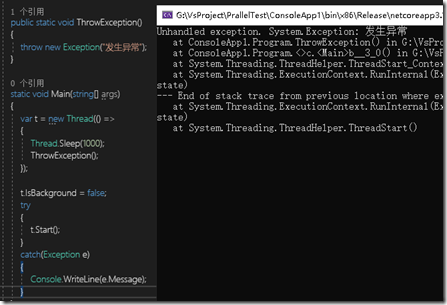 To get the return value directly and catch the uncapped exception in the thread function directly from the main thread, we can do so.

Create a new one MyTask.cs Document, as follows

With a simple packaging (don't care about the details), we can achieve the effect we want.

The test code is as follows 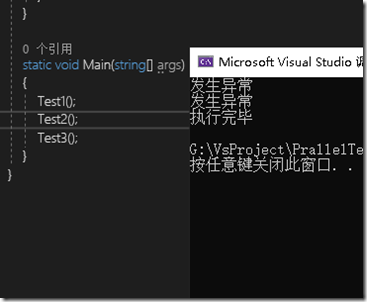 As you can see, we can simply wrap the Thread object to achieve the following effects

This is the basis of understanding and using task. Task function is very perfect, but using task well requires mastering many concepts. Let's talk about it next.