Earlier, we introduced the handshake of WebSocket: C # implements WebSocket server: (01) handshake
After the handshake is completed, both the client and the server can send and receive messages.
WebSocket messages are sent and received in frames.

There are six common frame types:

The interpretation of data format is generally quite boring. Fortunately, the data format of WebSocket frame is relatively simple. The following explains the frame data format according to my understanding.
Firstly, the frame can be divided into two parts: metadata and payload. Payload follows the metadata, and the content is determined by the metadata.

2. The second byte, expanded in bits:

4. About masks
If the frame is masked, the next four bytes are the mask value.
If there is no mask, Payload will follow.

5. For Payload length identification and mask, give a few simple examples. 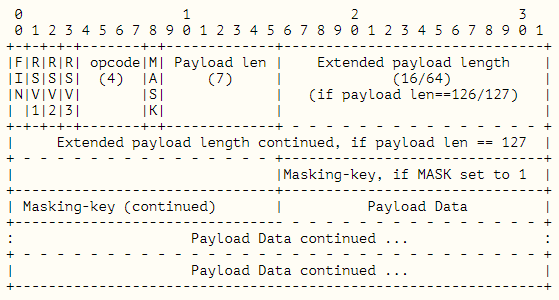 Don't say much. Go directly to the source code and parse it according to the metadata format mentioned above.
Definition and implementation of Frame class: https://github.com/hooow-does-it-work/http/blob/main/src/WebSocket/Frame.cs
At the same time, we also realize the common control frames: https://github.com/hooow-does-it-work/http/tree/main/src/WebSocket/Frames

After reading the frame metadata, call the Frame static method OpenRead to open a read stream to read the Payload.
The read Payload method here is a general method and does not analyze the Payload data of special frames (such as Close).
FrameReadStream will automatically decode the masked Payload internally.

Note: the Frame class also has a non static method OpenRead. The Stream opened here can only read the Payload of the current Frame, but cannot read the data of the Continuation Frame.

The encapsulation and parsing of frames are the opposite process. I won't talk about it specifically. We implemented a CreateMetaBytes method in the Frame class to generate metadata.
After calling the OpenWrite method of Frame, the Frame metadata will be automatically generated and written to the underlying stream. At the same time, a FrameWriteStream stream stream will be returned to write data to the Frame.

Note: FrameWriteStream does not send big data by frame, which will be implemented later.

Let's start testing our logic.
Pull our front-end test code directly from Git: https://github.com/hooow-does-it-work/http/tree/main/bin/Release/web
Before writing the test server, we had no implementation of OnWebSocket, but simply closed the flow. Now we realize the reading and writing of frames.
We set the WebRoot of the server as the web directory pulled from Git to realize the simultaneous operation of WebSocket and ordinary HTTP services.
The test server is simple and rough. It directly reads and analyzes frames from the client in a while loop. In the follow-up, it can do some encapsulation work to encapsulate the logic into a specific frame, such as reading the status code of the Close frame and the closing reason.
Test server code:

Click the connect button. After the connection is successful, the following form will be displayed.

Enter some data and click "send in text mode" and "send in binary mode" respectively to view the console output.

You can see that the service correctly parses the data sent by the browser, and the browser also displays the data returned by the server.
Click disconnect.

The server received a Close frame with a length of 0, indicating that the browser did not send the status code and reason.

The key to WebSocket is frame parsing. After fully understanding the data structure of the frame, it is actually very easy.
What we implement here is the most basic WebSocket. WebSocket actually has more functions, such as compression and other extensions.