The first part analyzes the implementation details and some difficult points of AQS sharing / exclusive lock. This part continues to analyze the remaining knowledge of AQS. Through this article, you will learn:

From the perspective of code, let's look at a section of pseudo code for locking / unlocking:

Lock is an exclusive lock. Threads A and B compete for the lock at the same time. Assuming that A successfully obtains the lock, it can execute doSometing1() and doSometing2() methods.
Thread B calls myLock.lock() because it can't get the lock. However, another thread C is waiting for thread B's data. Because thread B can't get the lock all the time, it can't produce the data required by C. Therefore, C wants to interrupt B. after B is awakened, it has two options: 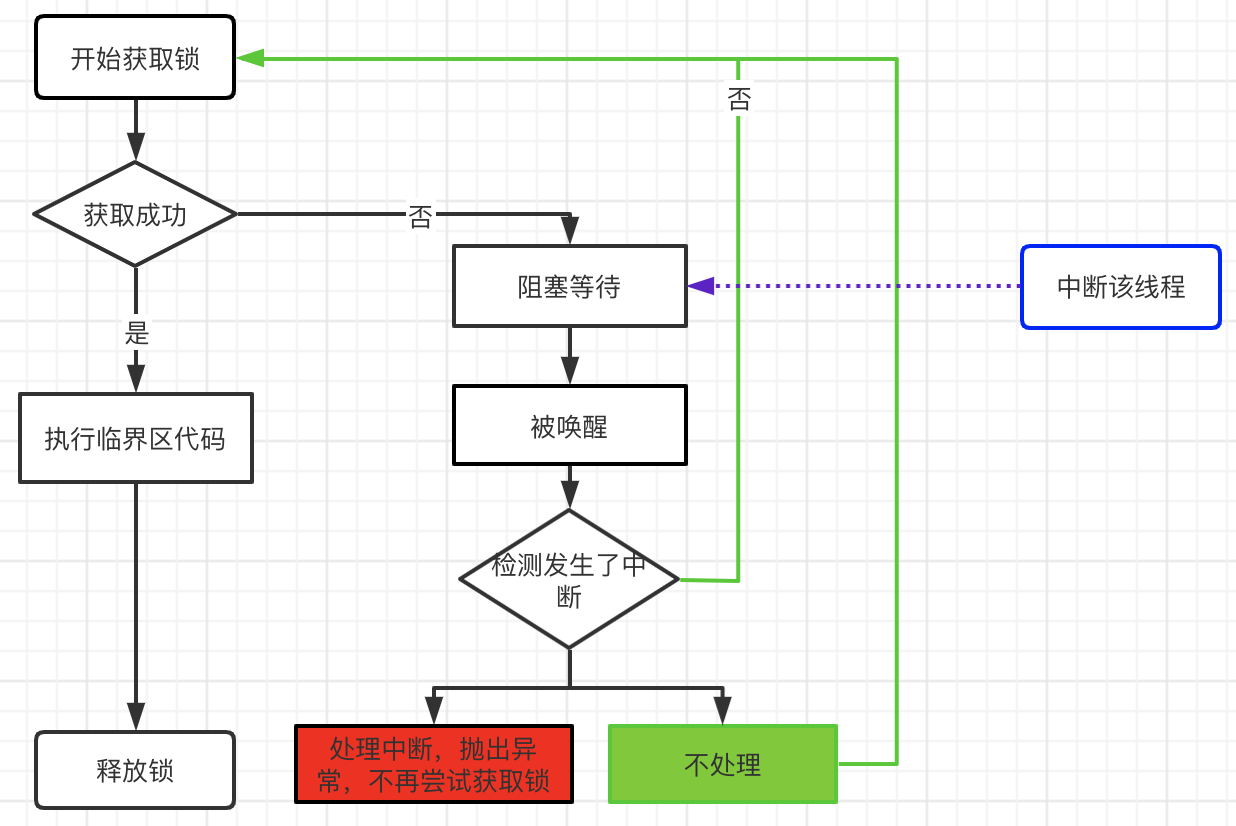 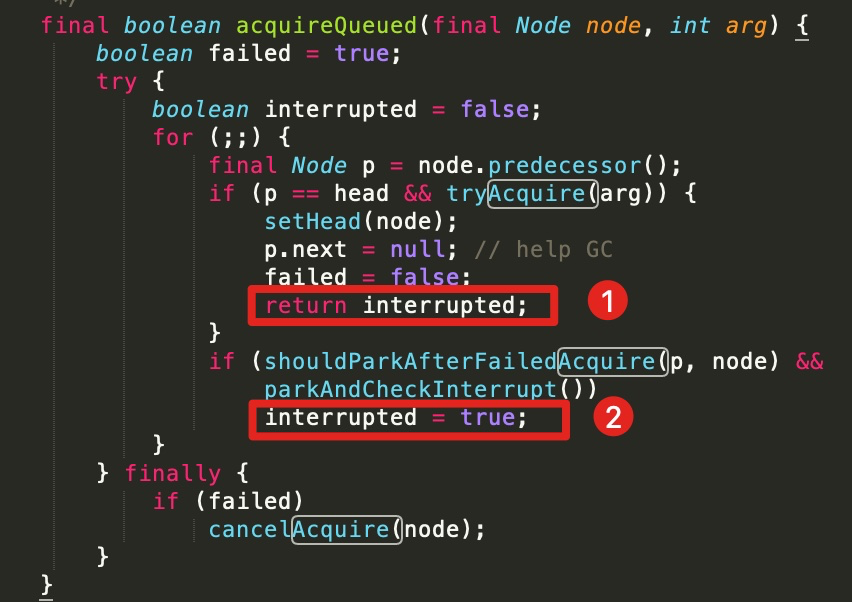 As shown in the above figure, only interrupts are detected in places 1 and 2, and then the interrupt value is returned to the caller of the previous layer.
In acquire(xx) on the upper layer:

If you find that an interrupt has occurred, you just fill in the interrupt flag again.

To interrupt the process of obtaining locks, you need to detect the interrupt flag bit, throw an exception or exit the process. See how AQS is implemented:

It can be seen that exceptions are thrown in two places: 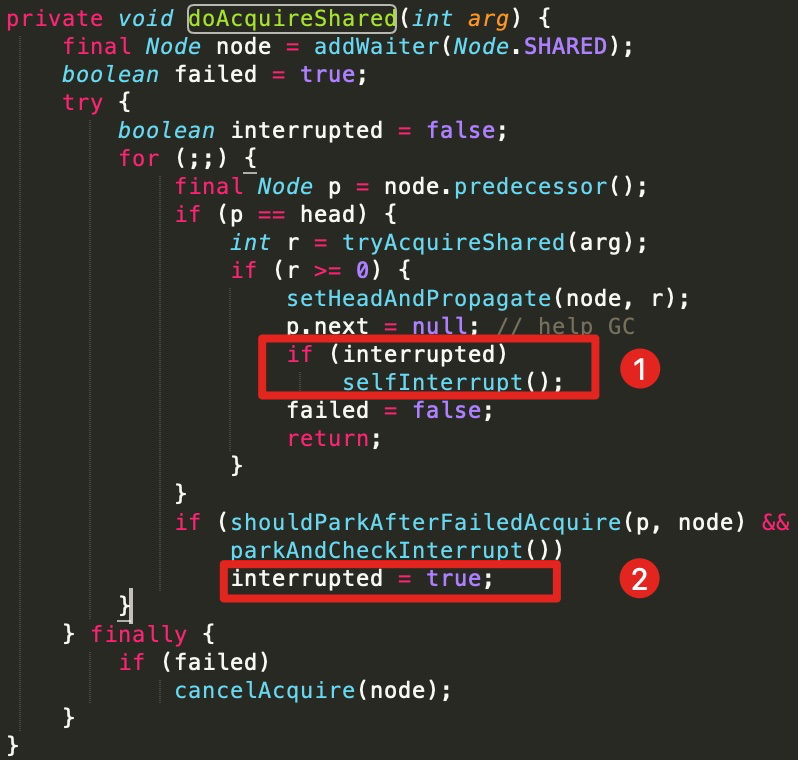 At this time, the lock is a non interruptible shared lock.

As you can see, it is consistent with the logic of interruptible exclusive lock processing interrupt.

3. Lock with / without time limit

It can be seen from the above that although the lock can respond to an interrupt, there are other scenarios that are not covered:

The thread does not want to wait all the time to acquire the lock, but wants to wait for a certain time. If the lock is not acquired, it will give up acquiring the lock.

It can be seen that after a thread is suspended, there are two ways to wake it up:

When the thread is awakened, check the interrupt flag bit. If an interrupt occurs, throw an exception directly. Otherwise, try to obtain the lock again. If obtaining the lock fails, judge whether it has timed out. If so, exit.

Shared lock that can wait for a limited time

Similar to an exclusive lock that can wait for a limited time, it will not be described in detail.

AbstractQueuedSynchronizer has a subclass: ConditionObject
It is the basis of waiting / notification.
Let's take a look at its structure:

firstWaiter and lastWaiter jointly maintain the waiting queue in combination with the nextWaiter pointer in the Node: 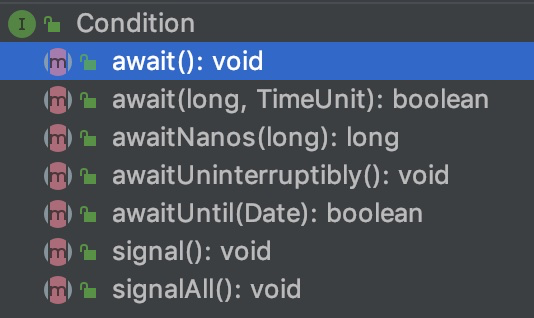 It can be seen that there are two methods: awaitXX(xx)/signalXX():

Thread A calls awaitXX(xx) to block and wait for the condition to be met, and thread B calls signalXX() to notify thread A that the condition is met. Obviously, this is A thread synchronization process.
Take await()/signal()/signalAll() methods to analyze the waiting / notification mechanism.

Throughout the await() method, three main tasks have been done:

1. Encapsulate the thread to the Node node and join the waiting queue.
2. The pending thread waits for the condition to be met.
3. After the thread wakes up, it scrambles for the lock.

Six key methods are marked in the note. Let's take a look at them respectively:
(1)

Function of this method: encapsulate the thread as a node and add it to the waiting queue.
(2)
Since you have to wait, release the lock so that other threads can obtain the lock and do the corresponding operation.

From this method, we can see that when await() is called, the AQS must be guaranteed to be an exclusive lock.
(3)

You need to ensure that it is not in the synchronization queue to operate.
(4)

(5)
Although the node has been added to the synchronization queue, it may not be removed from the waiting queue (without calling signal), so it needs to be checked here.

It can be seen that even if an interrupt occurs, await(xx) will not process the interrupt until it obtains the lock, which ensures that the thread must obtain the lock when returning from the await(xx) call.

It can be seen that when calling signal(), you need to ensure that the AQS is an exclusive lock and that the current thread has obtained the exclusive lock.
Throughout the whole signal() method, there are three main points:

5. Similarities and differences between synchronization queue and waiting queue

Let's start with a code:
Wait / notify application of Object.java:

Similarities and differences between the two:
Same point

1. The corresponding method can only be called after obtaining the lock. Obtaining the lock is to ensure the correctness of the condition variable under the condition of thread concurrency.
2. Wait / notify methods appear in pairs.
3. Waiting methods can respond to interrupts.
4. All wait methods support timeout return.

The next article will focus on the implementation and application of subclass wrappers derived from AQS, such as ReentrantLock, ReentrantReadWriteLock, Semaphore and CountDownLatch.

This paper is based on jdk1.8.

If you like it, please praise and pay attention. Your encouragement is my driving force

During continuous update, work with me step by step to learn more about Android/Java