Android - the end of Gradle tutorial

So far, the Gradle foundation and Kotlin foundation have been explained. Therefore, in this article, we will explain in detail the construction optimization of Gradle and how to migrate from Groovy to KTS!

Optimization is all about configuration. Just go through it quickly! Focus on migrating KTS

By default, when Gradle processes multiple modules, it usually processes them one by one. Set parallel compilation in gradle.properties under the root directory of the project to improve the compilation speed:

The process always exists after the first startup. When you compile it again, you can reuse the process

Dex in process allows multiple DEX processes to run in a single VM, which makes incremental and clean-up builds faster. You need to set a heap size of at least 1536MB of memory.

Set in the build.gradle file under app:

Configure dexOptions and enable library pre-processing: Dex In Process: Android studio 2.1 adds a new feature: Dex In Process, which can greatly speed up recompilation and improve the performance of Instant Run. Configuring the corresponding DEX build features can improve the build speed.

Some setting instructions of dexOptions:

There are many configurations you need when preparing the release version of the app, but you don't need them when developing the app. Starting an unnecessary build process will slow your incremental build or clean build. Therefore, you need to build a variant that only retains the configuration required during development. Built through productFlavors, dev represents the debug version and prod represents the release version

When you declare dependencies in the build.gradle file, you should avoid using the + sign at the end of the version number, such as com.android.tools.build:gradle:4. + because the dynamic version number will lead to unknown version updates, make it difficult to solve version differences and slow construction. You should use static or hard coded version numbers instead.

Extract the relatively independent functional modules in the code and create new modules for development. Modularizing your code in this way will allow the construction system to only compile those modules that have changed, and cache their construction results for later construction. At the same time, it can also improve development efficiency and publish multiple apps on maven. (component and plug-in)

All right, just pass the above quickly! Next is the focus of this article!

Well, I've said a lot of concepts. Now it's time to start!

We can see that include can pass multiple parameters continuously. We can guess that there must be vararg keyword. Enter the corresponding source code to see:

Write this first, and then click compile / try... In the upper right corner. If you can see the source code after successful compilation, you can continue to the next step!

Continue to transform the new build.gradle.kts

After compilation, execute the Task on the right

OK, now the root build.gradle.kts has been migrated. Next!

2.2.3 migrate the build.gradle corresponding to the main model

Create the corresponding build.gradle.kts file. Of course, you can comment out the code in the original file, and then rename and suffix it!

Now Kotlin DSL has been completely introduced. You can write code when prompted, and you can see the source code. It's really cool.

Groovy didn't have any tips before. You can't read the source code. Put on the pain mask directly.

I make complaints about it and go back to the subject.

build.gradle.kts corresponding to the new model

First write the script plug-in, and then click Sync Now on the right. Because the content written later is in the com.android.application script plug-in, you need to import it first before writing it later!

After compilation, continue to transform:

build.gradle.kts corresponding to the new model

Note that buildTypes and productFlavors are the only two places that have changed the most. The others can be changed to =; Or change to ("xx").

As for when to use =, when to use ("xx"), readers can look at the corresponding source code!

Of course, you can also choose to try = no, then use ("xx"). If neither of them can be used, it depends on the source code! Anyway, now you can see the source code anytime and anywhere! 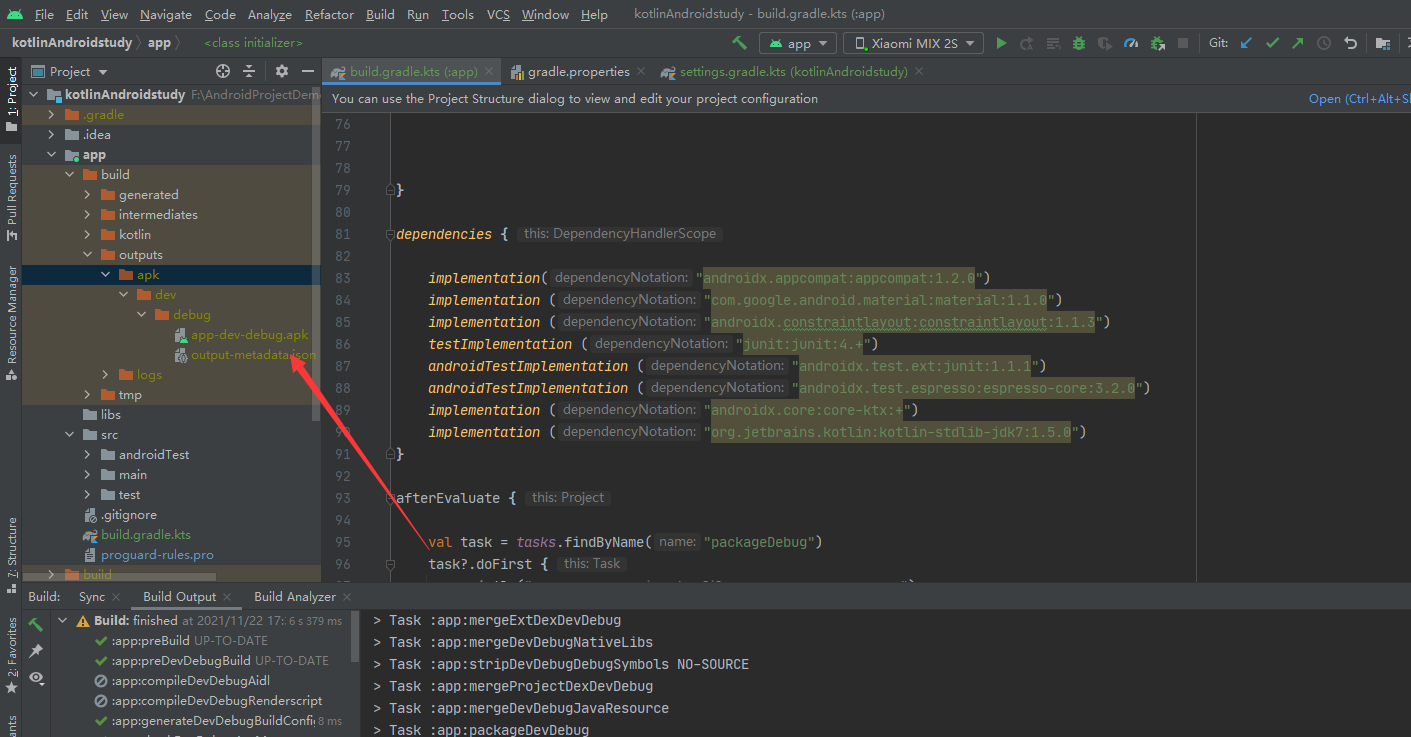 What knowledge points do you need to master in this column?

Look at this. How much do readers know?

Ha ha ha, come here! This column tutorial is over! Of course, learning knowledge can not play its greatest role! We need to combine actual combat to refine Kotlin's knowledge points!

For example: Tinker hot update, bytecode stub and so on! Will use Gradle related knowledge points! I'll see you again in future examples!

All right, that's it! No sigh! Starting with the next article, we will open the Jetpack column!: >