Tycoon is a multi platform Java blackmail software for Windows ® and Linux ®, which has been in the field since at least December 2019. It is deployed in the form of Trojan Java runtime environment (JRE) and executed in the form of obscure java image format.

It has been observed that threat actors behind Tycoon use targeted delivery mechanisms to penetrate small and medium-sized companies and institutions in the education and software industries, where they will continue to encrypt file servers and demand ransom. However, since the public RSA private key is reused, it is possible to recover the data without having to pay in an earlier version.

Working with KPMG's UK Cyber Response Services, BlackBerry research and intelligence team recently discovered a new ransomware written in Java. Blackmail software is deployed against targeted attacks of the organization. After the domain controller and file server of the organization are attacked, the system administrator has been locked out of the system. After the forensic investigation of the infected system, it is obvious that the initial intrusion was carried out through the Internet Oriented RDP jump server.

The following figure illustrates how an attacker managed to gain initial access and start infecting the entire site's system: 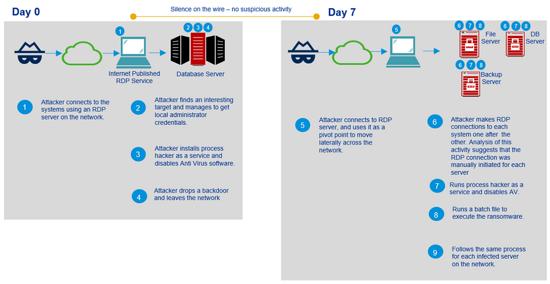 Post event analysis of an Internet facing RDP server cannot be performed because it has been restored. However, our analysis of the victim machine shows that some techniques used by the attacker are abnormal and noteworthy:

·In order to achieve persistence on the victim's machine, the attacker used a technique called "image file execution option" (IFEO) injection [2]. The IFEO settings are stored in the Windows registry. These settings give developers the option to debug the software by debugging the application's attachments during execution of the target application.

·Then, a backdoor operation is performed next to the Microsoft Windows onscreen keyboard (OSK) function of the operating system:

·The attacker used the ProcessHacker utility to disable the organization's antimalware solution and change the password of the Active Directory server. This prevents victims from accessing their systems.

·Most attacker files are time stamped, including Java libraries and execution scripts, and the file date time stamp is 15:16:22, April 11, 2020:

Finally, the attacker executed the Java ransomware module to encrypt all the file servers, including the backup system connected to the network.

Tycoon ransomware comes in the form of a ZIP archive, which contains the Trojanized Java Runtime Environment (JRE) build. The malware is compiled as a java image file (JIMAGE), which is located in lib \ modules in the build directory.

JIMAGE is a special file format for storing a custom JRE image designed for use by the Java virtual machine (JVM) at run time. It contains the resources and class files for all Java modules that support a specific JRE build. This format was originally introduced in Java version 9 and has few records. Unlike the popular Java archive format (JAR), JIMAGE is mainly internal to the JDK and rarely used by developers: 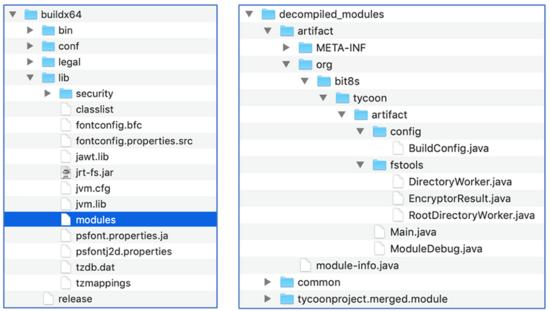 Ransomware is triggered by executing a shell script that uses the java-m command to run the Main function of a malicious Java module.

A malicious JRE build contains both Windows ® and Linux ® versions of this script, which indicates that the threat factor is also for Linux ® servers: 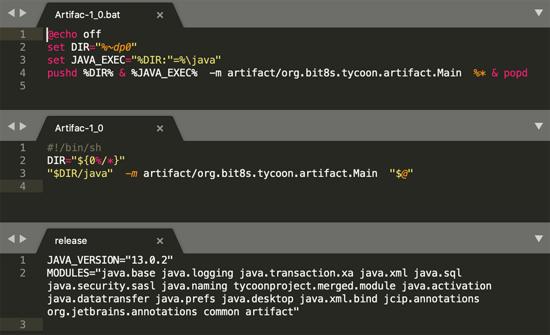 The malware configuration is stored in the BuildConfig file of the project and contains the following information: 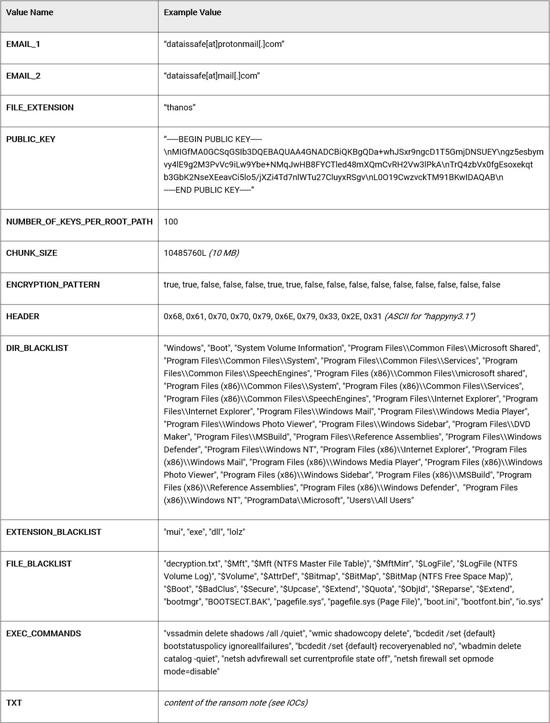 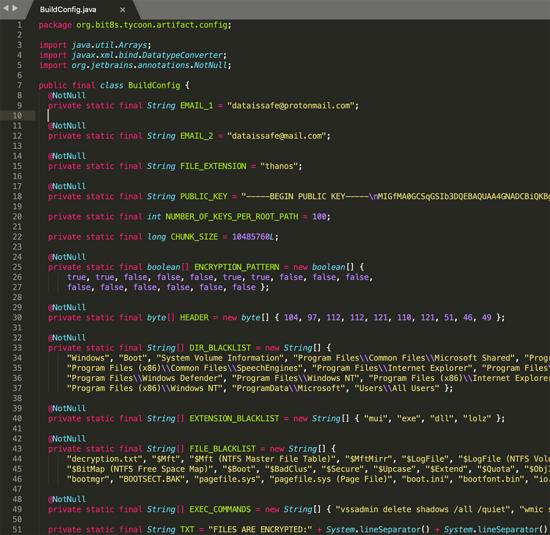 Figure 8: part of the BuildConfig file

After execution, the malware runs a set of Shell commands specified in the BuildConfig file:

The first four bytes of the SHA256 hash value of the system UUID value are used to generate an install for each victim_ ID value. To obtain the UUID, the malware executes the following wmic command:

The encrypted path list can be passed as a parameter; alternatively, the malware will generate a list of all root paths in the system. A separate encryption thread is created for each item in the path list.

After the encryption process is completed, the malware will ensure that the files are not recoverable by overwriting the deleted files in each encryption path. It uses embedded Windows utilities cipher.exe To complete this task: 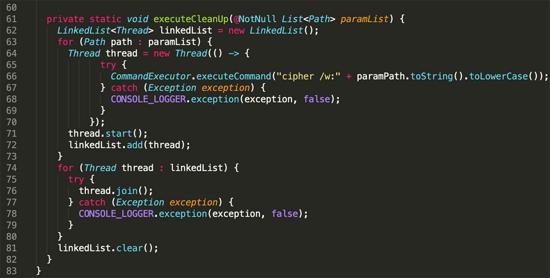 AES-256 algorithm in [Galois / Counter (GCM) mode 3] is used to encrypt the file with 16 byte GCM authentication label to ensure data integrity. use java.security.SecureRandom Function to generate a 12 byte initialization vector (IV) for each block. The size of the encryption block is specified in BuildConfig and set to 10 MB, while the mode setting specifies the mode in which the file block is to be processed. By skipping a portion of a larger file, an attacker can speed up the encryption process while destroying the file and making it unusable.

For each encrypted path, use the java.security.Secure The. Random function generates an AES-256 key array. The maximum number of keys per path is set in BuildConfig and may vary between samples. Each file (or file block, if the file is larger than the block size) will be encrypted with a different AES key, then encrypted with the attacker's RSA-1024 public key and saved in the block metadata block:

The metadata added to each encryption block contains the following: 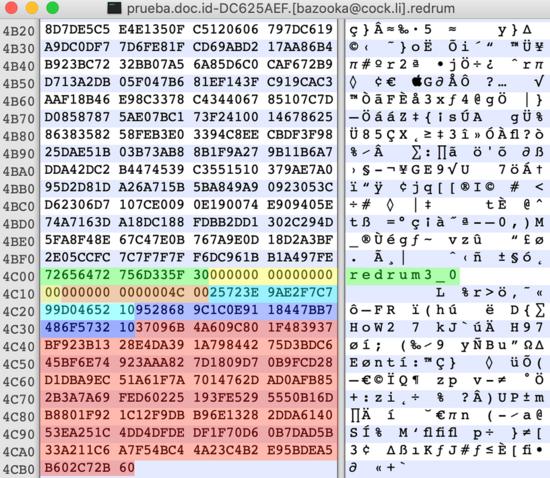 Because asymmetric RSA algorithm is used to encrypt the AES key, the private RSA key of the attacker is needed for file decryption. Although theoretically it can decompose the 1024 bit RSA key, it is not yet implemented and requires extraordinary computing power.

However, one of the victims who asked for help on the BleepingComputer forum [4] stored an RSA private key, presumably from the victim who bought it from the attacker. It turns out that this key can successfully decrypt some files affected by the earliest version of Tycoon ransomware, which added the. redrum extension to the encrypted file: 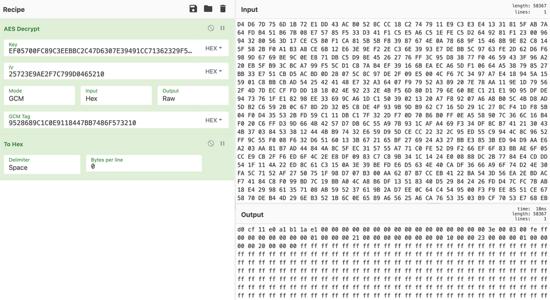 Unfortunately, it doesn't work with the latest "happyny3.1" version, which adds. grinch and. thanos extensions to encrypted files.

Malware writers have been looking for new ways to spread it. They are gradually getting rid of the traditional confusion technology and turning to the uncommon programming languages and obscure data formats. We've seen a significant increase in ransomware written in languages like Java and Go. This is the first example we encountered that specifically abused the Java JIMAGE format to create a custom malicious JRE build.

Tycoon has been out for at least six months, but the number of victims appears to be limited. This indicates that the malware may be highly targeted. It may also be part of a broader effort to use several different ransomware solutions, depending on the approach considered more successful in a particular environment.

Some overlaps in e-mail addresses, as well as ransomware text and naming conventions for encrypting files, indicate a link between Tycoon and Dharma / CrySIS ransomware.