We have already touched the topic of pointer in the chapter of pointer at the primary stage. We know the concept of pointer:

In this chapter, we continue to explore the advanced topic of pointers

Think about the following code. Where do pc and p point?

Think about the following code. What is the output?

So the results are shown in the figure below 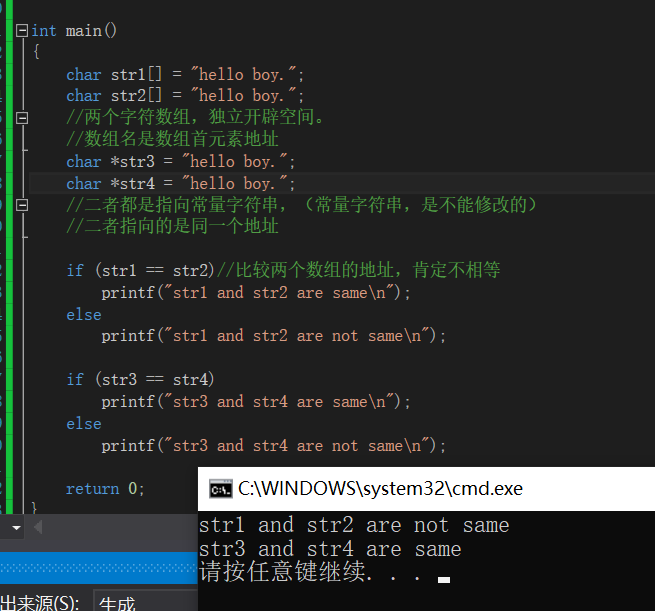 Is a pointer array a pointer or an array?
The answer is: array.

Is the array pointer a pointer or an array?
The answer is: pointer.

The two forms are very similar, so how can we distinguish them?

We know that array subscripts have higher priority than value operators. Therefore, p is first defined as an array with five elements. Its type is int *, so it is a pointer to an integer variable.

[Conclusion] pointer array is an array, and each array element stores a pointer variable.

How to initialize the pointer array? 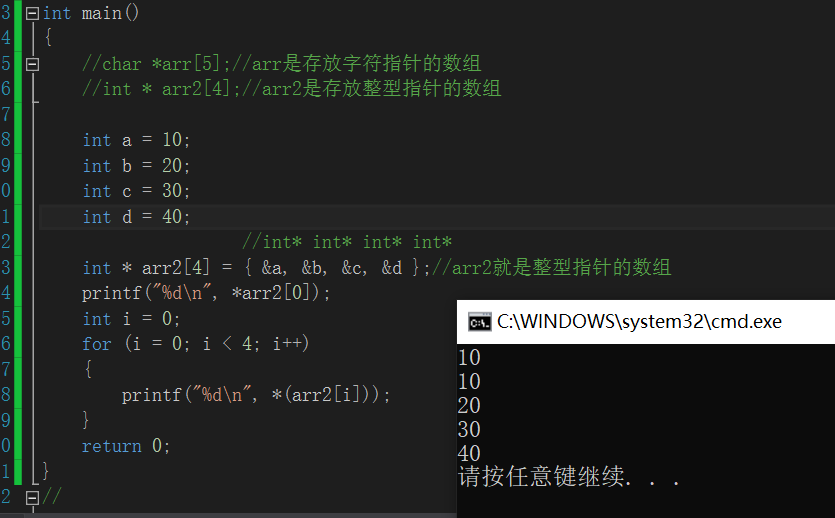 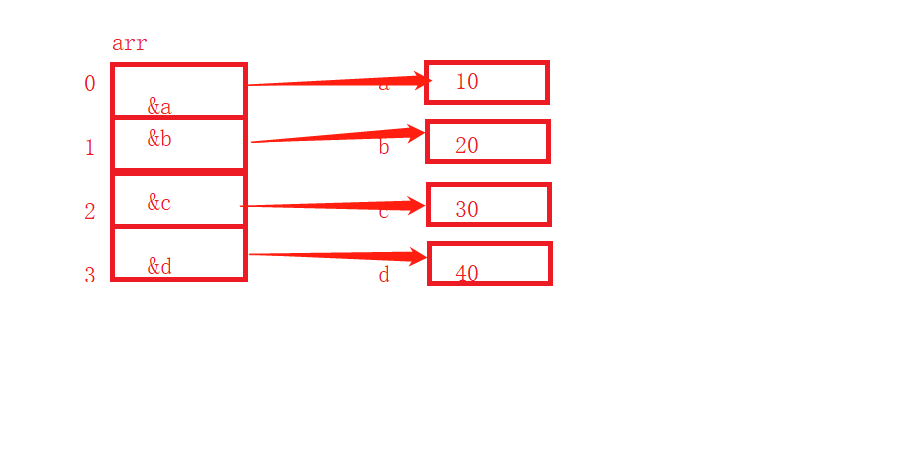 Have you found that if defined in this way, it will be a little cumbersome.
Therefore, we can adopt the following methods: 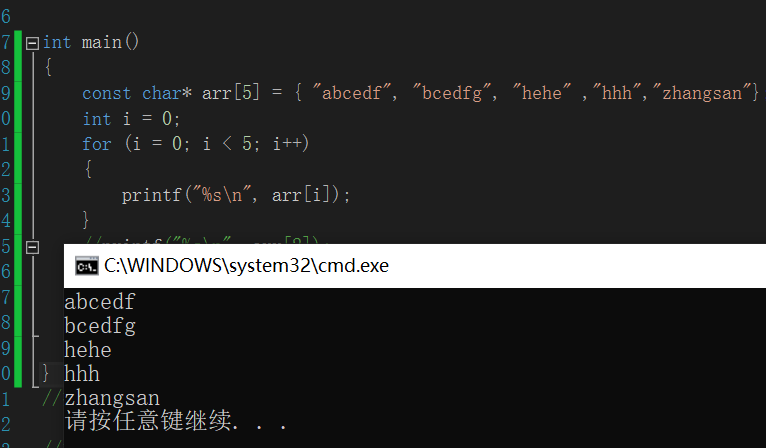 First, it is a pointer to an array. In a 32-bit system, it always takes up 4 bytes,
As for the number of bytes of the array it points to, I don't know. It is short for "pointer to array".

An array pointer is a pointer to an array address, which is essentially a pointer.

In the above code, parentheses and array subscripts are in the same priority queue, so they are executed from left to right.

Therefore, p is first defined as a pointer variable, and then [5] represents an array with 5 elements, and p points to this array.

Use the following example to deepen your understanding

So how do we initialize? 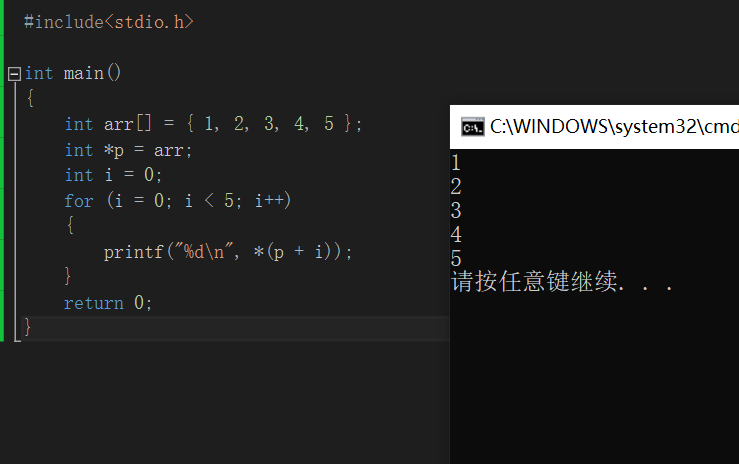 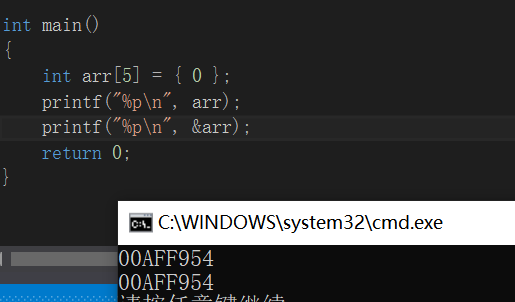 As you can see, their values are the same.
But what if they + 1?
As follows: 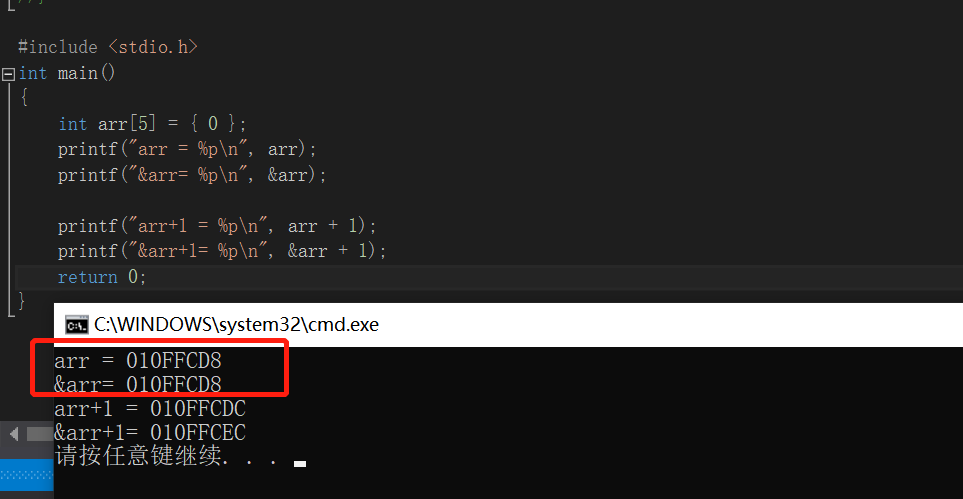 You can see that the result after + 1 is different.
So why?

How to use it, for example:

Look at the following code and think about how we can use array pointers to print the results we want? 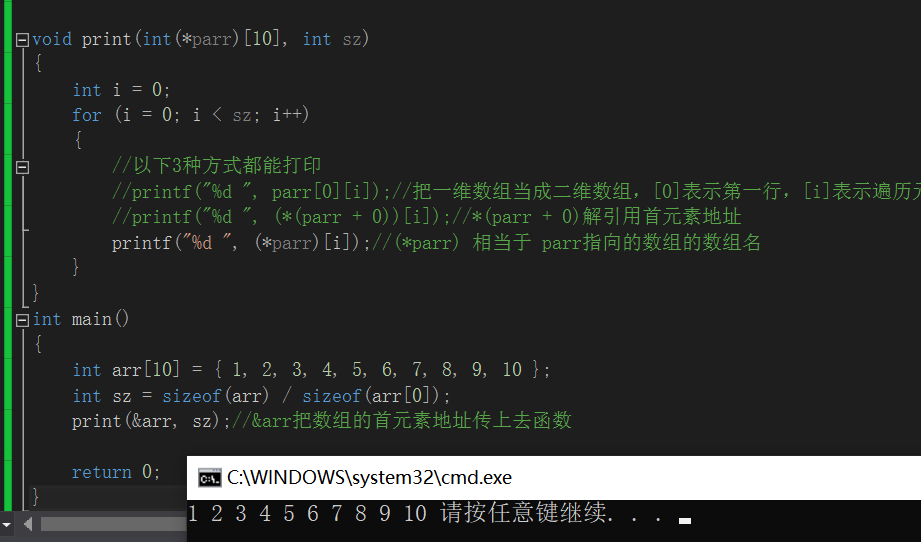 A formal parameter is a parameter when a function is declared or defined
The argument is the actual value passed from the calling function when the function is called.

How to pass parameters to a one-dimensional array?
Let's take a look at an example:

Please think about whether the following can be passed successfully?

for instance:
Can the same thinking be successful?

If we use the first level pointer to receive the passed parameters, what form can our parameters be?

In fact, we can do it in the following ways:

If it is a secondary pointer, how to pass parameters?

Similarly, we can have the following methods.

What is a function pointer?

what do you mean?

So what does the first code mean?
Here fun1 is not a function name, but a
Pointer variable, which points to a function. This function has two pointer type parameters, and the return value of the function is also a pointer.

So how do we use function pointers?

When we use a pointer, we need to use the key ("*") to get the value in the memory it points to, and the same is true for function pointers. By using (*pf) to extract the function that exists at this address, then call it.

Let's take a look at what the following code means?

Step 1: void(*) (). You can see that this is a function pointer type. This function has no parameters and no return value.

Step 3: ((void() ())0), which is the content of a section of memory starting from the 0 address. Its content is the function stored in a section of area with the first address of 0.

6, Pointer to array of function pointers

It looks very complicated, but it's not difficult to analyze it carefully.

The function pointer array pointer here is just a pointer. But this pointer points to an array, which contains pointers to functions. That's it. (dolls)

How to define it? The following code describes

This article has been written off and on for several days. First, I don't have half a bucket of water. A lot of knowledge is limited to theory and can't be practiced. Second, the high-order pointer is really difficult to understand. Even if it is written now, the understanding is still not thorough. Referring to the book "in-depth analysis of C language", if you want to have a deeper understanding, it is suggested to look for this book and gain more.