C language itself has built-in types such as int, float, double... And also provides customizable custom types or construction types such as structure, enumeration and union.

A structure is a collection of values that are collectively referred to as member variables. Each member of the structure can be a different type of variable. Therefore, structure can be used to describe a complex object, in which members are various attributes of the object.

The above is an example of a structure description book. Here b1,b2 and b3 are completely equivalent and are global variables, while b4 defined in the main function is a local variable.

Define the anonymous structure type, omitting the tag name, so you can only create variables in the member list.

As shown in the above code, use the same anonymous structure to create a structure pointer ps and store it in the address of s1.

At first glance, it seems OK, that is, although the members of two anonymous structures are the same, the compiler defaults to two structure types. Both belong to two types of variables, so it will prompt that the pointer types are incompatible.

If feasible, how to calculate the size of the variable created by the structure? A structure variable of the same type is nested by itself. If it is nested all the time, the size cannot be calculated. So it's obviously wrong.

Similar to the use of linked lists in data structures, pointers are used to store the address of the next node. As shown in the figure:

The above scheme is the correct method. Of course, the typedef renaming here is still meaningless for the structure definition part, so the function of anonymous structure is very weak, no matter.

Through the structure memory alignment, it can be seen that when the structure is called by value, it not only opens up a space of surface size. If the structure is too large, the system overhead of parameter stack pressing will be large, resulting in performance degradation. Struct parameter passing or selective address calling.

That is, the first member must be placed in the first position of the memory space opened up for the structure.

The author guesses that it is to gather the integer multiple of the read field width, so as not to cause unnecessary trouble by allowing the variables created later to follow.

Now let's look at the above example:

Find the size of the variable created by the following structure.

This memory alignment mechanism seems to waste space and make the calculation cumbersome, but its existence is necessary. Although there is no official explanation, it can also be summarized as the following two points:

Not all hardware platforms can arbitrarily read any data on the address. Some platforms can only read specific data at specific addresses in specific ways. For example, read only at the multiple of address 4, and read 4 bytes of data at a time. Poor portability between platforms.

The data shall be stored on the natural boundary of the address and aligned as much as possible to prevent the data in the same space from being accessed twice and improve the efficiency of reading data.

The conclusion is that memory alignment is to sacrifice space complexity, reduce time complexity and exchange space for time. Of course, what we have to do is try our best to save both space and time

Different variables in the structure are placed in different positions, and the size of the structure is different. It can save space to a certain extent by concentrating members with small space in the back.

The macro calculates the offset of a variable in the structure relative to the first address.

The declaration of a bit segment is similar to that of a structure, but there are two differences.

The size of bit segment A is calculated as 8, and the minimum of 4 integer variables is 16 bytes. It shows that bit segments can save space to A certain extent.

When describing an object, all bits in the attribute variable may not be used. The use of bit segments can specify the space allocated to the variable by the system. Of course, too large data will still overflow.

As shown in the figure, first open up 4 bytes of space. A occupies 2 bits, b occupies 5 bits, and C occupies 10 bits. There are 15 bits left in these four bytes, which is not enough for d storage. We must open up a space of 4 bytes. This is the calculated eight bytes.

The question is whether d then half is stored in the first byte, half in the second byte, or all in the newly opened space?

Different compilation environments may produce different results, which is not specified in the C standard. The author only considers the Windows environment here. Please see the following examples.

The assignment of bit segment variables brings another problem: do you use high address or low address first in a single byte? This is also not specified in the standard.

Let's assume that the high address is used first and then the low address is used in the bit segment. At the same time, if the remaining space is insufficient, it will be abandoned and reopened. If the final result in vs is consistent with the expectation, the assumption is correct. 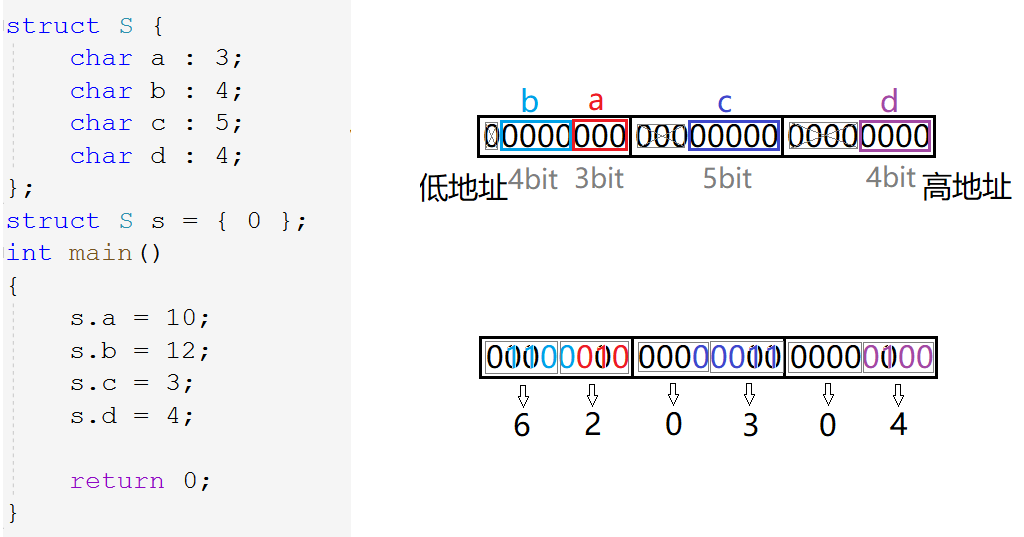 Vs shows that the results are completely consistent with our hypothesis. Therefore, the assumption is correct. Therefore, it can be concluded that in vs environment:

Since these rules are not clearly defined in the C standard, these conclusions vary from compiler to compiler. Therefore, the platform portability of bit segment is poor.

In the early 16 bit machine, int accounted for 2 bytes, a total of 16 bits, and the bit number of variable allocation should not be more than the maximum value.

Compared with the structure, the bit segment can achieve the same effect and save space, but it needs to be used carefully and has poor cross platform performance. The bit segment can be applied to the network protocol without wasting a lot of space. Every few bits in the network transmission protocol form a group for transmitting different data.

Enumeration, as the name suggests, lists one by one. There are many data that can be listed, such as gender, month, color, etc.

At the same time, enumeration is equivalent to shaping constant, so all enumeration constants are 4 bytes.

Enumeration constant values start from 0 by default and increase in sequence. You can also initialize (completely or incompletely) and assign an initial value to it. The constant value before the initialized constant is not affected, and the subsequent constants are still incremented in turn.

Of course, constants can only be initialized, not assigned.

The above operation is to create a variable of enumeration type and assign the value to GREEN.

C language is not so strict in syntax detection. So 1 and 2 are OK. In C + +, 1 is considered a literal constant and GREEN is an enumeration constant. Second, they are not equal, so they cannot be assigned.

#The constants defined by define belong to global constants and are easy to conflict.

#The constant defined by define has been replaced during precompiling and no longer exists. Enumeration types always exist, and there are values and types for debugging.

Multiple constants can be defined at a time and easy to manage.

Union is a special custom type, which also contains a series of members, especially in that these members share the same space. Therefore, a consortium is also called a common body.

Calculate that the size of the union variable is 4 bytes, but an integer and character variable also needs at least 5 bytes. Why is this?

As can be seen from the above code, C and I share 4 bytes.

Use the consortium to judge the size of the current machine.

Because all members of the consortium share a space, after calculating the maximum member size, only a few more bytes of space need to be wasted in the end to align to an integer multiple of the maximum alignment number.

If the original size should be 5 bytes and the maximum number of alignments should be 4, align to 8 bytes.

If the original size should be 14 bytes and the maximum alignment number should be 4, it should be aligned to 16 bytes.