What is an interrupt

Interrupt is a mechanism to notify the CPU after the external device completes some work (for example, after the hard disk completes the read-write operation, it informs the CPU that it has completed through interrupt). In the early days, computers without interrupt mechanism had to query the status of external devices through polling. Because polling is exploratory (that is, the device is not necessarily ready), they often have to do a lot of useless queries, resulting in very low efficiency. Since the interrupt is actively notified to the CPU by the external device, the CPU does not need to poll to query, and the efficiency is greatly improved.

There are two common interrupt controllers:

The traditional PIC (Programmable Interrupt Controller) is connected by two 8259A style external chips in a "cascade" way. Each chip can process up to 8 different IRQs. Because the INT output line of the PIC is connected to the IRQ2 pin of the main PIC, the number of available IRQ lines reaches 15, as shown in the figure below. 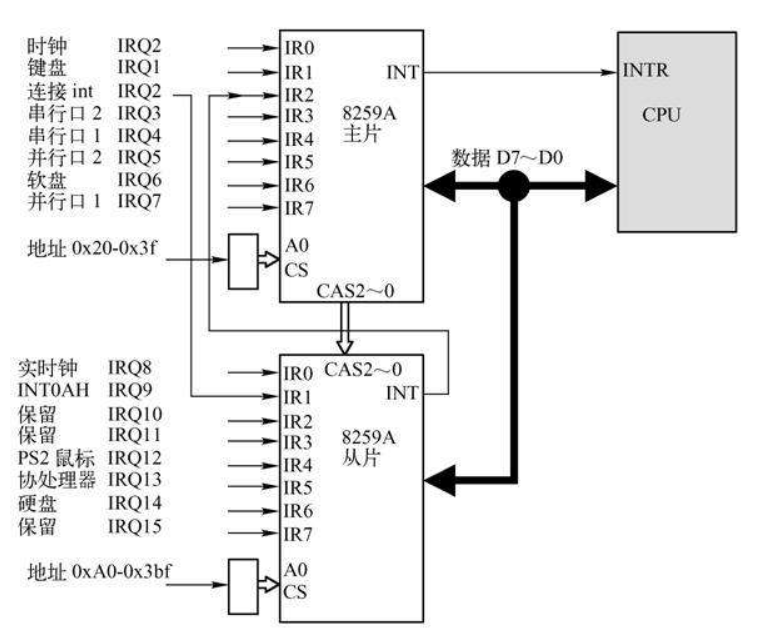 8259A is only suitable for single CPU. In order to fully tap the parallelism of SMP architecture, it is very important to be able to pass interrupts to each CPU in the system. For this reason, Intel introduced a new component called I/O advanced programmable controller to replace the old 8259A Programmable Interrupt Controller. The component consists of two parts: one is "local APIC", which is mainly responsible for transmitting interrupt signals to the specified processor; For example, if a machine has three processors, it must have three local APICS. Another important part is the I/O APIC, which mainly collects interrupt signals from I/O devices and sends signals to the local APIC when those devices need to be interrupted. The system can have up to 8 I/O APICS.

Each local APIC has a 32-bit register, an internal clock, a local timing device, and two additional IRQ lines LINT0 and LINT1 reserved for local interrupts. All local APICS are connected to I / O APICS to form a multi-level APIC system, as shown in the figure below. 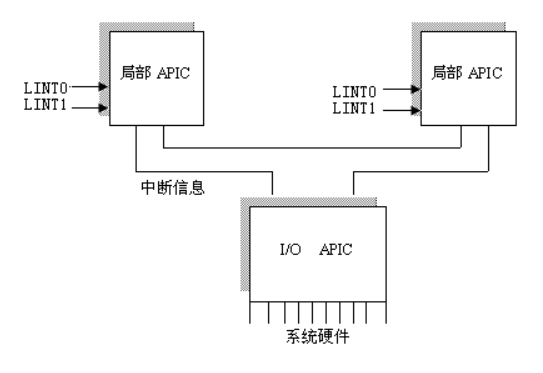 At present, most single processor systems contain an I/O APIC chip, which can be configured in the following two ways:

To identify whether a system is using I/O APIC, you can enter the following commands on the command line:

Broadly speaking, interrupts can be divided into four categories: interrupt, fault, trap and termination. See table for similarities and differences between these categories.

Table: interrupt categories and their behaviors

Each interrupt in the X86 architecture is given a unique number or vector (8-bit unsigned integer). The unshielded interrupt and exception vectors are fixed, while the maskable interrupt vector can be changed by programming the interrupt controller.

As mentioned earlier, the 8259A interrupt controller is connected by two 8259A style external chips in a cascade manner. Each chip can process up to 8 different IRQs (interrupt requests), so the number of available IRQ lines reaches 15. As shown below: 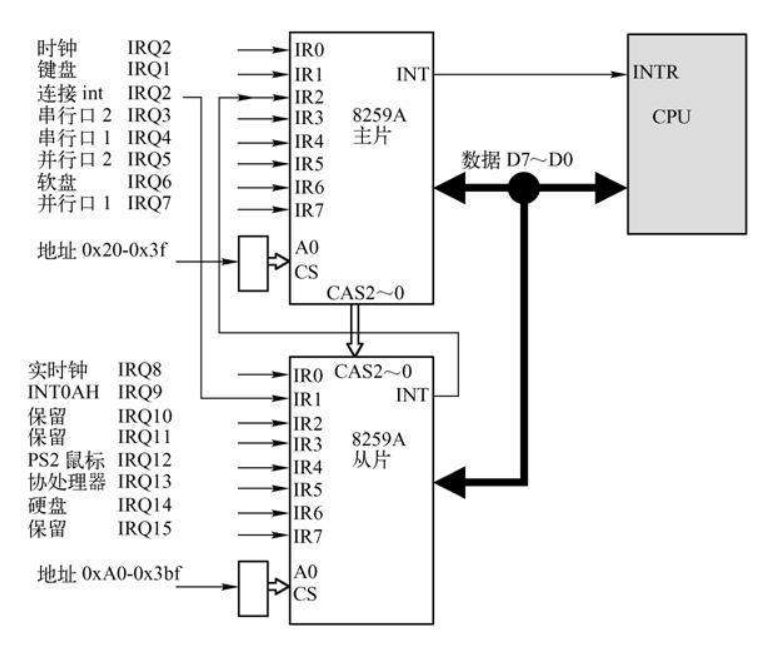 In the kernel, each IRQ line consists of the structure irq_desc_t to describe, irq_desc_t is defined as follows:

Let's talk about the functions of each field of the irqaction structure:

irq_desc_t structure relationship is shown in the figure below:

In the kernel, you can use setup_irq() function to register an interrupt handling entry. setup_ The irq() function code is as follows:

setup_ The IRQ () function is relatively simple, which is to find the corresponding IRQ through the IRQ number_ desc_ T structure and connect the new irqaction to irq_desc_t structure in the action linked list. Note that if the device does not support shared IRQ lines (that is, the SA_SHIRQ flag is not set in the flags field), an EBUSY error is returned.

Let's take a look at the registration instance of the clock interrupt processing entry:

You can see that the IRQ number of the clock interrupt processing entry is 0 and the processing function is timer_interrupt(), and shared IRQ lines are not supported (the SA_SHIRQ flag is not set in the flags field).

do_ The IRQ () function first obtains its corresponding IRQ through the IRQ number_ desc_ T structure. Note that the same interrupt may occur multiple times, so judge whether the current IRQ is being processed (judge whether the IRQ_INPROGRESS flag is set in the status field of irq_desc_t structure). If it is not processing the current, obtain the action linked list, and then call handle_IRQ_event() function to execute the interrupt processing function in the action linked list.

Next, look at handle_ IRQ_ Implementation of event() function:

The lower half of the interrupt is implemented by the softirq (soft interrupt) mechanism. In the Linux kernel, there is one called softirq_vec array, as follows:

Its type is softirq_ The action structure is defined as follows:

softirq_vec array is the core of softirq mechanism_ Each element of the VEC array represents a soft interrupt. However, only four soft interrupts are defined in Linux, as follows:

HI_SOFTIRQ is a high priority tasklet, while TASKLET_SOFTIRQ is a common tasklet, which is a task queue based on softirq mechanism (described below). NET_TX_SOFTIRQ and NET_RX_SOFTIRQ is specifically used for soft interrupts of network sub modules (not described).

To register a softirq handler, open_softirq() function. The code is as follows:

open_ The main work of the softirq () function is to_ Add a softirq handler to the VEC array.

softirq is processed through do_softirq() function is implemented, and the code is as follows:

Softirq was mentioned earlier_ VEC array has 32 elements, and each element corresponds to a type of softirq. How does Linux know which softirq needs to be executed? In Linux, each CPU has an IRQ type_ cpustat_ Variable of T structure, irq_cpustat_t structure is defined as follows:

So, do_ The softirq() function first passes softirq_mask(cpu) to obtain the shielded softirq corresponding to the current CPU, and softirq_active (CPU) & mask is to get the softirq to be executed, and then compare it__ softirq_ Each bit of the active field to determine whether to execute this type of softirq.

As mentioned earlier, the tasklet mechanism is based on the softirq mechanism. The tasklet mechanism is actually a task queue, which is then executed through softirq. There are two kinds of tasklets in the Linux kernel, one is high priority tasklet and the other is ordinary tasklet. The implementation of these two kinds of tasklets is basically the same. The only difference is the execution priority. High priority tasklets will be executed before ordinary tasklets.

As you can see, tasklet_vec and tasklet_ hi_ VECs are arrays. The number of elements in the array is the number of CPU cores, that is, each CPU core has a high priority tasklet queue and an ordinary tasklet queue.

If we have a tasklet to execute, the high priority tasklet can be executed through the tasklet_ hi_ The schedule() function is used for scheduling, while ordinary tasklets can be used through tasklets_ Schedule(). The two functions are basically the same, so we only analyze one of them:

The type of the function parameter is tasklet_ Pointer to struct structure, indicating the tasklet structure to be executed. tasklet_ hi_ The schedule () function first determines whether the tasklet has been added to the queue. If not, it will be added to the tasklet_ hi_ In the VEC queue and by calling__ cpu_raise_softirq(cpu, HI_SOFTIRQ) to tell softirq that hi needs to be executed_ Softirq type softirq, let's take a look__ cpu_ raise_ Implementation of softirq() function:

tasklet_ hi_ The action () function is very simple, which is to traverse the tasklet_hi_vec queue and execute the handler function of tasklet therein.