1. What is the core of big end and small end?

No matter in the big end or small end mode, when we read and store data, we must read or write from the low address of the memory to the high address in turn.

2. What is storage order?

With the premise that data is read or stored from low to high according to bytes, the following examples illustrate the difference between the large end and the small end.
Suppose A wants to send four bytes of data to B,
The storage mode of A is large end mode, and the storage mode of B is small end mode.
The memory distribution of A's storage 1234 is shown in the figure below

Because a stores in the big end mode and according to the law that the low address corresponds to the high byte, a sends the value int Value_A = 0x12345678.

B stores the received values in the memory as shown in the figure below. During storage, they are also stored from low address to high address

B after receiving, you need to read the value in memory to value_ From B, then value_ What is the value of B?
B is stored according to the small end mode, and the low byte corresponding to the low address, then int Value_B = 0x78563412
Many people here may have questions? Isn't it that the reading is from the low address to the high address? Why are the read values different for the same storage?

This is the key. After reading 0x12, the mode set by the system is that the low address corresponds to the low byte, and our Value_B is an int type and four bytes of data. The data displayed in front of us must be in descending order from left to right bytes, so 0x12 is placed in the lowest byte, as shown in the following figure.

I.e. Value_B = 0x78563412;
Value_A is not equal to Value_B. This is why we must confirm the byte order during network communication. We must ensure that the byte orders of a and B are the same. If they are different, we need to use the byte order conversion function.

After conversion, the value obtained by A is the temp value, that is, the value transmitted by B.
See here, even if the big end and small end problems are explained clearly, the core of the problem is actually a byte order and a storage order.

How to determine the byte order of the machine 1

The space occupied by Union data is equal to the space occupied by its largest member. Access to union members starts at an offset of 0 relative to the base address of the union, that is, access to any variable of the Union starts from the first address of the union.
Federation is a data type that stores different types of data in the same storage space. The addresses of these stores are the same, the memory of different storage areas in the Federation is overlapped, and any other one will be affected if any other is modified.

How to determine the byte order of the machine 2

How to determine the byte order of the machine 3 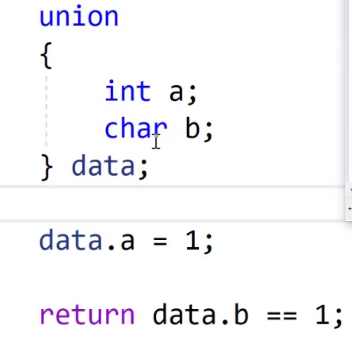