FreeRTOS is very popular in the embedded field because of its simplicity, compactness and complete functions. As shown in the figure below, FreeRTOS is the real-time operating system with the largest market share in the global embedded field except Linux. uCOS, RTX, ThreadX, etc. are far behind. In addition, it has been acquired by Amazon in recent years, and the application of FreeRTOS should be further expanded. There are many comparisons of various real-time operating systems on the Internet. I have also used several operating systems, including FreeRTOS, uCOS, etc., but FreeRTOS gives me the deepest impression that it is easy to transplant, can transplant quickly for different chips, and has changed some functions. 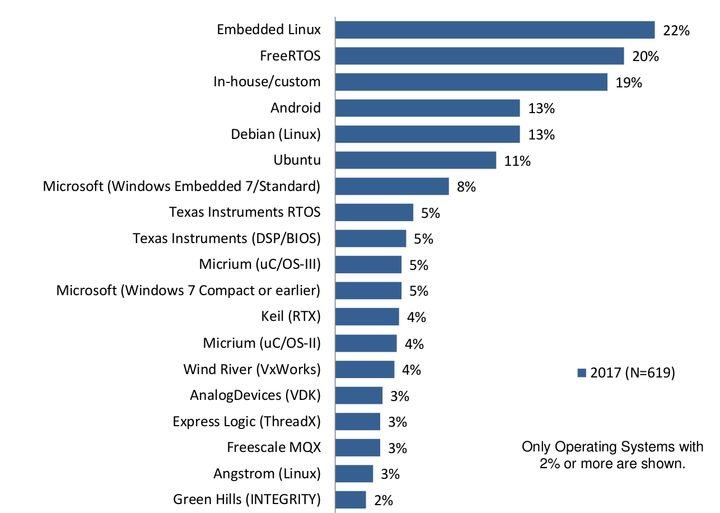 This article includes the following contents (this article is not suitable for beginners. The default readers have a good foundation for engineering construction and good ability to read and write embedded code):
1. Briefly describe the key points in the process of FreeRTOS transplantation;
2. Explain how to configure the task operation status monitoring required in the development stage;
3 according to the actual software stability, the source code of FreeRTOS is slightly modified, so that the task running state can be expanded freely according to their own needs. In this paper, the attribute [task switching times] is added to the source code. It is added automatically when task switching occurs, and can be obtained through the task state acquisition function of FreeRTOS.

There are many migration tutorials online, and there are many engineering demos based on KEIL and IAR. Therefore, this paper will not explain the migration process of FreeRTOS in detail, but only the general steps and main precautions.
1. From [official website] After downloading the source code, add the c file in the source directory to the project, copy the include directory to the project directory, and then find the interface file suitable for your MCU kernel in the source/portable directory and add it to the project.
2. Find a folder suitable for your MCU in the Demo folder, and copy the FreeRTOSConfig.h file to the project directory;
3. The operating system needs to run the scheduling function regularly in the tick timer interrupt, rely on the SVC exception handling function to obtain the current task control block, and rely on the Pending interrupt for context switching. The functions executed during the above interrupts and exceptions are given in the file port.c or portasm.s in the source/portable directory. They are generally assembly functions. FreeRTOS is named as follows:

In the interrupt vector table of the startup file, the above three interrupts and exceptions are named as follows:

Therefore, when the above interrupts and exceptions occur, in order to successfully call the scheduling and switching functions written by FreeRTOS, the following macro definitions need to be made in FreeRTOSConfig.h:

In this way, the vPortSVCHandler and xPortPendSVHandler functions in the FreeRTOS source code are replaced with the corresponding interrupt service functions in the interrupt vector table, so that the scheduling and task switching functions written by FreeRTOS can be entered when an interrupt occurs.
Here, some people will ask, don't you have an xPortSysTickHandler? Why isn't it replaced. The reason is that the current embedded system, whether bare metal or running operating system, generally enables the tick timer interrupt, and performs self addition operation on a variable in the interrupt, so that this variable becomes the timestamp of the whole system. Therefore, as soon as the system is initialized, I configure the tick timer interrupt with a cycle of 1ms, and add the time stamp in the interrupt function. In this way, I only need to put the xPortSysTickHandler function into the interrupt processing function of the tick timer, as shown below:

In this way, with the tick timer driven scheduling function and the Pending interrupt function for context switching, FreeRTOS can run, and the specific task creation and system startup will not be repeated.

The development phase needs to find and solve problems in long-term operation and testing, so it is necessary to obtain the running status of each task. Fortunately, FreeRTOS also provides this function. Generally speaking, the system monitoring is best placed in the tasks with the highest level, so as to ensure that all tasks can be monitored. Enabling task running status acquisition in FreeRTOS mainly includes the following steps:
1. Add macro definition in FreeRTOSConfig.h:

The first is the timer configuration function of running time, and the second is the timer timestamp acquisition function. Since we have configured a 1ms tick timer and created a time stamp variable that is always self added, the first macro definition here can be directly null, and the second macro definition is configured as sys in the above_ Gettick():

3. calling uxTaskGetSystemState in monitoring tasks to get the status of each task:

Among them, the incoming parameter void *arg of the function is the idle time of the task, which is used to release the cpu occupation right for other low priority tasks; N is the total number of tasks created for you (including an idle task). After calling uxTaskGetSystemState, pull the status of all tasks to task_state array, and assign the total running time of the system to total_time, that is, the timestamp in the tick timer. Where, TaskStatus_t structure elements are as follows, which can display task handle, name, sequence number, current status, etc

However, it is a little bad that the TCB control block in uCOS also has the element [task switching times], but there is no element in the TCB control block of FreeRTOS. This element often reveals whether there are exceptions in system switching, which is an important information in the development stage. Some people will say that there is not a ulluntimecounter element, which can reflect the total running time of the task. Does this seem to replace the switching times? In fact, it is not, because the statistics of task running time depend on #define portconfiguration_ TIMER_ FOR_ RUN_ TIME_ The minimum step size of the timer defined by stats (). Through reading the statistical source code of ulluntimecounter, it is found that if the timer step size time is too long, such as 10ms, it is likely that the task has completed one cycle and still cannot be counted into ulluntimecounter, because the time taken from task execution to task release CPU is less than 10ms when the task is switched, It cannot be accumulated to ulluntimecounter. The statistical source code of ulluntimecounter is as follows:

In order to solve the problem that the [task switching times] element is not included in the operation status information, the source code needs to be modified to support this function, so that we can intuitively view how many times a task has been scheduled. The specific steps are [add this element to the task control block] - [initialize this element when creating a task] - [add this element to the task status structure] - [add 1 to this element during task switching] - [return this element when obtaining task status]. Follow the steps below to modify the source code:
1. Add uint32 to the typedef struct tsktaskcontrollblock structure in tasks.c_ T switchtime element, as shown in the following code:

3. In taskstatus of task.h_ Uint32 is added to the T structure_ T switchtime, the code is as follows. Because the uxTaskGetSystemState function needs to be called to obtain status information, its parameter is TaskStatus_t pointer.

5. By reading the source code, we know that the uxTaskGetSystemState function really obtains the task running information is the vTaskGetInfo function called. Therefore, pxtaskstatus - > switchTime = pxtcb - > switchTime is added to the vtask getinfo function of tasks.c, and the code is as follows. In this way, when the uxTaskGetSystemState function is called, the switchTime element in TCB is assigned to taskstatus_ The T pointer is missing.