Jetpack DataStore is an improved new data storage solution that allows the use of protocol buffers to store key value pairs or typed objects.

DataStore stores data in an asynchronous and consistent transaction mode, which overcomes some shortcomings of shared preferences (hereinafter collectively referred to as SP).

DataStore is implemented based on Kotlin collaboration and Flow, and can migrate SP data to replace sp.

Before the emergence of DataStore, the storage mode we used most was undoubtedly SP, which was simple, easy to use and widely praised. However, google defines SP as lightweight storage. If less data is stored, there is no problem in use. When more data needs to be stored, SP may cause the following problems:

1. When the SP loads data for the first time, it needs to load it in full. When the amount of data is large, it may block the UI thread and cause a jam

2. SP read / write files are not type safe, and there is no mechanism to send error signals, and there is a lack of transactional API

3. The commit() / apply() operation may cause ANR problems:

commit() is a synchronous submission, which will directly execute IO operations in the UI main thread. When the write operation takes a long time, the UI thread will be blocked, resulting in ANR; Although apply() is committed asynchronously, when writing to the disk asynchronously, if the onStop() method in Activity / Service is executed, it will also wait for the SP to write synchronously. If the waiting time is too long, it will also cause ANR problems. Let's expand on apply():

Finally, the apply() function is executed in SharedPreferencesImpl#EditorImpl.java:

There are differences in the implementation of QueuedWork class between Android versions above 8.0 and below 8.0:

It can be seen that no matter before or after 8.0, waitto finish() will try to get the task from the Runnable task queue. If any, it will be taken out and executed directly to see where waitto finish() is called:

Therefore, although apply() writes to the disk asynchronously, if it executes onStop() of Activity/Service at this time, it may still block the UI thread and cause ANR.

Voice over: the ANR problem caused by the use of SP can be optimized by some Hook means, such as byte publishing   Today's headline ANR Optimization Practice Series - * * * * bid farewell to SharedPreference waiting( https://mp.weixin.qq.com/s/kfF83UmsGM5w43rDCH544g ). The SPS used in our project are also optimized according to this method, and the optimized effect is still significant. Therefore, the project has not migrated the SPS (such as migrating to MMKV or DataStore), but it does not affect us to learn new storage postures.

Through the above code, we have successfully created Preferences DataStore, where preferencesDataStore() is a top-level function, including the following parameters:

After the above code is executed, a file named pf will be created under / data/data / project package name / files /_ The datastore files are as follows:

You can see that the suffix is not xml, but. preferences_pb. Here's a point to note: you can't write the above initialization code into the Activity. Otherwise, when you repeatedly enter the Activity and use the Preferences DataStore, you will try to create a. Preferences with the same name_ Pb file, because it has been created once before, when an attempt to create a file with the same name is detected, an exception will be thrown directly: java.lang.IllegalStateException: There are multiple DataStores active for the same file: xxx.You should either maintain your DataStore as a singleton or confirm that there is no two DataStore's active on the same file (by confirming that the scope is cancelled). The error reporting class is under Android X / datastore / core / singleprocessdatastore of Android x.datastore: datastore core: 1.0.0:

Where file is the file generated through File(applicationContext.filesDir, "datastore/$fileName"), that is, the file address of Preferences DataStore to be operated in the disk. activeFiles saves the generated file path in memory. If it is judged that the file already exists in activeFiles, throw an exception directly, that is, duplicate creation is not allowed.

Store through the bookdatastorepf.edit (transform: suspend (mutablepreferences) - > unit) suspend function, which accepts the transform block and can update the status in the DataStore in a transactional manner.

Flow < bookmodel > is returned through bookDataStorePf.data, so a series of data processing can be carried out through flow in the future. When reading data from a file, if an error occurs, the system will throw IOExceptions. You can use the catch() operator before map() and issue emptyPreferences() when the exception thrown is IOException. If there are other types of exceptions, re throw the exception.

Note: when accessing data in Preferences DataStore, the Key is of preferences.Key < T > type, and t can only store Int, Long, Float, Double, Boolean, String and set < String > types. This is limited to the getValueProto() method of Android / datastore / preferences / core / preferencesserializer class participating in sequencing:

You can see that in the last else logic, if it is not the above type, exceptions will be thrown directly. Because the Key is of the type of preferences.Key < T >, the system packages a layer for us by default, which is located in android.datastore.preferences.core.preferenceskeys.kt:

Because the above declarations are in the top-level function, they can be used directly. For example, if we want to declare a String type preferences. Key < T >, we can declare it directly as follows:

If you want to migrate an SP, you only need to add the produceMigrations parameter in the Preferences DataStore construction phase (the meaning of this parameter has been described in the creation phase) as follows:

In this way, when the build is completed, the content in the SP will also be migrated to the Preferences DataStore. Note that the migration is one-time, that is, after the migration, the SP file will be deleted, as follows: 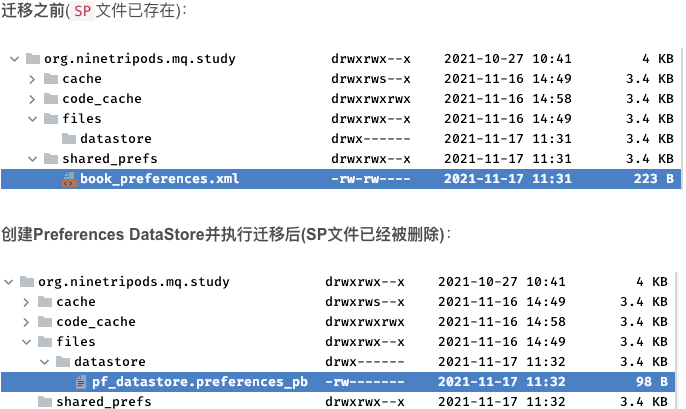 One disadvantage of SP and Preferences DataStore is that it is unable to define the schema and ensure that the correct data type is used when the access key is used. Proto DataStore can utilize Protocol Buffers( https://developers.google.com/protocol-buffers/ )Define a schema to solve this problem. Protobuf protocol buffer is a mechanism to serialize structured data. By using the protocol, Proto DataStore can know the type of storage and provide the type without using keys.

There seem to be a lot of libraries that need to be configured or imported. You can consider putting these configurations into a single module.

Just define the way of data structure once, and the compiler will generate source code to easily write and read structured data. We declare the path of the proto source code address in sourceSets {} of the configuration dependency in src/main/protobuf. All proto files should be in the declared path:

After the above code is written, execute build - > rebuild project, and the corresponding Java code will be generated under the path configured by generatedFilesBaseDir, as follows: 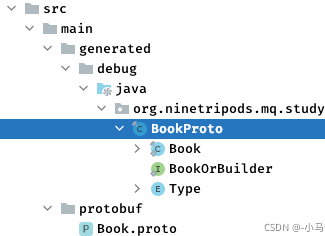 3. Create serializer
The serializer defines how to access the data types we define in the proto file. If there is no data on disk, the serializer also defines a default return value. As follows, we create a serializer named BookSerializer:

dataStore is a top-level function. The parameters you can pass in are as follows:

After the above code is executed, a file named BookProto.pb will be created under / data/data / project package name / files / as follows:

Proto DataStore provides a suspend function DataStore.updateData() to store data. When the storage is completed, the coroutine is also executed.

Proto DataStore fetches data in the same way as Preferences DataStore and will not be repeated.

Directly compare the SP given by the official with DataStore: 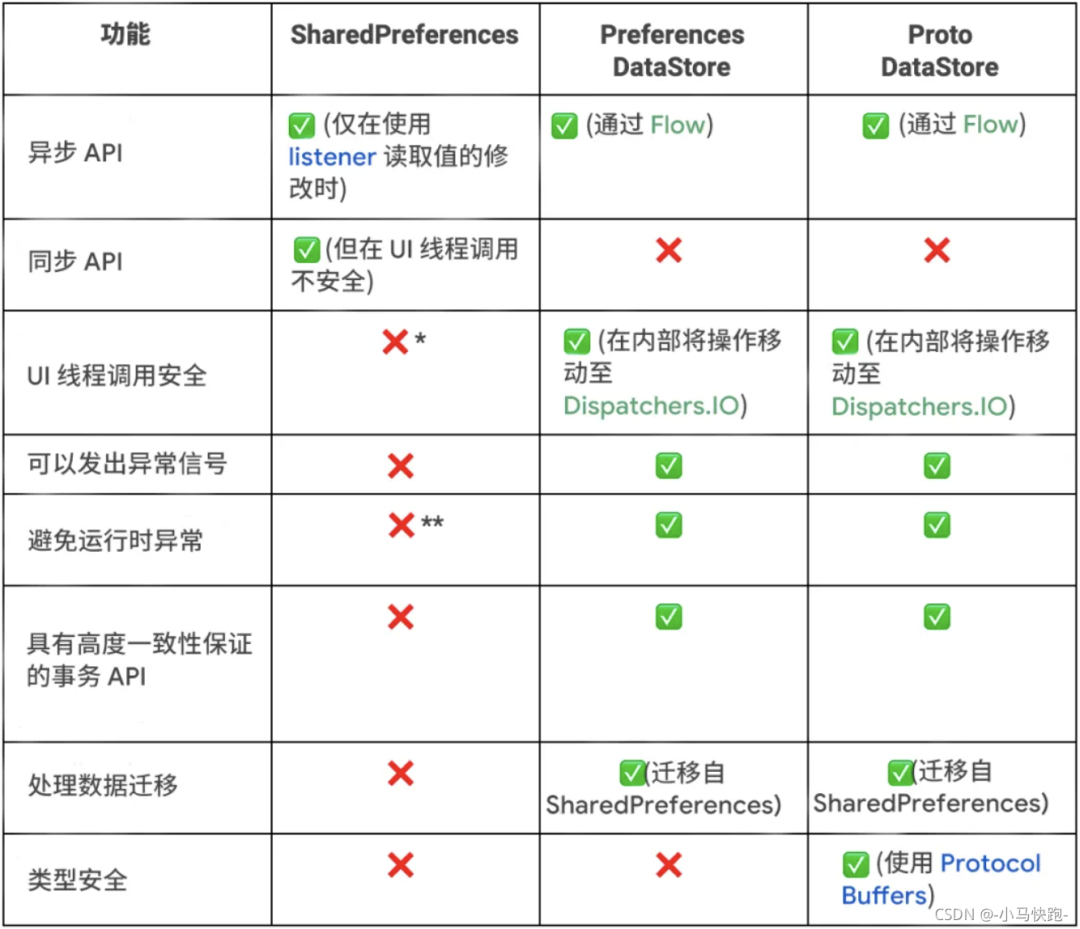 Pay attention to me and share knowledge every day~