1. Before the thread is unlocked, the value of the shared variable must be flushed back to main memory
2. Before a thread locks, it must read the latest value of the main memory to its own working memory
3. Locking and unlocking are the same lock

(2) Atomicity. It is found that the following output cannot get 20000.

If two threads execute at the same time, method01 and method02. If thread 1 performs method01 reordering, and then switched thread 2 executes method02, different results will appear.

Prohibit instruction sorting
volatile implements the optimization of prohibiting instruction reordering, so as to avoid the disorder of program in multi-threaded environment

The following is the schematic diagram of the instruction sequence generated after volatile write is inserted into the memory barrier under the conservative strategy: 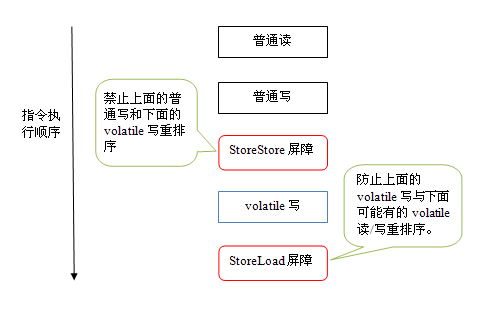 The following is a schematic diagram of the instruction sequence generated after volatile read is inserted into the memory barrier under the conservative strategy: 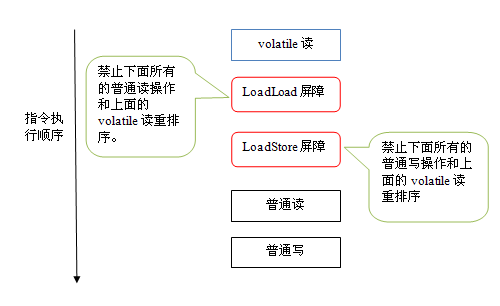 If volatile is not added, it is not necessarily thread safe because of the existence of instruction reordering. Adding volatile can prohibit instruction reordering. The reason is that when a thread performs the first detection and the read instance is not null, the reference object of * * instance may not have completed initialization** instance = new Singleton() can be completed in the following three steps.

There is no dependency between steps 2 and 3, and the execution result of the program does not change in a single thread whether before or after rearrangement. Therefore, this optimization is allowed and rearrangement occurs.