When I first learned stata, I was quite confused about the logic of stata output, because when I learned python and cpp, the output functions were very simple, and the common commands of statac such as asdoc, outreg2, logout and esttab were often unclear when they jumped out, and I didn't know why they were used in the code.
This article is to sort out some common output commands, which can reduce the difficulty of understanding when studying subjects such as econometrics.

This article mainly combs the commands, including but not limited to asdoc, outreg2, logout and esttab, and mainly introduces their usage. The above commands can be used to install updates through the ssc install command name and replace

Generally speaking, beginners of stata can pay more attention to logout and asdoc, and those who pay attention to research can learn more about esttab and outreg2. 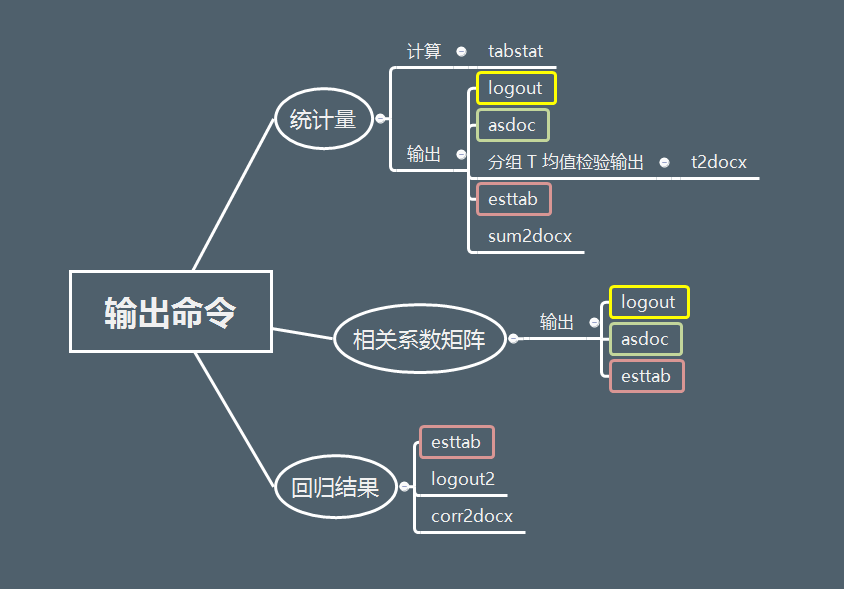 logout outputs the above basic statistics table to Word/EXCEL

asdoc is another powerful output method. sum stands for summarize. The result output of commands such as summarize, correlate, tabstat, cross tabs, regions and t-tests can be obtained through this method. Just add "asdoc" in front of it
asdoc can also fuse multiple regression results into a table and keep snowballing; it can also make grouping descriptive statistics according to classification
If you want to know more about the asdoc command or if you don't understand it, you can stamp this link asdoc: Stata result output is another sharp weapon!

If you want to use Chinese variable names, you can try sum2docx, which can also control the decimal places like esttab, but the disadvantage is that you can't see the results in the command interface.

The above command can replace the variable in the varlist local variable '' with its own variable when running.
For example:

The asdoc command is relatively simple, but it has many limitations. There is no way to customize the output of asterisk and p value. It is suitable for beginners

corr2docx supports Chinese, but other commands do not.

When outputting logout, there will be serial problems, and there is no way to output the title, so it is troublesome and is not recommended

Methods for customizing asterisks: pwcorr_a and esttab (for the use and extension of esttab, see this article to explain the understanding method and logic of commands)

The command esttab that most conforms to the chart format of general contributions, research and various documents is as follows (pay attention to the position of statistics and variables in the table) 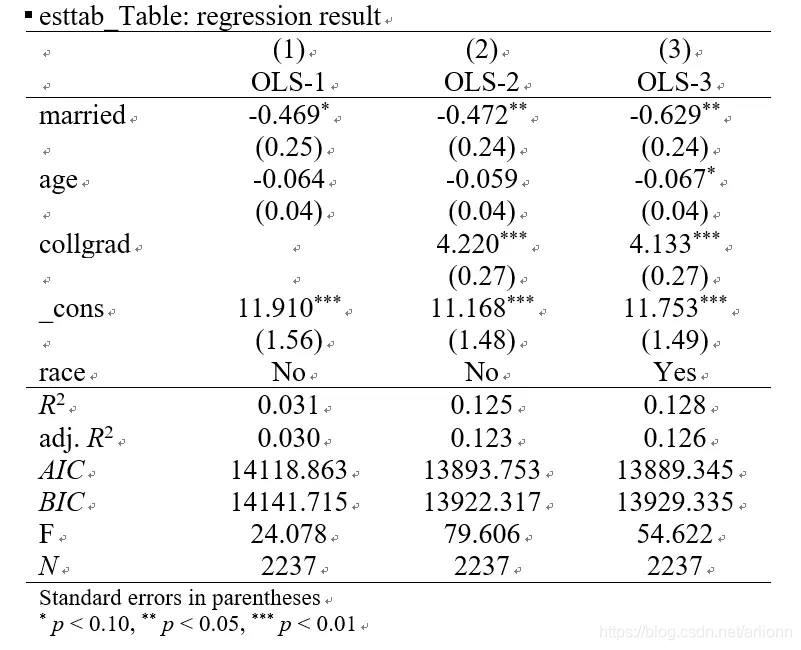 The command is as follows:

The pictures output by the asdoc command are not as regular as the former, and variables cannot be sorted, which can be understood as "snowballing multiple times"“

However, if the research only needs to output R^2, it does not need F statistics, and it does not need to add statistics after the third regression, you can use asdoc, which is more convenient. The results are shown in the figure. (for details, please see the figure.) asdoc: Stata result output is another sharp weapon!
)